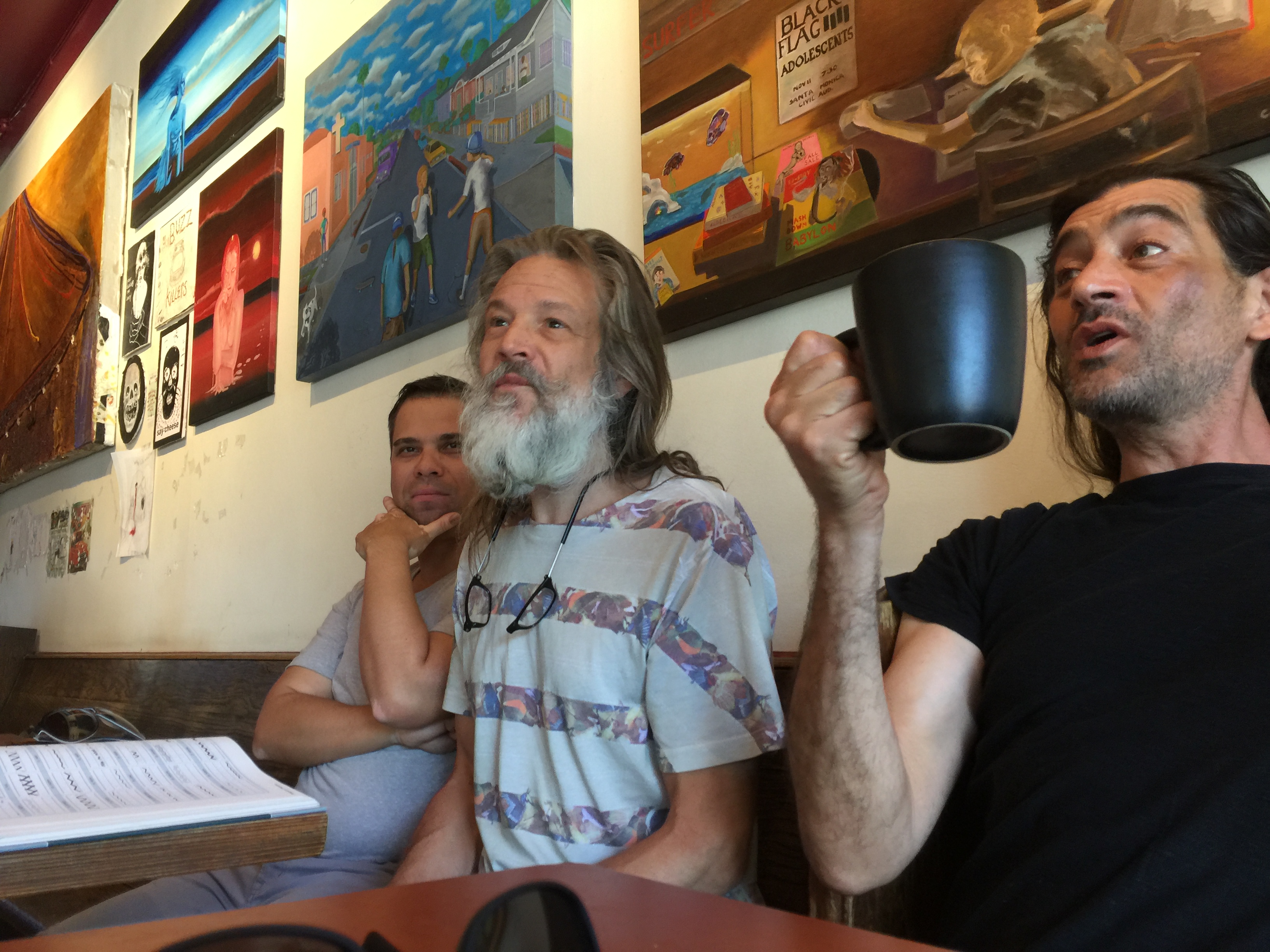 Tonight, June 23, Abbot’s Habit will throw a farewell party so Venice can say goodbye to the 24-year-old AK OG. The rent is going up, so the café, at 1401 Abbot Kinney Blvd., is moving out. By July Abbot’s Habit will be gone forever. The last day set for June 28, 2017.

“Coffee is over,” Acupuncturist, Venice local, and Abbot’s Habit regular Andrew C Whitelaw told Yo! Venice. “After this, we die,” added Geo Beck, a local blogger from The Abbot Skinny. Beck and Whitelaw are regulars who haunt Abbot’s Habit, a couple of characters who are part of the motley crew that is the Abbot’s Habit crowd.

“It’s a place that writers, painters, musicians, philosophers, and carpenters all sit together shoulder to shoulder. You never know who you’re next to, what they’re creating, or where they’ll end up in the world,” said author Joseph Voelbel.

The people are what has made Abbot’s Habit so unique.

The hum of the generator at Abbot’s Habit is as constant as the conversation. “That sound that makes us yell out loud to each other to be heard,” said Whitelaw.  And those who have sat to chat at Abbot’s Habit have found a home at the café within a world that, the men all agree, is becoming increasingly disconnected. “We want to talk. We want to have that family feeling. But, most folks are dissociated,” said Beck.

Silicon Beach laps at the edges of the Abbot’s Habit island and Voelbel laments that too many people live derivative lives. “They’re channeling their consciousness into 140 characters. This is a place where people can exist beyond those confines,” he said.

The conversation flowing between the men swirled around to the importance of conversation. And saving money on therapists.

“Ultimately you know all those problems you have when you’re alone at night, and there’s no-one to talk too? We all have this place to work that out…It’s like the last outpost of humanity in Venice. After this, it’s all Snapchat and kids that don’t talk to each other,” said Beck.

As she finished taking an order at the register, Café owner Nina told Yo! Venice she was done talking. “What do you want me to say? I’m heartbroken.” Looking out at all the familiar faces sitting in the cafe she said by closing Abbot’s Habit she felt she was abandoning everyone who had been so loyal.

Abbot’s Habit regular, David Quadrini, said he knows the feeling. “I’ve closed a lot of places that were like this,” he said of the galleries he’d set up over the years as an art dealer. He explained how it is never easy “whenever you choose to not do something anymore that fills a void of loneliness. Because people meet each other in very few places now.”

Nina said she had added guilt.

“I feel bad for the people who had a business in this space before me. I never really thought about it much before, but now I realize. This neighborhood was predominantly Black, and I displaced someone’s business when I started this. At the time people told me I was bringing change for the better, but I don’t know. That was just an opinion. Was it better? In hindsight, I feel bad,” she said.

As for the current surge of gentrification in the neighborhood, Quadrini told Yo! Venice he had been living in a “construction valley, between two giant construction projects that have been going on for two years now.” Consistent development and constant shuttering of old favorites make the idea of staying in Venice less appealing to Quandrini. “It’s just like one by one everything closed. Like Hal’s closed, then Roosterfish was gone…this (Abbot’s Habit) didn’t seem possible to go. But it is going.”

The men appreciate the irony that Abbot Kinney himself had a dream to turn Venice into the place it is becoming. “Abbot Kinney was a real estate guy who wanted tourists to come; this is his dream realized. The tragedy is, we’re losing the American Dream as it applies to starving artists,” said Whitelaw.

The Greek philosopher Heraclitus said everything gives way and nothing stays fixed. The regulars of Abbot’s Habit knew the end was inevitable. “Abbot’s Habit is the last domino to fall on this street, and it happened faster than any of us thought it would,” said Whitelaw.

“How long could a ghetto on the ocean have remained a ghetto on the ocean? But, there were no stop gaps there was nobody trying to maintain the culture, except locals. But nobody in our representative government and then our local business owners and the local landlords they let money rule the day, so we have the next Mall of America,” Whitelaw added.

There is sadness that Abbot Kinney Boulevard is becoming less and less a street for locals.

Beck likens Abbot’s to “the last French Cafe in an existential novel. The coffee shop at the end of the universe. And now that portion of the universe is going to have a boutique for 17-year-old Swedish tourists. And how useful is that to us?” he said.

“In some way, it’s good that it’s closing because it’s going to force change. And change isn’t bad,” said Voelbel.

“Whatever. It’s going to force change my ass,” said Beck.

“Oh, so you think it’s shit? You don’t want it? You were just saying yesterday how there could be some good come out of it,” said Voelbel.

“Of course there can be some good come out of everything, but this is going to end. Our meeting over here, us throwing ideas back and forth…” said Beck.

Adding his thoughts Quandrini chimed in, “I mean these types of change are seldom good…let’s face it anyone who has lived in Venice for more than 5 or 6 years sees changes that are deeply uninspiring.”

Listening to the mishmash group of men who have become unlikely friends, it’s clear the end of Abbot’s Habit will mean more than the end of coffee. Whitelaw brings up the GQ article from April 2012 that is often credited with beginning the end in Venice. “They said Abbot Kinney was the coolest block, but it was the people that made it cool. Not the street.”

So where to next? “Cow’s End?” suggests Beck.

May the conversation continue…