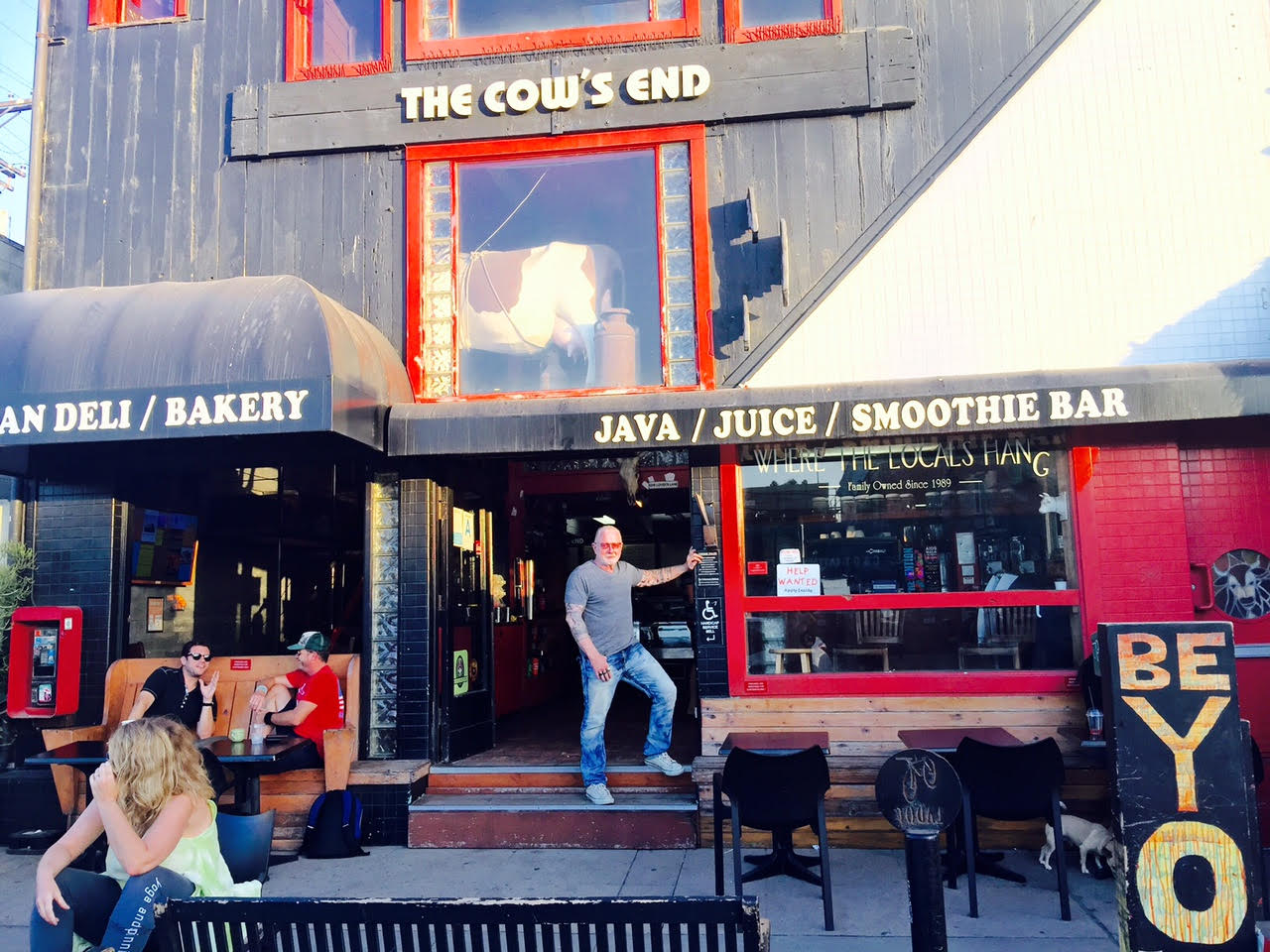 It would not be surprising if Venice cafe owner, Clabe Hartley, was to say he’s thinking of taking up criminal law. This summer he’s served an intense internship into assault related crimes.

In March, 31-year-old Jonathan Lemons pleaded not guilty to biting off Hartley’s fingertip after an altercation blew up between the two men outside Hartley’s Cow’s End cafe on Washington Blvd.

Cafe patrons had helped stop the attack. Venice local Kelly Ott, who used to work as Chuck Norris’ stunt man said, “He was clawing at Clabe’s eyes. I got him in a hold from behind and then everyone, the man, Clabe, and I fell to the ground” This is when Ott noticed blood all over his arms, he looked up to see “blood spurting out of Clabe’s finger,” which could not be reattached.

Hartley now sits on a high stool at a table that runs the length of the inside window of the cafe. He prefers the advantage this viewpoint provides. Sitting to the front left, his back to the wall, Hartley watches customers approach, on guard for anyone suspicious.

Just a week before, Hartley had been attacked for the second time this year by another transient. Mark Scanlan, 44, like Lemmons had been disturbing customers seated outside on Washington Blvd. He is currently in custody on three counts of felony assault with a deadly weapon. His bail set at $90,000.

Hartley sits with five staples in his head. Another scar is  forming, a war-wound received in what is fast becoming a battle between the business owners of Venice and those that call her streets their home.

Speaking of his most recent attack, Hartley explained it began with Scanlan harassing customers and ended with the man rushing at him with a cafe chair.

As with many of the more disruptive members of the unhoused community around Venice, mental heath is often a factor.

“It’s possible that this second guy [Scanlan] has, and I’m not an expert on this, but it’s possible that he may have real mental psychiatric problems because he’s talking to an imaginary figure. But again, not being an expert, I hear that some of these people they’re on things like meth or bath salts and they can get weird that way too,” Hartley said.

In fact, when Hartley had sprayed Scanlan with pepper spray, he found the man was not affected.

“Before he threw the chair I was out talking to him. I thought he was talking about someone else for a while, I don’t know, but he said, ‘He’s gotta die, he’s gotta die. I gotta kill him, I gotta kill him’ and then he came at me and said, ‘there’s the cancer killer, I gotta kill him.’ When he did that, I had my pepper spray in my hand, and I was feeling him, and he seemed to be really out there so I sprayed him. He got within two feet of my face before I sprayed him, and when I did he said ‘Is that all you got?’ This was strong stuff,” Hartley said.

Often in cases where someone is under the influence of a drug like meth, that person can display almost superhuman strength. One Yo! Venice source spoke of seeing six burley LAPD officers struggling to hold down a skinny man high on meth.

In July this year Jason Davis, 41, died in hospital after being gunned down by police on the patio of Groundwork Coffee Co., at 671 Rose Ave. The shooting occurred only after police had tried to subdue Davis with pepper spray and a Taser.

“Davis stood up and began to aggressively approach the officers. One officer deployed a Taser, however it did not have an effect on Davis. Davis continued his advance on officers while still armed with the knife and an officer-involved shooting occurred,” police said.

Sources told Yo! Venice Davis had been high on meth.

There has been an influx of homeless to Venice who call themselves “travellers.” They come, sometimes for only a couple of weeks. Drawn to a Hippie-like existence that most often involves drugs, alcohol, and camping on the grassed areas along Ocean Front Walk. These “travellers,” more transient than the core group of Venice homeless, do not appear invested in the Venice community. Instead they seem to be here to take what they can get.

Long-time homeless man known around Venice as “Buddah” said he prefers the term “housing challenged.” He spends his days on a grassed area in front of Ocean Front Walk at Horizon Ave.

“I have a Venice address my birth certificate,” Buddah said.

Buddah grew up with his mother and Japanese grandparents in a home on Brooks and 6th St. when the Silicon Beach wave was not even a ripple, and Los Angeles identified Venice by the less enticing label of “Slum by the Sea.” When Buddah’s grandparents had bought their house 6th Ave. was still a canal.

With age came medical problems for Buddah’s grandmother, and the family home was sold in the late ‘90s to pay for her care. With that, Buddah was out of the Venice housing market. However he hasn’t any regrets: “I’m living the dream. What are you kidding me? I ain’t got nothing to do but worry about when I’m going to go skate in the part with the kids,” he said.

Across the grassy knoll a young traveller girl starts to yell. It’s loud. She’s screaming into the face of a fellow traveler. It’s public outbursts like these that have not just the Venice residents and business owners but also the long-time local homeless uncomfortable.

“They confuse me with that dude ranting and raving outside that window at 3 in the morning. I’m not that. I’m the guy that comes and takes that guy, escorts him to the alley, and sees him on his way. I don’t want that to reflect back on me. That’s the respect of the neighborhood,” Buddah said.

Back outside Cows End a young traveller is panhandling. His name is Divin. He had been sitting with friends on the pavement to the west side of Cabo Cantina. Strumming a guitar and holding a sign asking for cash, he’d called out to a woman passing by, “Can I get a g-string?”

Divin asks customers outside Cows End for a dollar. He seems on edge, twitching as he walks. Glaring, he fixes his darting eyes a moment on anyone who tries to avoid his gaze.

“There’s one right now, just here,” Hartley said. “He’s really pressuring this guy right now. He wants money from him, you know? He wants money. He’s very in his face. That’s a perfect example of these aggressive ‘travellers’ – they get violent. Look at his whole body language. I don’t know what he’s on. He’s on something.”

As he heads north up Ocean Front Walk, away from Washington Blvd., Divin calls out to anyone who will listen: “I was on the news for being homeless” he said. No one looks comfortable enough to stop and hear his story. Tourists scurry past, heads down.

“I guess like down there they don’t like vagrant traveling kids,” he said motioning toward Washington Blvd. “We need money, we’re just having fun and kids just go and break windows and stuff for their s**** and giggles, but it’s ruining what we do. Like we just want to have fun and drink beer, and they’re like breaking stuff and making everyone hate us and it’s stupid.”

Divin is unaware his aggressive panhandling to get money for beer makes him part of the problem he talks about.

It’s a problem business owners along Washington Blvd. are keen to clean up. Around the time of the first attack on Hartley, the wheels had already been set in motion to form the Washington Square Business Improvement Group.

A consortium of business owners along Ocean Front Walk are also well into the planning stages of setting up a business improvement district along the Boardwalk from Navy St. to Venice Ave. They have so far raised a small amount of initial capital, but ultimately annual costs are estimated to be $2 million.

While it’s early days for the BIGs and BIDs of Venice, just like the flyers that are posted in the days leading up to a Friday morning sanitation sweep, business owners are putting up notice. They want to start cleaning the streets.

So, what then of the real homeless left in between? As tensions between the homeless and business owners in Venice rise, Hartley wants it made clear that he doesn’t “blame the homeless. Some need our help. This was the work of a psycho. This is what we need to deal with.”

Buddah had a suggestion in regards to the travellers.

“I think they need to go back to where they’re from and learn how to say, ‘Thank you. May I? Please.’ It helps a lot,” he said.