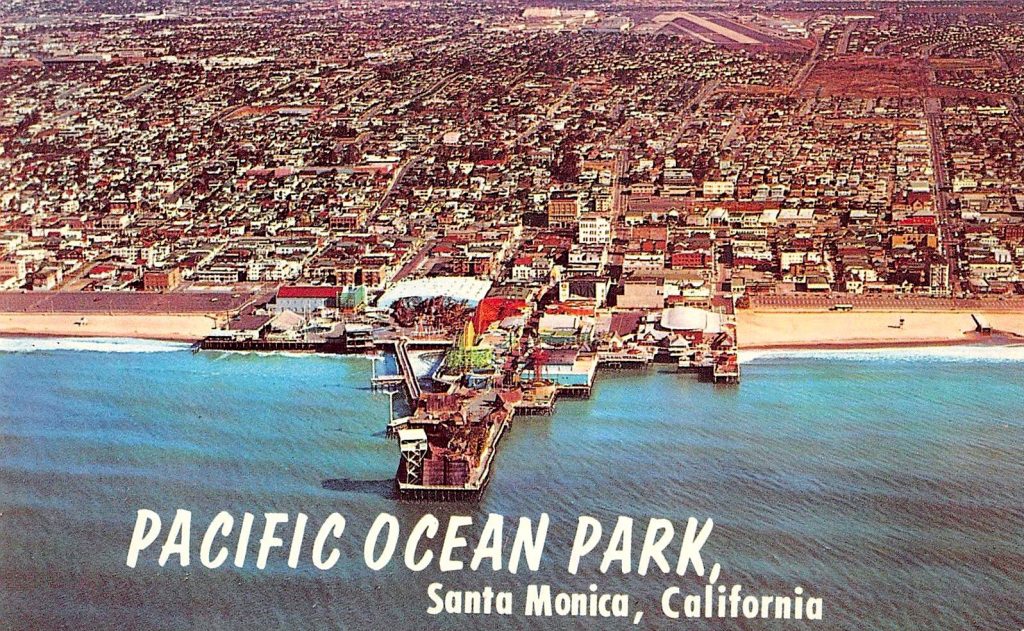 It’s the Holidays again, and we hope your spirits of joy and happiness are being well celebrated! In continuation of about remembering Santa Monica’s past and influences on local development here, we would like to turn the page back once again to memorialize a moment in time that was positive and festive in our city’s history.

Most of us know or have heard of Pacific Ocean Park, widely referred to as “P.O.P.” (not to be confused with Pacific Park). P.O.P., in its time, brought joy and happiness to city residents, families, and visitors from all over. It was like a little mirror, an extension of the happiest place on earth, Disneyland, but closer for most Angelenos, and it was at our beach!

P.O.P. opened more than half a century ago on Saturday, July 28, 1958, with an attendance of about 20,000. The next day, it drew 37,262, outperforming Disneyland. Admission was 90 cents for adults. This was a local amusement park that transformed the old carnival-style beach and pier concepts into a new Space-age architecture and Science fiction themes of the late 1950s representing America’s optimism for its future, full of our culture’s promises and dreams for a better tomorrow. It was a place full of fun, hope, happiness, and fantasy, a place to come together and enjoy, and that’s what a great amusement park is all about.

There were notable contributors to its concept and design; for example, the Mid-Century Architectural firm Pereira & Luckman, which developed many noted structures in Southern California, including the iconic Theme Building at Los Angeles International Airport, CBS Television City, and Marineland of the Pacific. These were a lasting part of our unique identity here in Los Angeles, and P.O.P. symbolized Santa Monica and relaxed, fun beach living. Fred Harpman, who had designed portions of Disneyland’s Main Street, also had a major role in its design.

Many of P.O.P.’s designs were examples of what is known as “Googie Design,” The iconic and unique genius of this design style in a relatively brief era in our history was represented there and should be remembered. For example, there was a sizeable starfish-shaped structure at the entrance (mirroring the LAX icon), creatively mixing nautical elements with the then-inspired modern space age-sci-fi. Some of the famous rides included:

Also, there was the Fisherman’s Cove and the International Promenade, with international restaurants and stores.

P.O.P. symbolized a unique and special time when America dreamed of how once impossible things could become a reality if we had the vision, belief, and determination to work together for the long haul rather than settling for an easier objective in the short-term or, worse yet, giving up. Let us acknowledge this and memorialize this significant time in our history.

P.O.P. was also a place to hear live music ranging from Frank Sinatra and Lawrence Welk to Pink Floyd and Janis Joplin, reflecting our changing cultural spectrum. It was also a place that supported community events. It played an important positive and constructive role because it reinforced the Santa Monica image of being a beach location, a place to come to relax and enjoy the happier and simple things that Santa Monica offers. It marked our unique contribution to the fabric of Los Angeles.

Some years after, there were higher-than-expected maintenance and repair costs coupled with the daunting economic pressures of redesigning and building new rides and attractions to keep visitors coming. All that was combined with management issues and a decline in income and visitors, which was exacerbated by a real estate development “vision” to clean up the area, ripping down numerous original (historical) beach bungalows and other vintage architecture to build new high-rises (Santa Monica Shores), tearing up many of the roads leading to P.O.P., terminally hindering traffic access and helping to hammer the final nail in the coffin.

There were monies owed for rent and back taxes and creditors, including the City of Santa Monica, who moved legally to collect, and P.O.P. closed on October 6, 1967, and its assets were auctioned off. Some of the rides were purchased and still exist elsewhere.

The proceeds were used to pay off creditors, and then the dilapidated ruins became a favorite surfing area and hangout for derelicts and drug users. Then a series of fires, criminal activity, and vandalism finally destroyed it completely. It was demolished in the winter of 1974-75. What remains are only some underwater pilings and signs warning of them; to the north, the original Santa Monica Pier features a newer amusement park, similarly called Pacific Park.

Nothing can be done about what’s happened. However, we can make a symbolic memorial to P.O.P., documenting its existence for our residents and visitors. Santa Monica residents like Richard Orton have made an attractive proposal for Santa Monica to build a small P.O.P. memorial with a design to be approved describing its history. This would be located across from the Santa Monica Shores near the bike path near P.O.P.’s location. It would be a place to read about the location’s history, see some photos and have another place to sit and relax.

Many residents here during that time would appreciate the value of acknowledging this special time in history. Since that section of the beach is relatively empty, there would be minimal impact on the area. P.O.P. was a great place, and it deserves homage rather than to be left as a wisp of memory. As it was one of the happiest places on Earth, it’s not much to ask.

By Yo Venice Staff December 20, 2022
in Opinion
Related Posts