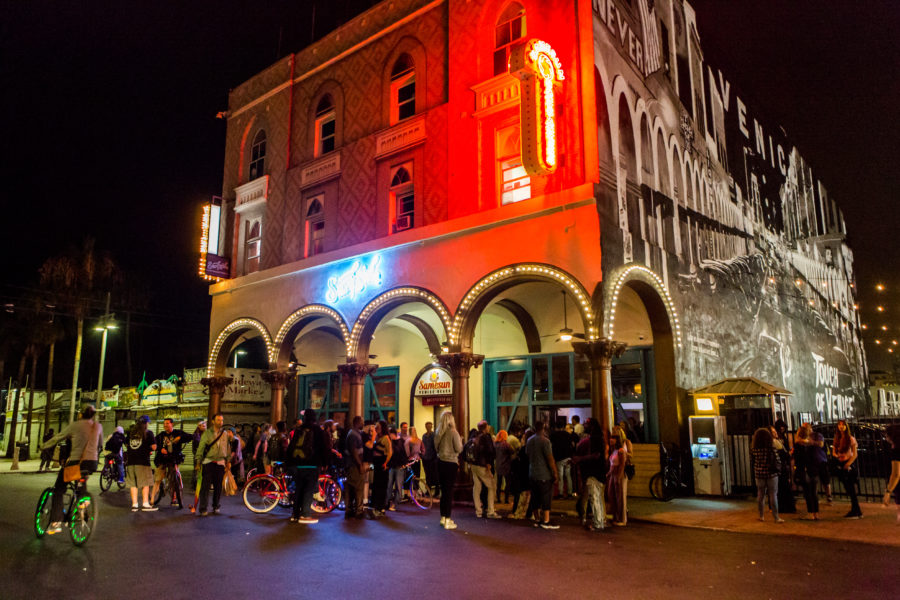 A clash of words ended in gunfire outside Surfside Bar and Grill at 23 Windward Ave., in Venice just after 10 p.m. on Wednesday evening, March 7.

Pacific Division Watch Commander Sergeant Scotty Stevens told Yo! Venice the shooter “fired nine rounds at the victim, who was struck multiple times in the upper body.” According to witnesses, the shooting started with an argument inside the bar. “Witnesses stated that the suspect had been inside the bar for some time,” said Stevens.

Venice Neighborhood Council Homeless Committee Chair, Will Hawkins was in the bar with friends, waiting to sing at Surfside’s open mic night at the time of the shooting. “A tsunami of people rushed from the front of the bar towards the back where we were sitting in a booth,” he told Yo! Venice. After helping his friends escape to the back alley, Hawkins went to investigate.

Between cell phone video and security camera footage the scene Hawkins couldn’t see was two men having words, words escalated to a shoving match and ended with the shooter taking a few steps onto the street and firing several shots back toward the bar.

According to Hawkins, LAPD arrived in “less than two minutes.” Hawkins made his way through the flood of people toward the front of the bar. “I smelled gunpowder and thought maybe someone had thrown firecrackers into the bar.” Once outside, Hawkins saw otherwise. “I saw a man on the ground bleeding from his chest. His friend was will him.” Hawkins joined as an extra set of hands, applying pressure to the wounds and helping calm the victim until paramedics arrived.

With the shooter fast leaving the scene, police gathered witness statements. “Everyone said the same thing; a tall white guy who seemed to have mental health issues,” Hawkins recalled.

The following day, LAPD arrested 46-year-old Robert Mewhorter in connection with the shooting. Identified from video footage and witness descriptions, Mewhorter “was spotted the next day near an encampment where he lived on Grand” Avenue in Venice. According to Stevens, Mewhorter was living in the encampment. “He was arrested without any problems. A female that was with him was also detained and interviewed,” said Stevens.

Detectives interviewed Mewhorter at Pacific Division station and according to Stevens “his statements led to his booking for attempted murder.” His bail set at $2.08 million. Stevens told Yo! Venice that police have “no information where he got the gun, how long he had it, or what he did with it after the shooting.”

The shooting upset many in Venice who believe the local homeless encampments provide shelter to dangerous people.

Hawkins drew attention to a statistic from the last Los Angeles Homeless Services Authority (LAHSA) Homeless Count that found over 40% of those living on the streets in L.A. are mentally ill.  After overhearing witnesses say the shooter appeared mentally troubled and later finding out Mewhorter was living in a Venice encampment, Hawkins said of L.A.’s homeless situation, “We see this is more than just a housing issue this is a mental health crisis that is unfolding before us.”

The shooting, Hawkins believes will spark a broader conversation in Venice. “To ignore the sheer volume of people who are mentally ill who are living on the street is reckless, irresponsible, and immoral.”