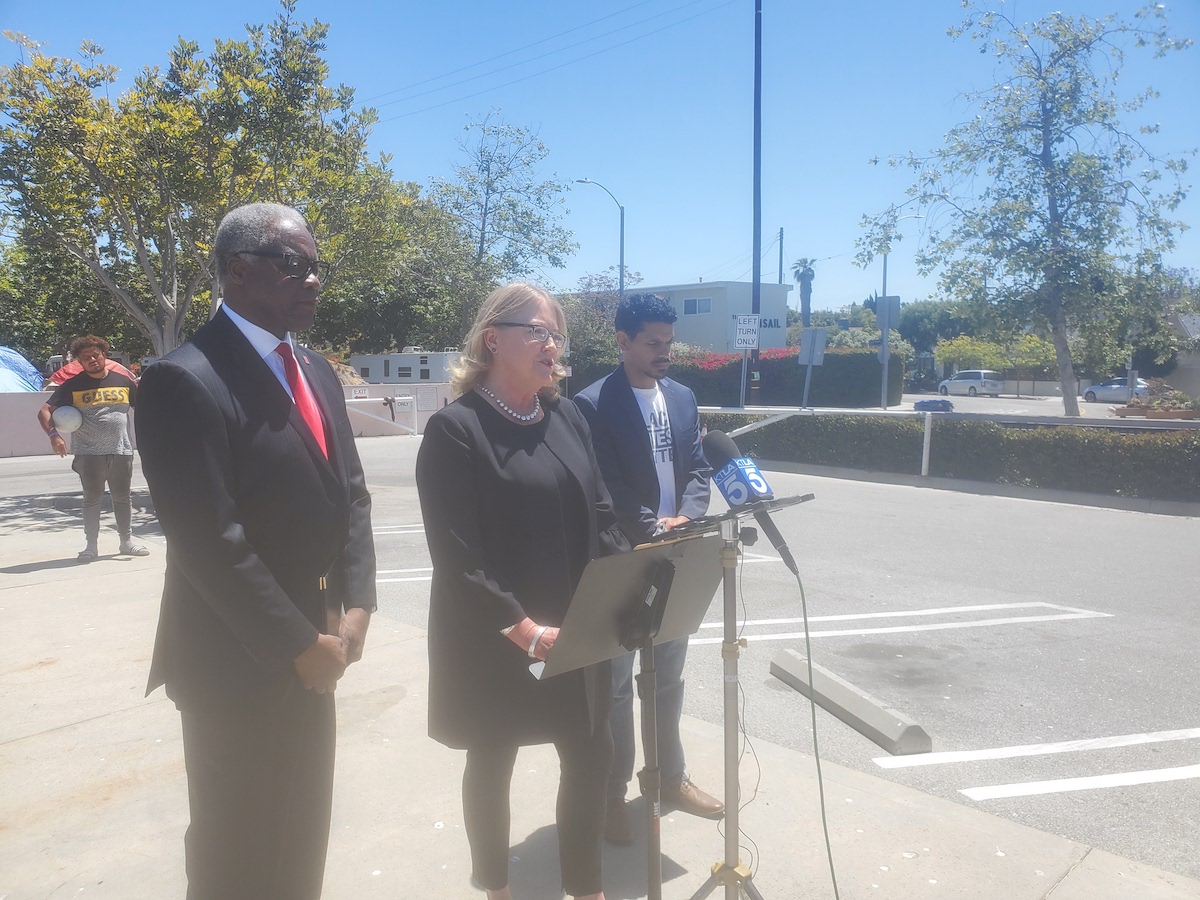 All three call for “Real Data Reform” to solve the homeless equation here in Venice!

An unusual coalition of candidates visited Venice recently to discuss the ever-growing encampment crisis at Centennial Park that has been overrun with make-shift structures, stationary vehicles and at least one-hundred tents as the population of homeless is growing and surging by the moment!

The trio was led by real estate professional and former NFL/CFL football standout Mel Wilson, who proclaimed to the media in attendance that “enough was enough,” and that these third-world conditions are “no longer acceptable.”

Wilson, a product of Northridge State who played a policy-making role in the administration of former LA Mayor Richard Riordan called upon the media to cover all the candidates and balance out the discussion that has been seemingly overrun by the tens of millions of dollars being spent by the self-funding candidacy of billionaire developer Rick Caruso, who today picked up the endorsement of Councilman Joe Buscaino (CD-15) in which many believe the outgoing legislator will play a critical role in a potential Caruso Administration.

Buscaino, who launched his race in Venice has been mentioned as being considered for one of the top slots with Caruso and some believe he could be his chief of staff.

The Caruso candidacy took the wind out of the sails of the Buscaino effort as they seem to mimic each other in terms of message and proposals, and his dropping out was neither a surprise and a Caruso endorsement was expected.

Wilson, who spoke passionately about the plight of the homeless emphasized his intentions of not criminalizing the unhoused, but would support using technology to account and track those on streets in venues like Centennial Park.

Drafted in the 1976 NFL Draft by the New York Giants, Wilson roomed with Hall of Fame linebacker Harry Carson and played for NFL head coaches Bill Arnsparger and John McVay.

Wilson also played for Calgary in the CFL as well.

Allison Holdorff-Polhill, a former school board aide to Nick Melvoin and candidate for council in CD-11 also supports data-based technology to track and assist those on the streets and talked about her leadership and proven track record solving complex issues within the LAUSD.

Holdorff-Polhill stressed her background as an attorney, cutting through red tape, navigating bureaucracies and delivering on solutions that will work. Known by many as “The Fixer,” she served in a senior level capacity with current LAUSD Vice-President Melvoin, also on the ballot seeking reelection on June 7th as well.

With the exception of the press, a few onlookers from the encampments came over to watch, several with severe mental issues too incoherent to speak. One homeless individual was a graduate of Venice HS who felt the encampment for the most part for him was safe.

Another homeless individual was in his 30’s and from Honduras and complained about not having the ability to receive his medication on a timely basis and was intrigued that news cameras from KTLA were on hand covering the press conference.

A young couple in their early twenties complained about personal items being stolen and the overall stress that complicates life outdoors.

The other attending candidate was Soni Lloyd, a public school teacher at Venice High School now instructing online due to the COVID-19 pandemic is a strong supporter of “body autonomy” and opposes mandated vaccinations. A former UTLA representative and track & field coach, Lloyd was an All-American track star in college and is married with no children.

Lloyd was more philosophical about the plight of the homeless and did agree on better data results to make more precise decisions from a policy perspective.

Lloyd believes the roots of homeless are weaved in the lack of economic justice, a dysfunctional democracy, the lack of housing, racial inequality and that reparations needs to be part of an overall platform of issues that need to be addressed to end homelessness in places such as Centennial Park.

Lloyd questioned why some 40% of the homeless population is African-American, yet only represent some 8% of the total population of Los Angeles.

All three agreed that the neighborhood that has been saddled with this chronic and expanding homelessness problem and must be given relief, but how to get to that point was a struggle in terms of immediate changes or solutions.

We saw the same lack of progress at the last meeting of the Homeless Committee of the Venice Neighborhood Council that vastly watered down and castrated a motion to remove the encampment based on a 60-day timeline. Several members believed the language was too coarse and what was eventually agreed upon did nothing to address the issue of evacuating the Centennial Park encampment which has driven down visitation at the Library while spiking new crime in the neighborhood. There was talk by some in attendance that there was a shooting last evening, but that could not be confirmed.

With a few interested parties from Centennial Park looking on, I was told yesterday that LA County Sheriff Alex Villanueva was on site Wednesday with a private tour of the situation. It was Sheriff Villanueva who successfully cleaned up oceanfront walk and many in the neighborhood are rooting for him to do the same here.

Nick Antonicello is a longtime Venetian covering the race for mayor and council as it impacts Venice. He can be reached at nantoni@mindsppring.com

By Nick Antonicello May 23, 2022
in Opinion
Related Posts