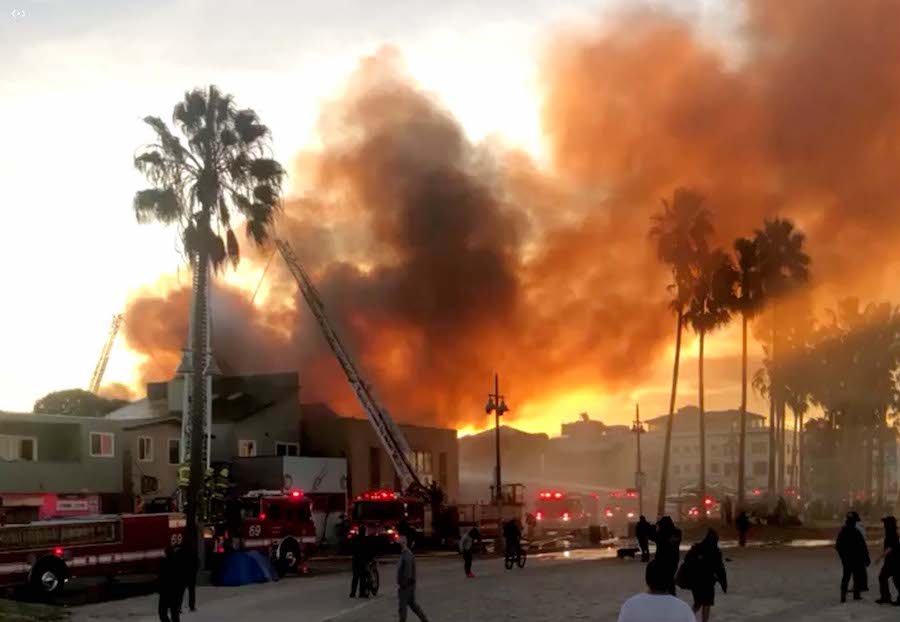 Over 100 firefighters responded this week to a fire that started at a Venice homeless encampment before spreading to a 68-year-old building.

According to the Los Angeles Fire Department (LAFD), the fire was reported at 6:19 a.m. Monday at 800 Ocean Front Walk.

The blaze–dubbed the “Ocean Front Fire”– damaged a 68 year-old, two-story, commercial structure that was vacant when an outside fire at a homeless encampment on the south side of the building extended into the structure. The Department says the fire briefly threatened two nearby structures, including another home.

According to the LAFD, it took 116 firefighters 2 hours and 17 minutes to put out the fire using “largely defensive firefighting operations”.

The LAFD says any contents within the heavily damaged and now unstable 68-year-old building have yet to be identified.

No injuries are currently reported.

“LAFD Investigators are now at scene of what is considered an active investigation,” said LAFD spokesperson Brian Humphrey.

According to LAFD Deputy Chief in Charge of Operations for the West Bureau Armando Hogan, the arson team will make an official determination of cause but noted that during colder weather crews often respond to calls for warming fires at local homeless encampments.

The fire is the latest blaze to break out near a Venice homeless camp.

In Venice alone, six such fires were reported in less than a month between September and October. In addition, just last week a RV went up in flames along Penmar Golf Course.

In the wake of these fires, some of which are believed to be arson, Los Angeles City Council passed a motion last fall calling for a $25,000 reward for information leading to the identification, apprehension and conviction of the person or persons responsible for any acts of arson in Venice starting in September 2020.

This is also the second RV to catch fire in Venice in recent months, following a similar incident in September.