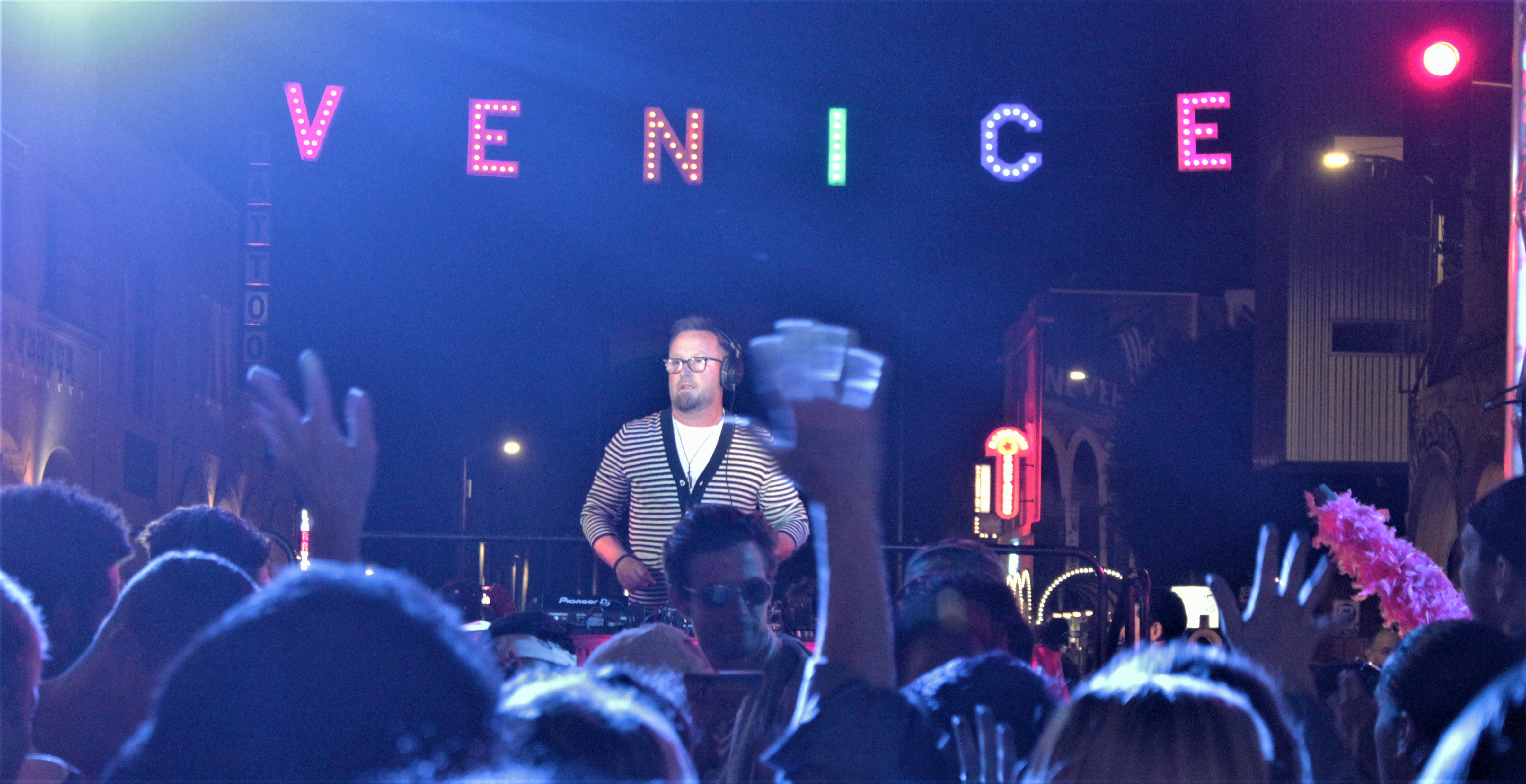 Local residents, organizations and out-of-towners celebrated Pride, Venice-style, during the third annual Venice Pride weekend June 2 and 3. The event included dance, music, a beach cleanup and rainbows as far as the eye could see. In its third year Venice Pride welcomed an award-winning LGBTQ icon to the stage, hosted socials throughout the area and concluded with a block party and sign lighting.

“Everyone is hanging out and having a great time,” said Grant Turck, President and Founder of Venice Pride on Saturday evening. “It is going to be a really exciting night,” he added, explaining that Thelma Houston, the Grammy-winning, disco legend would be performing.

Turck, along with the Venice Pride Board of Directors (a team of nine), work year-round to make the annual Venice Pride Sign Lighting and Block Party possible. The inclusive event attracted thousands of people from across the Westside and beyond as DJs Whitney Fierce and Steve Bott spun an eclectic mix of music throughout the afternoon and early evening.

Among attendees on Saturday were the Stonewall Democrats, an LGBTQ political organization formed in 1975 and the oldest of its kind in the United States. The group endorses political candidates running for office on the local, state and national level; including candidates running for the Los Angeles County Judicial Offices, California State Senate seats, as well as representatives for the United States Congress.

According to Brian Bloom, a member of the organization, candidates seeking an endorsement from the club go through a screening process that includes a “seven-page interview that takes about three hours.” During the event, Nicholas and Brian Bloom and Jake Lewis registered voters.

While some used the event an opportunity to conduct broad political outreach, others such as Raymond “Raytings” Lancione, spoke to attendees about social activities. Lancione, founded the group QWRTY Gamers, an inclusive group of gamers that “game together for good.”

“We’re trying to connect communities, and we want to introduce the LGBT community to the gaming world,” Lancione said.

Started in 2015, QWRTY Gamers now consists of more than 800 members. During Venice Pride the group raised funds for the TransLatin@ Coalition, an organization hosting programs and services in L.A. that include English as a second language (ESL) classes, a computer lab, as well as economic and workforce development.

As the sun set and day turned to night, the Grammy award-winning LGBTQ icon Thelma Houston hit the stage wearing a sparkling white outfit. Her high energy performance was well received by those in attendance. People shouted, cheered and hollered “Thelma, we love you” and sung along to songs like “Ride the Rainbow” and “Don’t Leave Me This Way.” During her set, Houston, now 72, paused to speak with the crowd, stating that she hadn’t even heard of Venice Pride, and jokingly adding “you’ve been keeping it to yourselves,” before jumping into another series of songs. Intermittently, her son Rodney Houston took to the stage for accompanying duets. Prior to Thelma’s final song, Rodney returned to the stage stating, “they said there is not enough light on you,” and then pointed to an oversized pink lever. Thelma then walked across the stage, pulled the lever, and the iconic “VENICE” sign was illuminated, revealing each letter as a color of the rainbow.

After Houston’s set, attendees snapped photos in front of the multicolored sign, the world’s largest rainbow flag still visible in the night sky. The flag, which was raised the day before will tour the world as part of United We Pride.