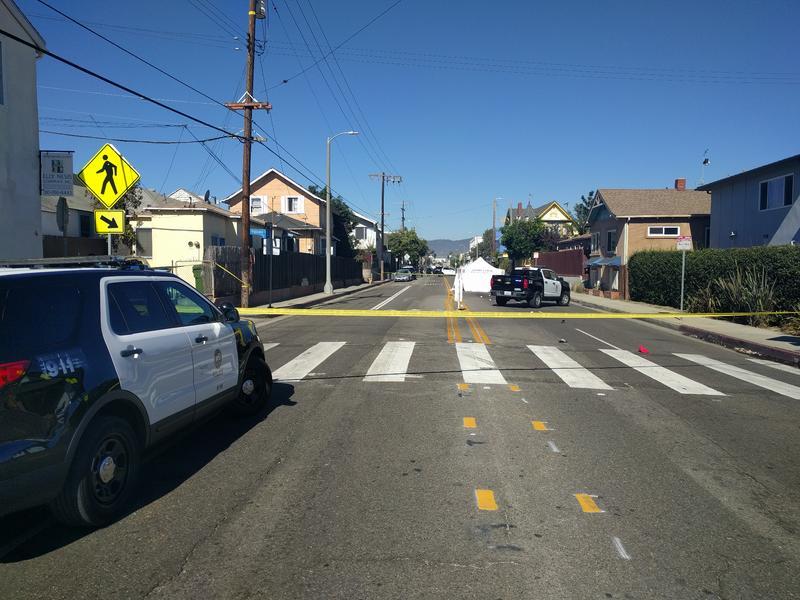 The City of Los Angeles has reached out to Yo! Venice with information about why there has been a delay upgrading the crosswalk on Pacific and Sunset Avenues in Venice. Yesterday a car hit and killed 40-year-old Damon Shear of Los Angeles at the crosswalk.
Tim Fremaux, Transportation Engineer for the City explained via email.
Flashing beacons for Pacific/Sunset are approved and federally funded by a Highway Safety Improvement Program grant, which includes 45 other crosswalk locations. The design of this location, as well as the other 45, is basically complete. This includes ADA access ramps, the flashing beacons themselves, push buttons, and other associated hardware. There is some “red tape” associated with the federal funding that is delaying implementation. It is mostly a series of procedural requirements set forth by the Feds in order for us to spend these dollars; it includes environmental clearance, getting formal authority to construct all 46 locations, and then going out to bid and having a contractor construct them. The federal funding for this project allows us to upgrade more crosswalks over time. We have about 700 similar crosswalks throughout the City, of which only a little over 100 have existing flashing beacons, like the location at Main/Sunset. We are performing some of these upgrades at locations that don’t have the federal funding, using in-house staff, and are doing so at a rate of about 1-2 crosswalks every weekend. All that being said, I know this offers little comfort to the situation at Sunset/Pacific and the tragic collision that occurred just yesterday. It is our objective to expedite implementation of flashing beacons at this location, and we are looking at creative solutions to do so, working closely with CD 11.
David Graham-Caso, Deputy Chief of Staff for Councilmember Mike Bonin’s office, shared the following statement.

On Wednesday morning, a motorist driving an automobile struck and killed Damon Shear – a pedestrian attempting to cross the street at Pacific and Sunset Avenues in Venice. It is a horrible, tragic death — one of hundreds that occur every year as a result of a sickening crisis of traffic fatalities plaguing Los Angeles.

By all accounts, Damon was crossing the street legally, with a reasonable expectation of safety. A motorist stopped his or her vehicle at the crosswalk, as is required by law. A second motorist, apparently impatient with the driver obeying the law, sped around and passed the stopped vehicle, hitting the victim at a high rate of speed. Despite initial reports, the victim did not “walk into traffic.” Apparently, a motorist broke the law and hit the victim. The case is being referred to the office of the Los Angeles County District Attorney.

The intersection has been the scene of serious collisions previously, and in recent years the City of Los Angeles has increased LAPD presence there to target unsafe driving behaviors around this intersection, and LADOT has installed “paddles” in the crosswalk to alert drivers to the presence of pedestrians crossing, and has updated markings approaching the crosswalk so they are more visible.

Additionally, to help pedestrians cross more safely, the City applied for and Caltrans awarded federal money to add flashing beacons and ADA-compliant access ramps at the intersection — but Caltrans has yet to actually give the money to LADOT. (The money is part of a master grant for several dozen intersections citywide, many with extensive federal requirements, including environmental clearances and additional levels of review, and Caltrans will not award the money until it has reviewed, approved and cleared all 36 projects.)

The red tape involved with federal and state grants is one of the many reasons Councilmember Bonin has fought so aggressively to fully fund the Los Angeles “Vision Zero” program — which seeks to eliminate fatalities and serious injuries due to traffic collisions by providing local, easily accessible funds that can be quickly spent on safety improvements such as crosswalks with flashing beacons, scramble crosswalks, pedestrian-activated signals, curb bulb-outs, median island safe harbors, Safe Routes to School, and much more. More than 250 people die of traffic collisions in Los Angeles every year — one of the highest fatality rates for a major urban area in the United States. Councilmember Bonin secured $27 million for Vision Zero in this year’s budget, and is pushing LADOT to use the funds to expedite approved projects and front-fund projects that have been awarded but not yet received outside funding.

A car hit and killed a pedestrian on a crosswalk on Pacific Avenue at Paloma Court in Venice. 40-year-old Damon Shear of Los Angeles, was pronounced dead at the scene.

Neighbor Alexander Poe told Yo! Venice the crosswalk is notoriously unsafe. “The driver was going fast enough that the pedestrian flew 30 feet. The body is still there. His flip-flops are still in the crosswalk,” said Poe.

Pacific Division Watch Commander Scotty Stevens told Yo! Venice one a car had stopped to let the man cross and “the car behind changed lanes to avoid the stopped car” hitting the man as he crossed the street. Stevens said the man was killed on impact and “the driver stayed at the scene.”

Venice neighbor Virginia Wedemeyer lives nearby and works from home. She told Yo! Venice earlier this year, “all day long all I hear is tires screeching.” Having witnessed many near-misses, Virginia said she believes drivers simply don’t realize the crosswalk is there.

After today’s tragedy, Wedemeyer said, “sometimes a car will be nice and stop to let me pull out and they’ll get frustrated at first if I don’t go. Because I never trust the people behind to not cut around them. Every single time someone does.”

The Los Angeles Department of Transport (LADOT) determined the crosswalk was dangerous in 2014. The report stated, “that marked crosswalks alone are insufficient for the combination of traffic volumes, number of traffic lanes, and speed of traffic on Pacific Avenue…”

Councilmember Mike Bonin’s office told Yo! Venice in May this year “we applied for and got funding through CalTrans to add signal-activated flashing beacons to the crosswalk” similar to those on the crosswalk near Westminster Elementary on Abbot Kinney Boulevard. However, Councilmember Bonin’s office could not confirm “what the timeline is for installation of the flashing beacons.”

Henry Hereford, who lived in a nearby apartment for several years, told Yo! Venice, “People never stop there. They get annoyed when people cross. Why? They even put up California law signs and I did notice more people were stopping, but they just assume people won’t cross.”

Poe confirmed, “yellow signs were recently installed to make it more visible. But there is no flashing yellow light to warn careless drivers like there is one block away on Main St and Paloma. The current signs are clearly insufficient, and now someone is dead. This person did not run out into the street; they were following every precaution waiting to make sure cars had stopped,” he said.

Poe said improvements need to happen as soon as possible. “The lack of a pedestrian crossing light there makes it extremely dangerous. I’m hoping we can put pressure on Mike Bonin to make this happen. It’s time for us to do something about this crosswalk,” he said.