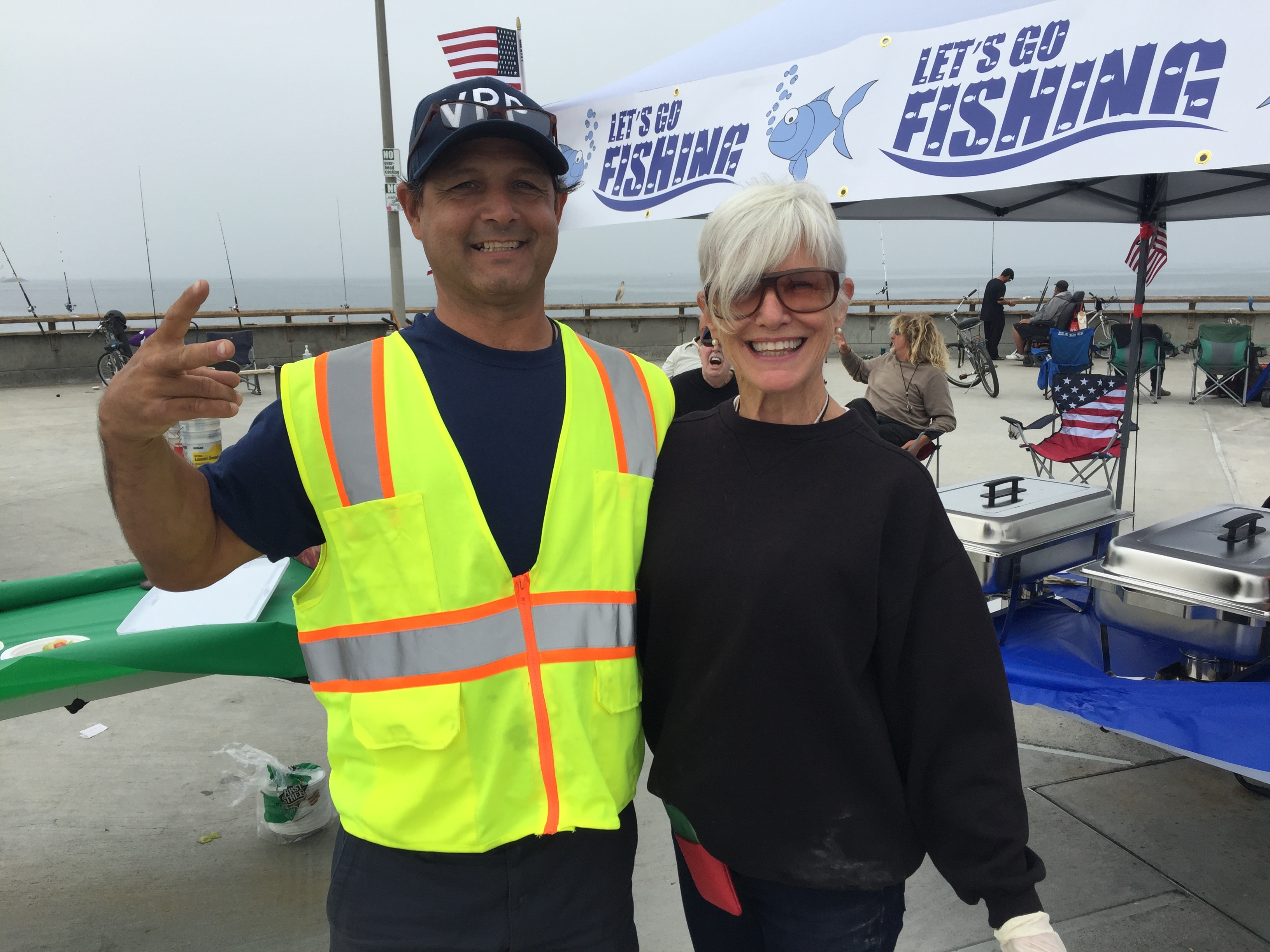 Noël Johnston and Peter Ruiz form an unlikely duo. The elegant, local Venice woman with a home on Ocean Front Walk and the quirky fellow who refers to the Venice Pier as a “she” and likes to pose for photos waving a gang sign.

They are the odd couple of Venice Beach. Their friendship forged through a mutual passion for keeping the Boardwalk clean. Johnston didn’t realize at the time, but when they met, Ruiz was homeless. Sleeping by the Pier at night and cleaning “her” each day at dawn.

“My neighbor and I were taking a walk one morning, and there was this guy painting a bollard at the pier.  He was wearing a safety vest, and my neighbor said ‘What a nice, neat job you are doing. It’s so nice to see the city taking an interest in the pier.’ And Peter said ‘Oh, I’m not a city employee, I’m a volunteer!’ Conversation ensued,” Johnston told Yo! Venice.

Taking care of the Pier is a form of therapy for Ruiz. He said it gives him a sense of purpose.

“I was deemed disabled, and I collect disability and it was my way of keeping busy, doing work. I’m not one to just sit around and collect a check. If I have the free time, I want to do something with it, being it clean the Pier or I volunteer with some other stuff along Ocean Front Walk. Graffiti cleaning and stuff,” Ruiz said to Yo! Venice, explaining why he had taken it upon himself to form the Venice Pier Project.

Johnston and Ruiz became friends in a round about way.

“I am on the Ocean Front Walk Committee and Melissa Diner, who was our chair at the time, had commented that none of us really knew any of the homeless along the Boardwalk and perhaps we should consider getting to know just one homeless person,” she said.

Having lived on the Boardwalk for almost 20 years, Johnston said she was embarrassed to admit she didn’t know any of her homeless neighbors, “I got this idea, naive I suppose, that perhaps I could help a couple of them. But this didn’t work out too well, for a variety of reasons.”

After she had met Ruiz, who “was trying really hard to help himself and having a hard time of it,” Johnston said she thought maybe she might help him with some of the details of his life that were problematic. “He has memory problems,” Johnston explained.  Now, over a year later, Ruiz is in a much better place. “I can’t take credit for most of this, but I do think that I have been able to help Peter help himself and that is gratifying,” she said.

Johnston helps Ruiz with everything from managing finances, “he’s admittedly terrible with money,” to staying focused, “no multi-tasking for Peter,” to remembering dates and obligations “from anything from Doctors appointments to paying bills,” she said.

Ruiz said Johnston is “a huge inspiration” reassuring him that his goals are attainable and that his past does not have to be a present burden. No better example being Johnston encouraging Ruiz to take another shot at organizing a community fishing day on the Pier. The first couple of times he had planned events, neither had pulled the crowds he’d anticipated.

“I made up flyers, and I put them on the poles, and I tried to coerce the public to come, and I didn’t do enough marketing, I guess or whatever, and it was only like three of us,” said Ruiz.

Determined, Ruiz spent the next year doing research to find out what he’d need to do to turn his Let’s Go Fishing event into a success. Part of his research involved attending Venice Neighborhood Council member, Matt Kline’s Wedding. “I got there at 4:30 in the morning, documented his whole event, kept notes on the layout. That’s when I started the research of the permits. I approached Recreation and Parks,” he explained.

The effort paid off. Not only did Recreation and Parks power wash the Pier specifically for Ruiz’s event this year but he was also able to provide free food for everyone fishing. “I wrote an email to Jimmy Dean asking if they would sponsor an event for breakfast and they kindly accepted.”

And, Johnston was there. Managing the microwaves. Heating up hash browns.

“As long as I can help with these things, I intend to.” Johnston said she supports Ruiz “in the way friends support friends, I suppose.  He encourages me too; it really isn’t a one-way street.”

Johnston realizes that while she has been able to help Ruiz off the street, the homeless crisis overall is too big and too complicated for one person to tackle. “There are so many degrees of homelessness, and the homeless individuals that I have met are just that, individuals. Most of them do not fit neatly into a social services program,” she said.

According to the results of the 2017 Greater Los Angeles Homeless Count released on Wednesday, May 31, homelessness in the city of Los Angeles jumped by 20 percent over the last year. The county saw a spike of 23 percent.

However, Johnston told Yo! Venice she believes “there are things that can be done on an individual basis.” Sharing examples of the local landlord who provides quality Section 8 housing and the Venice restauranteur who hires homeless, training them, and paying a fair wage. “I know these are small accomplishments, given the scope of the problem, but no one could convince me that they are not important accomplishments,” said Johnston.

While en mass the homeless crisis may be overwhelming, if Johnston and Ruiz’s unlikely friendship is anything to go by, their story is a hopeful example of how the power of one helping another can make all the difference.