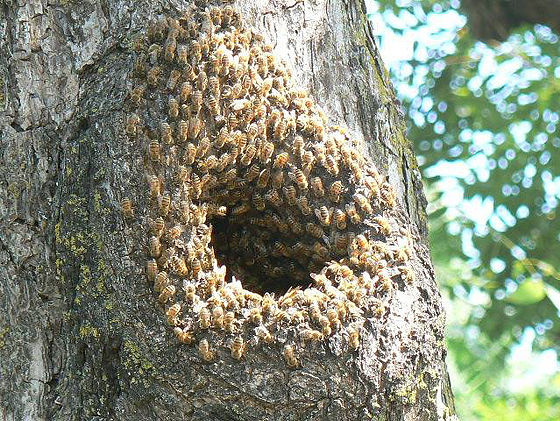 Word on the street that Snapchat destroyed a 20-year-old honeybee colony has enraged some Venice neighbors.

It all began with news from a local property owner who said he was riding his bike past a place he owns on Cabrillo Ave and saw “an exterminator putting signs and caution tape all around in front” of his property, “around this old tree with the bee hive.”

According to the man (who does not want to be named), the person who had come to remove the bees said he was “there to kill the bees” and that Snapchat had hired him.

“One of Snapchat’s security guys was standing next to him. I told them this was my property, the bees are not harming anyone and have been there for at least 20 years,” he said.

Security granted the bees a reprieve.

“Then a couple of days ago I rode by again to check, and I see the caution tape is back up and NO BEES. I inspected the tree (which is on public land in front of my house, not on my actual property) and saw that all the knot holes the bees would enter from were sealed up with cement. I went home, got tools and came back to break open the cement,” he said.

There has been much speculation as to whether or not the culprit was indeed Snapchat and if so, why they couldn’t simply let buzzing bees fly.

A Snap Inc spokesperson told Yo! Venice, “we hired a biologist and carefully relocated those bees. Being a good neighbor is always very important to us.”

While the Venice property owner reported seeing dead bees, this can happen, even when bees are humanely removed and relocated.

Sealing up the hive is done to prevent a new colony of bees moving in. According to www.adkinsbeeremoval.com, if “honeycomb from a hive is left in the walls, roof, or other structural void bees come back very frequently. Leaving a beehive and honey in the structure is asking for ongoing problems in the future.”

If anyone has an issue with bees, this non-profit seems to be the people to buzz: http://honeylove.org/rescuebees/