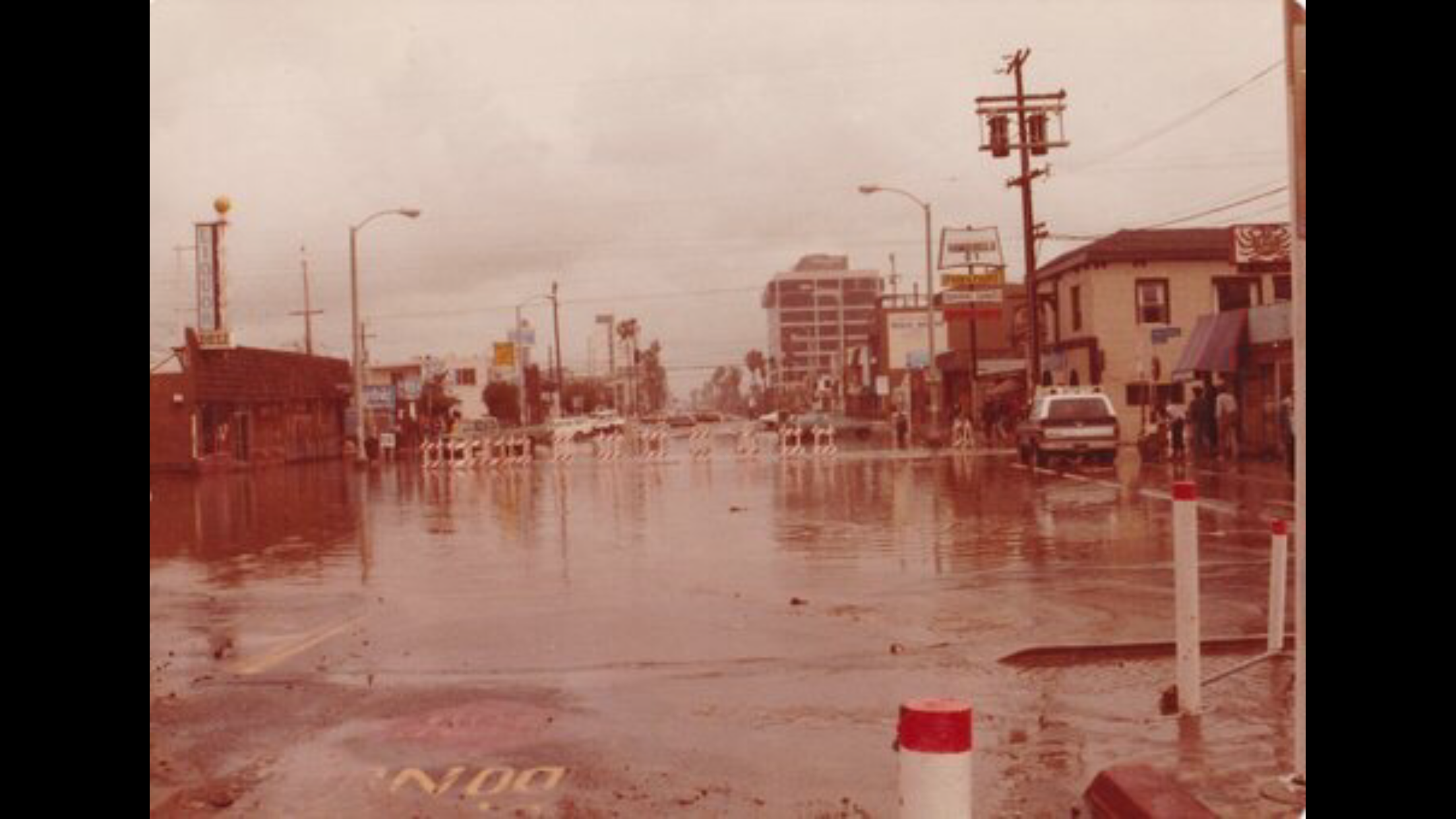 It is a windy day in Venice. People along the Boardwalk dodge falling palm fronds, moving like they are in a live action version of Space Invaders. By the Pier the berms stand, a solid pile of soggy sand, their surface bearing the scars of heavy rain.

All is not calm after the first series of El Niño storms have blown through, dumping buckets of rain, and removing our social-media bragging rights over east coast friends. So far this winter, we’ve shivered through colder days than New York City.

Fred Barthel says he’s on edge any time he sees a lot of rain in Venice. Barthel, 67, moved to Venice with his parents in 1951, when he was just 2 years old. During the El Niño winter that spanned the years 1982 to 1983 Barthel witnessed the destructive force of storms and rain that flooded Venice and destroyed the Pier. Resulting in the decision to erect the berms every year following.

The berms are now bulldozed into place at the start of winter by the LA County Department of Beaches and Harbors. The giant sand hills are to protect parking lots and other property from the potential damage of high tides and storm-charged waves.

Venice resident, Mike Targon, is one of a few who loses his ocean view when they go up, “I think putting up berms on the beach here to stop the tsunamis from coming to shore is a total waste of time and money, but I guess all they have to do is scoop up sand which is already there,” he says.

Other locals don’t mind the berms but they haven’t a clue why they’re here, “I have no idea, I don’t know what it’s here for exactly but we look forward to it so we can come and go sledding down the hill,” says Molly Simms, who lives nearby.

Barthel is happy when he hears the rumble of bulldozers that mark the beginning of winter in Venice Beach. He’s especially happy about the berms with this being another El Niño year, “I know it’s an inconvenience to have them but the kids like them to slide down them, and if it keeps the waves out then it’s doing a good thing,” he says from a cozy spot inside Cow’s End Cafe on Washington Blvd.

Describing the scene back in March 1983 Barthel says, “It happened overnight, it happened pretty fast. It was a storm surge coupled with a high tide. The water was all the way up to Pacific. It wasn’t deep but the waves were washing all the way up to the lights. Every place along here was all sandbagged in.” Barthel shows the photos he took of the flooded street.

The Federal Emergency Management Agency (FEMA) reports that in that winter of 1982-83, a series of El Niño-driven coastal storms caused widespread and significant damage to beaches, cliffs, and buildings along the coast between Baja California and Washington. The California Coastal Commission now uses the 1982-83 storms as its design event for new development.

Stepping out of Hinano a man introduces himself, “John Lennon, that’s for real,” he says pulling out his drivers’ license to prove his name. Born and raised in Venice, Lennon says he “sand bagged right here in Venice, watched the Pier go away. It was hard. There was a lot of people on the beach, may be about 100 or so people on the beach, just trying to save the streets up here. It came all the way up here to the bar.”

As Barthel and Lennon share memories of the 1983 flood they realize they have more in common than sand bagging, it turns out both men attended Venice High together, “people look pretty different when they get older, we didn’t recognize each other,” says Barthel.

Both men have been around Venice long enough to have experienced a storm surge at its worst and neither is keen to see it again, “we watched our Pier disintegrate, our original wood pier. All the pilings were in. Tore it all up. It was amazing. You don’t see that, may be once in a life time. We thought we might see it again this year. Give it time, it may happen again. Mother Nature you know,” says Lennon.

The disruption the 1980’s El Niño caused to regular weather patterns drew global attention. According to Australian Government website BluePlanet, the California coast experienced torrential rains and winds. High tides severely eroded the coastline, dislodging kelp beds, and Fishermen found marine species that did not belong along the coast, and could not find species that did. Overall, Los Angeles had triple the usual amount of rainfall.

“It was very weird. I was very scary because people didn’t expect water to come up that far. So when it did there was a lot of people panicking. Sandbags were in front of all the houses and all the condos, all the way down to the beach,” says Barthel. He remembers the beach restrooms suspended in air because all the sand under the building had been washed away from underneath, “I was like another world down here when it happened.”

Standing atop a berm, wind thrashing at his hair Barthel continues retelling his story, “I saw people desperately filling sand bags, I helped them, we were on the beach here with hundreds of people filling sand bags so they could keep the water out of their houses.” The berms are a good thing according to Barthel, “I like to see them because I think they’re keeping out the bad effects of the storms. Ever since they’ve been putting up the berms we haven’t had a problem so it’s nice to see them go up because I don’t want to see that problem again. It was scary. It caused a lot of property damage. I hope we don’t need the berms again but something really weird happened in 1983 and I don’t want to see that again. I’d like to warn people not to be too complacent,” he says looking out over the sea where waves churn and wind whips up egg white-like crests, and on the horizon, another storm is building. “We’ll just have to wait and hope that it doesn’t get too bad. We don’t want to see what happened in ’83 happen again,” says Barthel.