At approximately 6:18pm this evening, two Hispanic males were shot on the grass parkway near Windward and Ocean Front Walk (NOT at the Skatepark). A witness said 4-5 shots were fired. 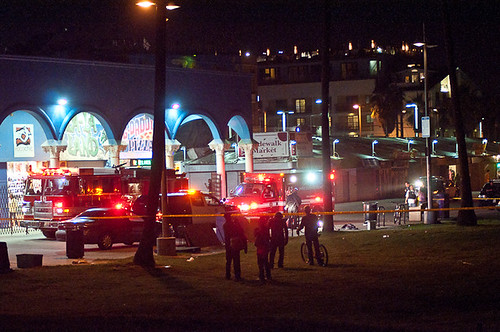 One of the victims, described as an “early 20’s shaved headed and heavily tattooed male wearing a tank top and jean shorts”, stumbled onto the vendors area on Ocean Front Walk before collapsing and getting assistance from the crowd that gathered. 911 told a witness to put cold compresses on the victim’s wound, which was on the left side of his abdomen. 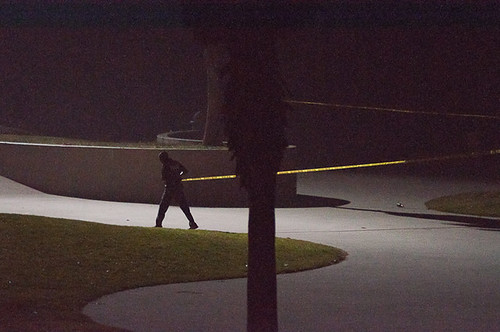 The other victim, who was wearing a yellow jacket, ran to Windward where another group helped him before the ambulance arrived. 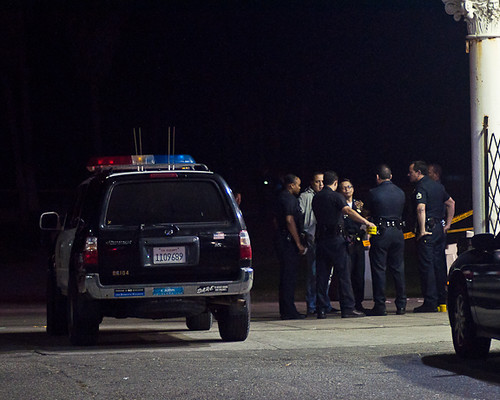 Witnesses said the shooter ran north. LAPD is on scene and investigating. Residents are advised to lock their doors and report any suspicious activity.

Update 7:30 pm: witnesses have described the shooter as a 40’s- 50’s tall heavy set African American male. The victim in the yellow jacket had just walked out of his Mother’s Ocean Front Walk store to smoke a cigarette when he was struck by a stray bullet. His mother did not realize her son had been hit as she was helping the other shooting victim.

Update 10:23 pm: An LAPD officer said they believed that four suspects ran from the scene. The investigation is ongoing and it does not appear that the suspects have been caught  as of 10:23pm.