Longtime local Donny Grownden has passed on after a strong fight against throat cancer and a liquid diet. He had a peaceful ending at the VA hospital in WLA. Donny was a proud veteran and a strong supporter of the USA. Donny loved Venice after moving here from Ohio. Though he was reticent about his past, we know he is survived by several children back East and a brother. 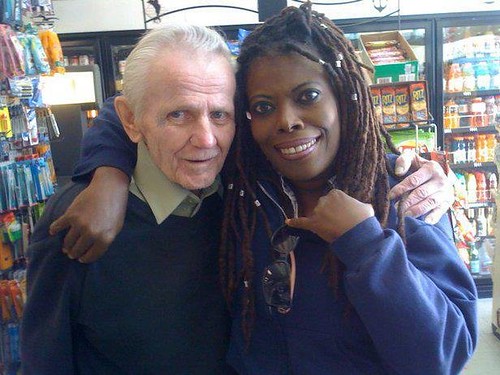 I first knew Donny when he tended bar at Hinano’s and gave advice, history lessons and help freely to anyone who asked or needed. He later worked at the bike shop next to Hinano’s – again helping anyone with or without money to pay. After retiring, he became a fixture at the Terrace Café, and all of Hamburger Square, holding court at Table 99. The owner of the Terrace, Vlad, gave his famous hospitality and kindness to Donny and made sure he was never hungry and always had a warm place to hang out. Almost every morning for five years, I had the pleasure of being part of Donny’s life, meeting his huge circle of friends and talking and arguing about all the news.

A few of his friends were Sharon the Parking Queen, Anjelica Huston, Henry Hill (an acquaintance) and many others. One of his best friends, Jeffrey, watched over him making sure he was okay, taking him places and being an ear whenever needed. Donny fulfilled that role for many of the homeless around the Washington Pier, but never condoned bad behavior and would cut anyone short who didn’t meet his high standards of behavior.

In his last couple years Donny moved into a nice apartment behind Hal’s and would wear out your ears telling you how great it was. Two local heroes, Jaime Doetsch and Pete Kasper took care of him near the end, being his hospice and making sure he ate, took his medicine and painkillers. They were with him at the end and smoothed his transition with love and kindness. They are now making the final arrangements.

Those of us who knew him have lost a great friend and Venice is lessened by his passing. A memorial is being planned. Contributions will be needed to make certain that Donny will be remembered with the dignity he embodied in life. Details to follow.

Rest in Peace Donny and thank you.