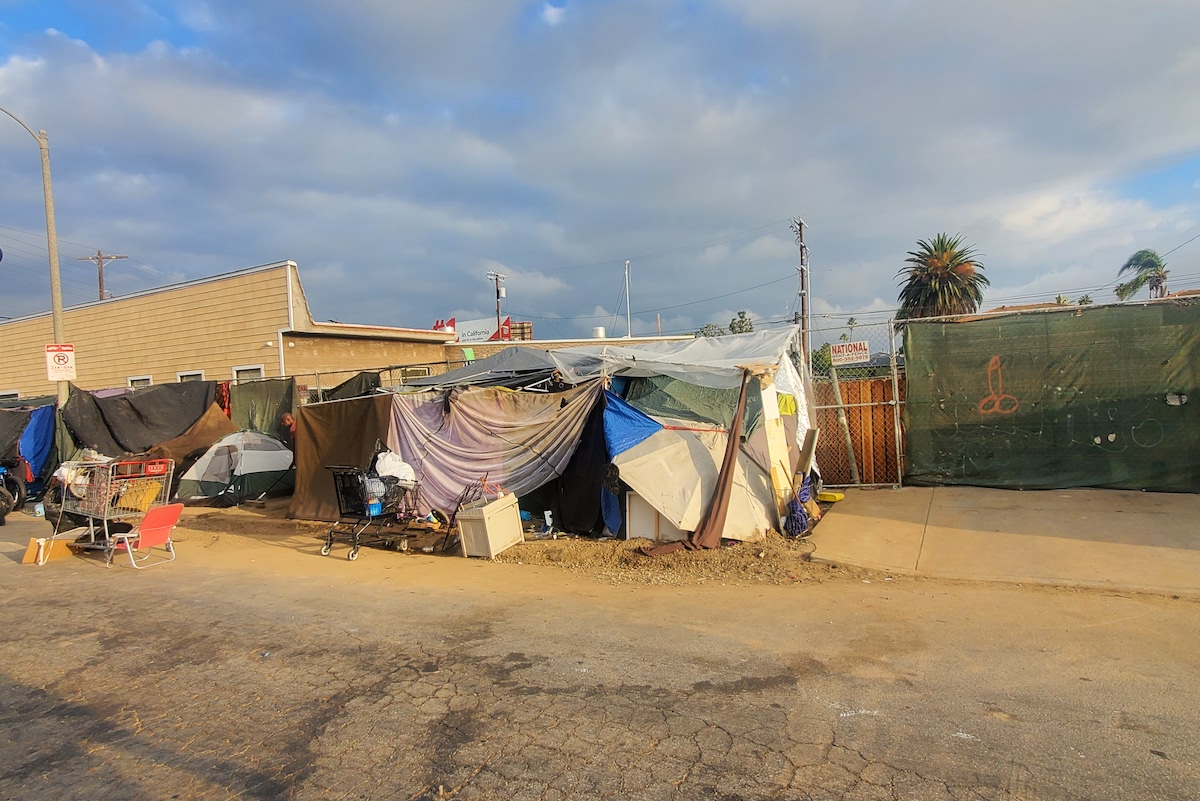 The Flower Street encampment, a collection of tents and structures on the south side of the street and sidewalk in Venice, weaves around the block to a gated building that was once a dry cleaners and furniture retailer. Now it is covered in filth and debris on the sidewalk on Lincoln making it impossible to walk. According to Flower Street homeowners and residents who wished to remain anonymous, the advent of the encampments occurred when two homes (748-752 Flower) were torn down behind the Lincoln Blvd structure which has since been gated, but the tents and structures remain along the street.

There are between 10-15 structures that in some cases seemingly connect, dozens of bikes and bicycle parts, shopping carriages from RALPH’S as well as the $99 CENTS store as well as an array of garbage about the area although today when I visited (10/23), the dwellers seemed to be cleaning up the street and removing unwanted items. On camper from Georgia stated she has been in Venice for two years, and that she felt safer on Flower than indoor housing where she claimed she was stabbed.

On Friday I had the opportunity to speak with a Flower Street property owner and tenants about this never ending human catastrophe and how they cope with it daily.

The three spoke on the condition of anonymity because they fear reprisal from campers and the gang element that seems to intertwine with those living in these third-world conditions.

“We have had homeless individuals jump over our property fence and steal packages. All kinds of outdoor items have been taken. There is screaming at all hours of the night. There is prostitution and gang activity. It is a dangerous and criminal environment and no one has helped us. Some have moved away and several properties are now for sale. Just last week an abandoned house used for parties was set on fire. There have been multiple home invasions. Drug deals are rampant. We need help and action,” said one very upset tenant.

CD-11 Councilman Mike Bonin, who’s decade term of office is ending at the end of the year has been uncooperative and has refused to meet with his own constituents to control and correct the out-of-control conditions these people deal with each and every day.

One property owner who vacated her own residence said numerous attempts to meet with Bonin were turned down or ignored. Bonin staff members come and go and a revolving door of representation changes all of the time. While they were found those who worked in the council office to be empathetic, no progress of any kind has taken place.

Calls to LAPD have been frustrating as it appears there hands are tied too, as it seems Mike Bonin and Mike Bonin alone is apparently preventing any progress from occurring, so this collection of weary residents look to the future when Bonin is gone.

With the selection of a new council member to replace the incumbent November 8th, two Venice attorneys; Erin Darling and Traci Park are competing to succeed him. The winner will have their hands full in correcting and clearing something that should have never been allowed to happen here in Venice, much less anywhere in America.

VNC Community Officer Clark Brown has made cleaning and clearing the encampment his personal mission.

As a member of that volunteer body that can recommend, but lacks the authority to take any formal action.

At the October ZOOM meeting of the Venice Neighborhood Council (www.venicenc.org), about a half-dozen Flower Street residents made their case to the full board that something needs to be done now.

President Jim Murez was empathetic to the plight of the Flower Street callers and said he would be corresponding with the appropriate parties to see what can be done. There was a sense of unanimity among board members that these people need help sooner than later.

One resident described a previous incident to me where a dead body was found on Flower.

“These past five years have been the most aggressive, and lately things seem to be getting worse.”

“The conditions are unacceptable and in many cases horrifying. I will do all I can to be helpful.”