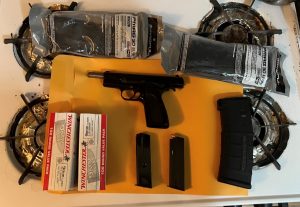 According to the LAPD, on September 6, 2022, a suspect entered a Bowelero bowling alley located at the 12100 block of Venice Boulevard.

“The security guards (victims) at the location were monitoring and attempting to defuse a dispute between the suspect and another party. The suspect then produced a handgun and pointed it in the victims’ direction, who were all standing in close proximity to each other. The suspect then fled the location,” the LAPD said in a press release.

On October 10, 2022, the GVRTF conducted a search warrant service at Jose Daniel Martinez’s residence, where a firearm, ammunition, several magazines, and clothing worn during the commission of the crime were booked as evidence.

Martinez was booked for his Ramey Warrant and assault with a deadly weapon.

By Yo Venice Staff October 11, 2022
in Crime, News
Related Posts