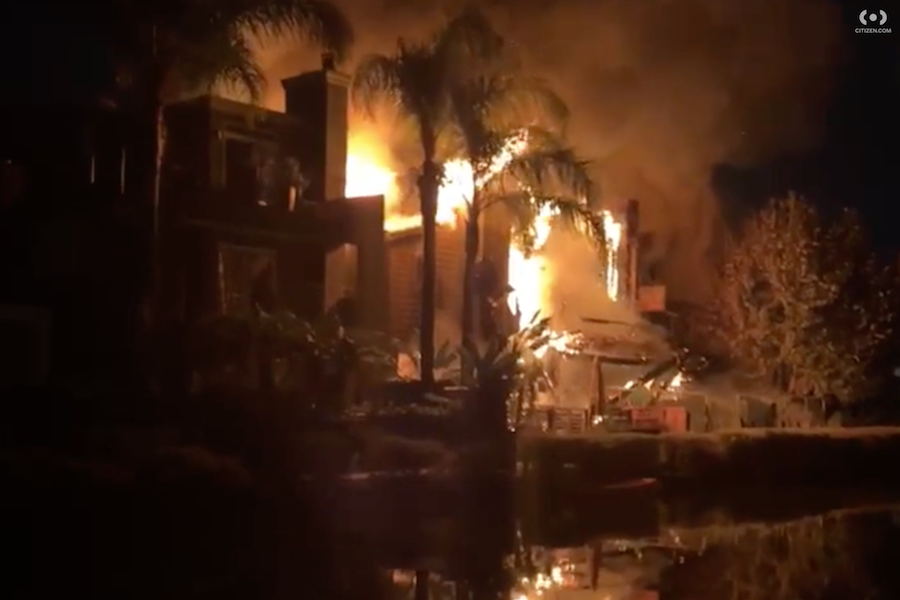 Cause of Sunday night fire remains under investigation by LAFD

Neighbors of a Venice Canal home that burned down over the weekend say the blaze was started by homeless individuals.

The incident was reported on Sunday around 11:50 p.m. at 421 Carroll Canal. Los Angeles Fire Department (LAFD) crews arrived on the scene to find a three-story home under construction “fully involved in fire with exposures on all sides.”

It took over 100 firefighters to put out the blaze in 80 minutes with no injuries reported. The fire, however, destroyed the three-story home of origin and damaged three nearby residences.

Glenn Searle lives across the alley from the house that burned down. He told CBS that over the weekend he saw several homeless individuals in the property the day before the fire.

“The activity is all night long – people going through our garbage, people living here, people do drugs here,” Searle told CBS. “I’m not sure what part the homeless had in here, but I can say that all day before there were homeless living in here and using the toilet all day.”

Martin Cassindorf, the owner of the burnt property, told Fox 11 that he is thinking of selling the property instead of rebuilding it. He and his wife had lived on the property for 24 years.

“It’s pretty horrifying and I’m still trying to process this,” Cassindorf told Fox. “Horrible flames that I’ll remember all my life, watching all my possessions, family albums and pictures and mementos of a lifetime going up in flames. Rather than rebuild, I’m actually thinking of tearing it down, selling the lot, and moving away from all these homeless people because it could happen again.”

By Yo Venice Staff October 7, 2022
in Crime, News
Related Posts