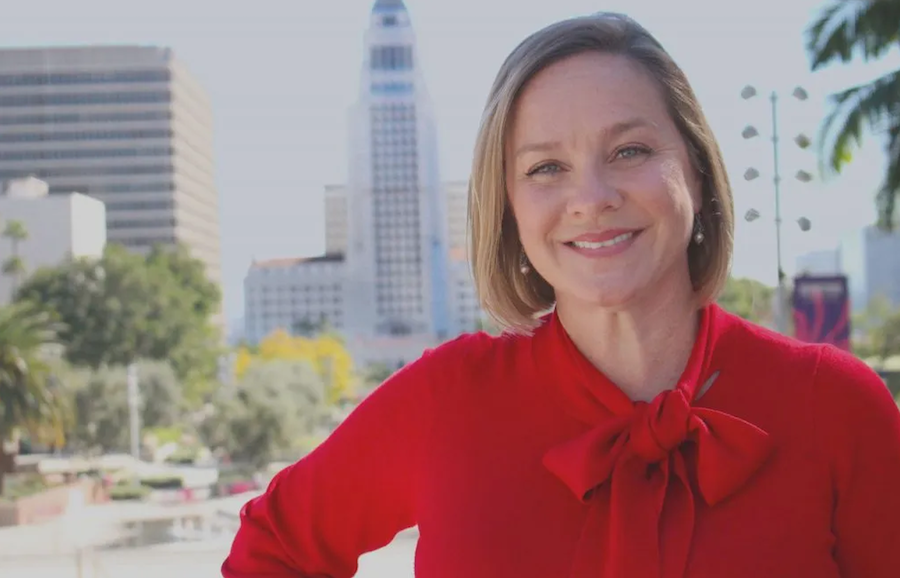 Q&A with Council runoff hopeful, Park talks frankly about homelessness in Venice, describing the issue as complex, no single solution, no magic wand!

The Homeless Committee of the Venice Neighborhood Council (www.venicenc.org) hosted a roundtable discussion on the issue of homelessness Tuesday evening via ZOOM with CD-11 council candidate Traci Park, an employment attorney and Venice resident.

The hour-long discussion chaired by Frank Murphy and moderated by Vicki Halliday allowed each member to ask questions in an honest give and take on the issue that has plagued the district and in particular Venice for years.

Park, who qualified for the runoff with her second-place finish in the June 7th Primary appeared comfortable, confident and composed as she spoke about her policy positions on homelessness in Venice and beyond. This is the second time the Homeless Committee hosted such a forum of sorts as they did so last winter with at the time all of the announced candidates with Venice local, Dr. Naomi Nightingale serving as moderator.

The Homeless Committee, which is one of the more active units of the VNC regularly invites service providers and other experts on the issue of homelessness and other specific topics such as the Centennial Park cleanup and bridge housing.

The Committee will have the other Venice attorney in the race, former VNC member Erin Darling at their August meeting.

While the meeting started a little late as a quorum was necessary to continue, most of the members eventually signed-on and had a serious, thoughtful take on an issue that in many ways has divided Venice on a host of philosophical, demographic and ideological lines.

Committee members Frank Murphy, Vicki Halliday, Jody Mortimer, Brian Ulf, Stan Muhammad, Pat Raphael and Liz Wright offered questions and insight to Park, who was professional, polite and interested in what they had to say and urged that should she be elected “public output will not be damned,” as she will seek “norms and rules” regarding crime and violence and the current state of “lawlessness and chaos” needs to end.

“The law needs to be equally applied,” offered Park, strongly endorsed by the public safety community during the primary including the endorsement of the LA Police Protective League.

Describing herself as a third-generation Angeleno, the Venice employment attorney told the committee the “ineffectiveness of local government” as it applied to the issue of homelessness was one of the primary reasons she jumped into the race to challenge incumbent Mike Bonin at the time. Bonin, under the threat of a second recall attempt eventually left the race last January and endorsed Park’s opponent, Erin Darling.

Committee member Pat Raphael, currently homeless asked the candidate what was her plan in place?

Park asked the committee’s membership to visit her website online at www.tracipark.com to review her plan and at this point presented an overall narrative of the homeless issue here in Venice as well as districtwide.

Describing the issue as “very complex,” with many challenges and layers, Park noted that getting the numerous service providers as well as the community “all rowing in the same direction” was critical for collective success and progress.

Park talked about preventing homelessness as a key concern, and that a “safety net” was necessary to ensure the financial assistance needed and suggested a 24-hour housing hotline manned by social service professionals so that further homelessness is avoided and stopped at the point of contact.

Protecting and preserving affordable housing was also critical while compiling “accurate data” to serve the population and not just relying on annual homeless counts as the primary source of information.

Park talked about “granular demographic assessments” and suggested models for individuals over 55 as well as those with children and victims of domestic violence.

Park believes mental health and addiction services were crucial moving forward and she noted service providers need to be “modeled and managed” to provide actual results and progress.

Park made it clear that the days of “writing blank checks and hope for the best” would be over should she succeed Bonin. While she agreed that investing in housing is important, a menu of housing alternatives are necessary as it will take decades to build what it will take to provide permanent housing.

Park described safe-camping, emergency and transitional housing in what she described as “safe-settings.”

In an obvious reference to her opponent Erin Darling, Park stated that there “is nothing progressive about being on the streets.”

Park discussed drafting objectives that result in outcomes, and no more “blank checks” and throwing “billions at the problem” has not worked.

“I believe in accountability,” offered Park.

Committee member Jody Mortimer was next as he spoke of a “10-year plan with benchmarks” and referred to the candidate as “head-strong.”

Park noted that there are currently 2,000 acute care beds and that she supported “step down” facilities as well as community-based care construction as well.

Park believed additional dollars could be lobbied from the federal government to expand what Medicare does not absorb in issues of homelessness and housing as well.

Brian Ulf, a longtime committee member who was once homeless himself turned his life around in recovery asked about the expiring lease for Venice Bridge Housing as well as the service provider, PATH.

Ulf suggested a “community benefit agreement” with service providers and Park was equally supportive of that kind of accountability and transparency moving forward.

In a reference to the current incumbent, Park stated Bonin “did a terrible disservice” to the neighborhood and stated “nobody trusts the city,” and it will be “difficult to get a buy-in” moving forward.

“I will keep the promises that were made.”

Park believes enforcement is at the center of the challenge and believes a “hearing process” should be considered. Park did not commit to terminating the relationship with PATH, the current provider and it appeared from the conversation the current location of bridge housing will be extended and continued no matter who wins come November.

Liz Wright, a longtime local fixture within the VNC and committee member questioned future costs and was concerned about advertising dollars generated by LA that most Venetians have opposed in the past as a new source of homeless funding.

Park pointed out that $1 billion dollars has already been dedicated to homelessness by city officials and she called for “performance metrics” to ensure the dollars are spent prudently and wise. She also mentioned that the state of California has a huge state surplus that could be tapped into as well as lobbying the federal government for additional resources.

Committee member Stan Muhammad opened with stating he was “looking forward to seeing you in office,” and was concerned about the status of the Vera Davis Center that has been closed for several years.

Park was appreciative of the kind words and promised to get the facility back-up and functional should she be successful.

Committee member Vicki Halliday was up next and asked questions that were submitted by the community as there was no interaction with those residents who joined the ZOOM presentation.

Halliday asked one question as to the what data was available regarding transiency and past criminal records of those on the streets currently and while Park was intrigued by the question, did not have that information at her finger tips and forecasted that segment of the homeless population could be substantial.

Park talked about early release from incarceration as contributing potentially to the homeless equation and suggested the data requires support for these individuals with a criminal background to get back on their feet and functional in society once again.

The issue of Reese-Davidson, more commonly referred to by many as the “Monster on the Median” as something she opposes because of cost and location and cited the project as a prime example of government waste run amok.

Park believes the “housing first” approach should be part of a greater series of models and approaches and a “one-size-fits-all” proposal is not the menu she prefers.

Park stated her opposition to those residing in housing who are not clean and sober, and believed recovery was at the foundation of progress regarding homelessness. She indicated who are not alcohol and drug addicted would be hesitant and opposed to sharing housing with such individuals.

Park also promised to end what she described as “the contentious relationship” with law enforcement and that they need to play the proper role in this homeless challenge.

“Public safety partners need to be able to their job,” in lieu of rising crime and murder rates and that the role of LAPD is to “enforce criminal laws.”

Park was critical of social service response times and promised to reform the process.

“I don’t want a brochure. I want a real time response.”

Chairman Frank Murphy summed up the discussion by asking the candidate what she took away from this roundtable.

Park admitted her “frustration level was high,” and that cross-collaboration and performance metrics were essential in reforming a process that at this moment seems inept and woefully dysfunctional.

Park stated there was a “level of frustration, and a sense of urgency” surrounding the homeless dilemma.

Park closed by stating there was a mandate for change, despite the complexities and complications of this social failure by those currently in office.

Park promised to offer the leadership to manage the problem.

Nick Antonicello is a longtime member of the Venice community and currently serves on the Outreach and Oceanfront Walk Committees of the Venice Neighborhood Council. The author is covering the race for council in CD-11 and has filed more stories than any other reporter to date. To contact Antonicello e-mail him at nantoni@mindspring.com