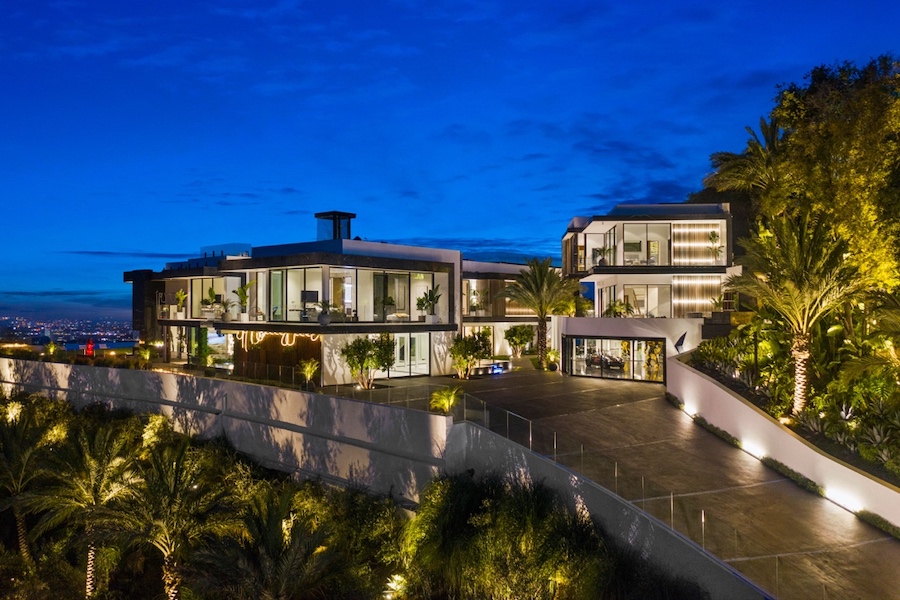 Palazzo di Vista is an “architectural masterpiece located atop of a rare promontory in Bel Air.” that will be going up for auction on April 21 through a worldwide online auction hosted by Concierge Auctions. This auction is not just for potential buyers because anyone who would like to observe the auction can register and watch as bids are made. Concierge Auctions is committed to making the auctions transparent to the public in the service of making sure that their contribution to sales in the Los Angeles real estate market is accurate and that they are able to find the true market value of the properties they sell.

The mansion is brand new and lists for $87.777 million with a $50 million reserve. The property offers some of the most scenic views of Los Angeles from the San Gabriel Mountains to the Channel Islands. The website describes Palazzo di Vista as an “ ultra-luxe mansion [that] boasts unparalleled amenities for futural living, including a first-of-its-kind multi-sensory NFT art gallery that features seven indoor large-screen media displays, and a rotatable 2-D laser projector designed for NFT artwork that casts light in a rhombic-shape up to 1,650 square feet over the pool with misters, emulating Disney’s California Adventure Park’s World of Color attraction.” Yes, this mansion has an NFT art gallery projected by a 2-D laser.

Palazzo di Vista’s more standard features include seven bedrooms, 11 bathrooms, and the mansion expands over 20,000 square feet. We spoke with two of the people involved in this one of a kind sale about the estate and some of its more “futural” features to find out more.

First, we spoke with Chad Roffers, President of Concierge Auctions about the auction and bidding process:

Dolores Quintana: Concierge is opening the bidding in the auction to sellers all over the world. Is that normal procedure for the company?

Chad Roffers: It is. We operate in 40 US states and 33 countries around the world. We have a very wide footprint and for properties of this nature, it’s not unusual for the buyer pool to be global.

Could you explain the bidding process?

Sure, it’s very straightforward and very transparent. The auction will take place over a five day period and it’s all digital. If you’re a registered bidder, you will be granted credentials that allow you to actually place bids, if you are an observer, you can also log in and watch the bidding, so it’s transparent to the entire marketplace. Normally, the bidding opens up and typically, for the most part, there will be some bidding in the early days or hours of the auction, but typically, most of the activity occurs in the final 30 minutes.

Because I am curious, why does that happen in the final 30 minutes?

That’s a great question. I think that it happens for a couple of reasons. One is that the buyers who are participating in buying properties are very sophisticated people, and I think they certainly want or are looking for the best deal possible, in my experience. Most of them think that the right strategy is to wait towards the end before they really put their best foot forward. I think that’s the nature of a typical buyer. I think that Ebay taught the world to watch the clock.

That is like typical eBay or online bidding behavior, to wait until the very last second to put in your real bid.

One thing that we do that’s unique is that we employ what’s called a soft gavel. What that means is if a bidder places a bid with three minutes or less of auction time remaining, then three minutes will get added to the count. That way everybody really has a fair chance. Somebody can’t just come in at the last second and then the others who’ve been competing all along miss out. So it’s still transparent and fast from the standpoint of being an easy transaction experience. But we feel like that soft gavel kind of levels the playing field for people to have a fair shot.

That’s actually a good thing. That does give people at least three minutes of time to try again when someone tries to swoop in.

Which is sufficient time. Maybe somebody has a slower internet connection, for example. Who knows? It just, once again, levels the playing field, and it’s still time efficient. It’s not unreasonable in our experience and it gives everybody a fair shot.

I really like that you do allow like people who aren’t actually part of the auction to observe because traditionally auctions have been kind of closed off to that type of scrutiny.

We agree. We really kind of pioneered that in our category of high end real estate and we think that it serves everybody better. I think that ultimately our job is to find out what the market value is for a property. We think that the more transparent we are then the more level the playing field is and then the more accurate the result will be.

The property sits on a prime location and has some amazing features. But what about this particular home makes it one of the finest properties in the world as you advertise on your website?

Sure, there’s a number of elements and we can talk about the house itself in a second. But one thing that is unique about this property? Certainly the views are really unprecedented. But the current owner went to pretty significant efforts to preserve the view in perpetuity and there are a few easements in place so that the view can’t be impacted in the future by somebody with a nearby property. [The easements] mean that someone else can’t build in a larger property impacting the view. I think that’s really important. I think the view is absolutely one of the top attributes.

Do you anticipate a high demand for this property? There’s a report out that names Los Angeles as the hottest property market in the United States.

I think that it’s interesting that you say that. We certainly are active all over the globe. But there’s really no other market like Los Angeles that has the depth and breadth of 50 billion plus properties and the velocity of that kind of property selling on an annual basis, in fact, I don’t think there’s any other market in the world that has that. I think that certainly Palm Beach, Florida, at the moment, has a lot of momentum. Aspen, Colorado has a lot of momentum, kind of in that rare air price point. But I think LA not only is that way at present, but has been that way for a long time.

I think that because of the pandemic that there’s really a desire to have your own home and own property and that you’re not necessarily limited to being close to your workplace or close to your business that is part of what really made the LA market explode. I don’t know if that’s something you’re finding that to be the case.

That’s super insightful and I agree with you. No question, interestingly the pre-pandemic market trends were more urban than suburban and smaller, more turnkey.  Now the trends have been more suburban. I say that Bel Air is certainly in an urban area, but it is more suburban really. That’s how trends are working, but also just space. Space and size becomes something that is sought after and I think it is because people are working from home, people had to spend more time at their home than they anticipated. I think that that’s really why bigger properties are more in demand.

I think you’re right. It’s not only space, but also the quality of life in the space that’s important to a lot of buyers now.

We also spoke with Aaron Kirman, one of the listing agents, of the Aaron Kirman Group at Compass Architectural Real Estate specifically about the NFT Art Gallery and the other luxury amenities that come with the home:

What is an NFT gallery?

The NFT art gallery and the 2D projector sound like something that would be a new type of amenity for a property. Is it the first of its kind?

It is a newer amenity that high net worth homeowners are looking to include in their residence. Whether it’s one or two televisions that continuously play NFTs or a full gallery, there’s an option for everyone.

What other amenities come with the home?

The home is listed as fully furnished. Additional amenities include a retractable DJ table in the center of the living room, a glass elevator, Koi pond, tequila bar, multiple fireplaces and fire pits and a rooftop deck, as well as a separate compound, BAM Luxury Home Automation System and fiber optics in the infinity edge pool that look like the night sky.