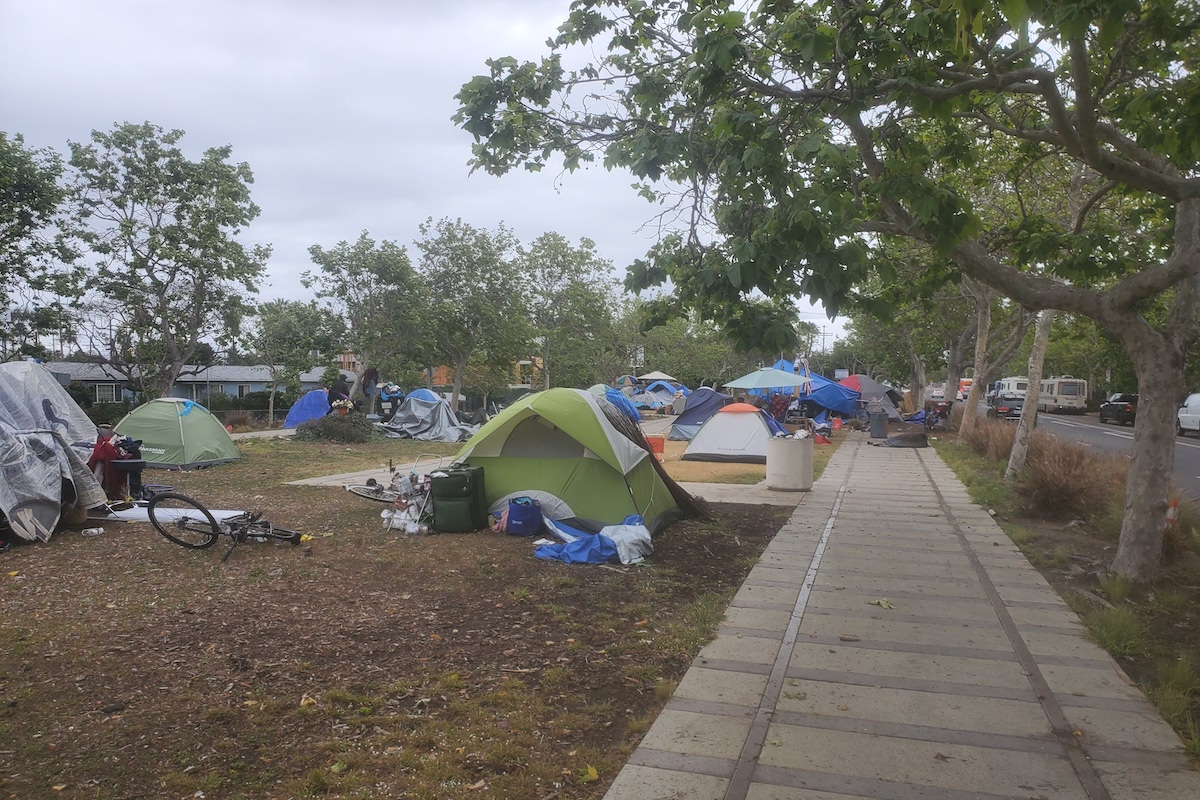 I live three blocks from the Venice Public Library and this is now the third story about the inaction and complete disgrace that is taking place at Centennial Park.

If you don’t know where that is, it’s the median park that has been turned into a slum of tents now in the hundreds and stationary RV’s that populate both sides of South Venice Boulevard.

You now have a virtual ghetto embedded in the middle of a residential neighborhood with open drug use subsidized by stolen bikes and other crimes being committed to keep the campers in drugs and alcohol and no one is doing a damn thing about it!

Many encampments controlled by gang members, drug pushers and a criminal element that is doing as they please!

Where is the City of Los Angeles, CD-11, LAPD, LAHSA, the VNC or anyone else for that matter?

Why is the cottage industry of homelessness getting away with such an abuse of a park designed for normal behavior?

Yeah, now we have political candidates using the site as a “photo opportunity” to create the illusion they have a plan or a care in the world for the residents forced to endure the current consequences of being held hostage in your own neighborhood because those in charge care more about the criminally homeless and transient population that are free from any rules or guidelines of this illegal use of public space and parcels.

Sidewalks are now littered with stolen bikes, tents and other illegal activity spilling over from this median village, there are literally hundreds hanging out and destroying a public space with no apparent end in sight!

Now I’m told that staffers at the library are being threatened by the campers and that a library employee was robbed causing the facility to temporarily shut down.

There is no question that the tent population is growing, and becoming all the more dangerous to those of us who actually live here and just want to peacefully use the facility as a public resource and a place to congregate without a threat of violence.

For the growing perception on Social Media postings like Next Door for example  is that it is now too dangerous to visit this facility as the swell and increase of homeless is frightening parents and seniors from visiting.

As the increase in tents mounts literally by the day, the public at-large is being intimidated and threatened as one shooting has already taken place to say nothing of the abusive behavior of these transients allowed to start open fires that are a public safety threat as well as new tents now butting up to the library itself which is exactly what took place at the boardwalk that saw a building burn to the ground!

For the threat to the students and children who use this place of learning to do school projects, homework and alike, is it logical to enable a transient population to disrupt basic city services and why hasn’t the Pacific Division of the LAPD place a permanent officer or team of officers to monitor this new nest of criminal activity?

For the circumstances at Centennial Park are dire and dangerous, and are getting worse by the day.

The bottom-line is that this location should be immune from such encampments like any other “sensitive space” such as a school or park where children congregate.

For the health and safety violations alone should be enough to have this encampment swept, removed and closed immediately.

These savage and third-world conditions can no longer be enabled or explained away, but rather eliminated under current laws and ordinances already on the books.

LAPD must step up and take action, if unilaterally so be it because the cottage industry of homelessness, there political allies and not-for-profit bureaucrats truly hate the Venice resident and cheer for the criminal transient that is destroying the very fabric of our community each and every day this is allowed and somehow explained away!

The author is a member of the Outreach and Oceanfront Walk Committees of the Venice Neighborhood Council and speaks outs on issues important to Venice. He can be reached at (310) 621-3775 or via e-mail at nantoni@mindspring.com.