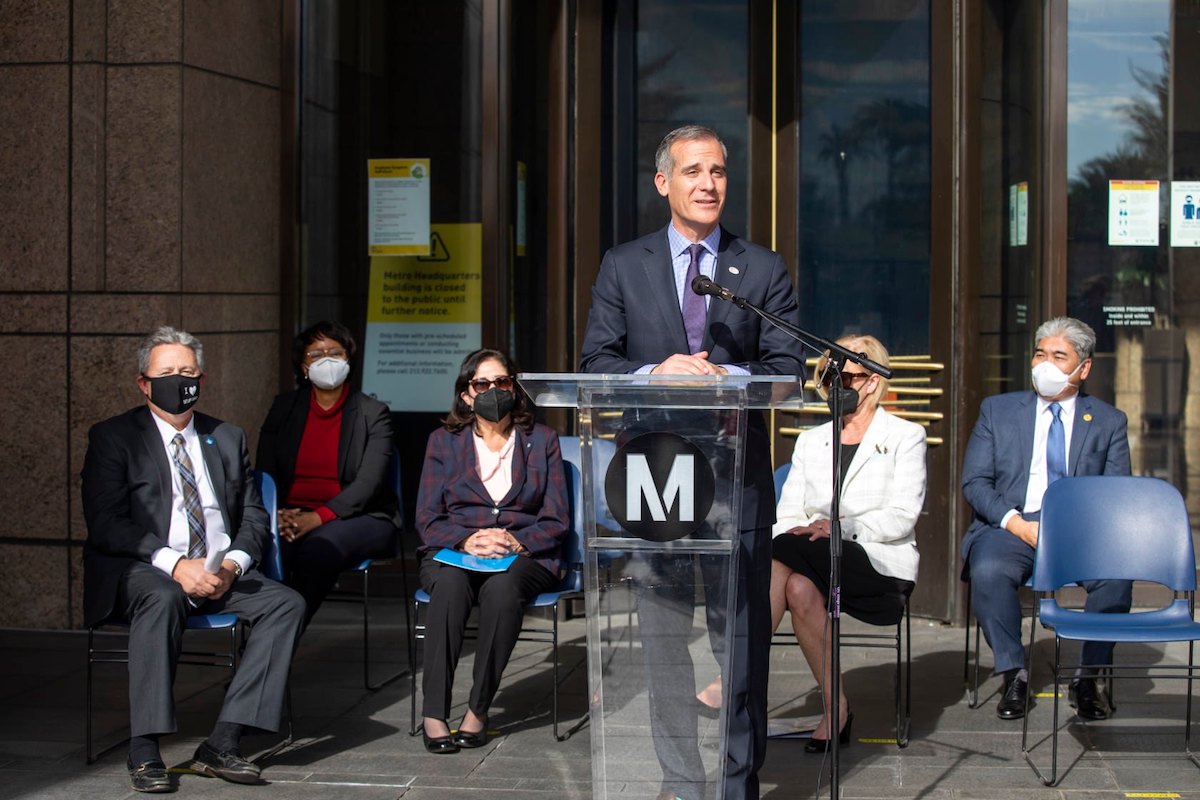 Sen. Chuck Grassley (R-Iowa) is trying to delay the confirmation vote for Mayor Eric Garcetti’s nomination to the post of ambassador to India as reported by Politico. His office has been investigating allegations that Garcetti knowingly lied to the congressional panel when asked if he was aware of charges against one of his most trusted advisors, Rick Jacobs. Jacobs has been accused of sexual harrassment, inappropriate behavior and assault against women and men while he advised Garcetti and worked at City Hall in Los Angeles. Investigators in Grassley’s office have spoken to whistleblowers in the case and according to a document that Politico reporters obtained, they have asked Senate Minority Leader, Mitch McConnell (R-Ky) to attempt to put a halt on Garcetti’s nomination until they are finished with their investigation.

Politico quotes Grassley’s statement to Sen. McConnell in the document says, “The United States owes it to the Republic of India to send them a qualified Ambassador that will represent the values of the United States. Mayor Garcetti may very well be fully qualified, but at this time, the Senate needs to look into these allegations further.”

The Senate Judiciary Committee does not have any authority over Garcetti’s nomination but other Senators on the committee did not object to Grassley’s attempts to investigate since his office does have staff who assigned oversight and investigations regularly.

One of Grassley’s aides spoke to Politico and said, “We were connected with one whistleblower, and since our initial conversations, we’ve been able to learn more from additional sources which seem to corroborate that the mayor was aware of this activity.”

The Foreign Relations Committee has already approved Garcetti’s nomination and the only vote left for his nomination to clear is a vote before the full Senate. Democrats would be able to approve the nomination on their own, provided that all 50 Democrats were present and Vice President Kamala Harris was there to break a tie vote, but Grassley’s attempt to delay a vote could cost the Democrats in Senate floor time.

Grassley’s letter to McConnell, as quoted by Politico, alleges that he has spoken to witnesses who “have not previously spoken to the Foreign Relations Committee, and are presenting new allegations that must be fully investigated.” Grassley added that he was aware that there was a previous investigation into the allegations, but he has doubts about how thorough the investigation actually was.

Mayor Garcetti’s office said only that they were looking into the matter and refused to comment any further. The White House issued a statement in support of Garcetti and his nomination on March 10 that was similar to other statements about Garcetti and these allegations.

The White House statement said, as quoted by Politico, “Mayor Garcetti has been clear that he takes any allegations of harassment very seriously and has made clear this type of misconduct is unacceptable in his office in any form. He has also said that he never witnessed this behavior nor was told about it prior to the litigation. The president has confidence in Mayor Garcetti and believes he’ll be an excellent representative in India.”

Garcetti has termed out of office as mayor and has been a strong supporter of President Biden’s candidacy early on in the presidential race of 2020. Garcetti was campaign co-chair for Biden’s run and helped raise money and choose the vice presidential candidate. Garcetti has gone on the record more than once denying any knowledge of Jacobs acting in an inappropriate or abusive manner or any allegations of it including when he was asked about it during his hearing in front of the Senate Foreign Relations Committee. In that hearing in December, Garcetti was only asked one question about the allegations by Sen. Jeanne Shaheen (D-N.H.).

Garcetti said, during the hearing as quoted by Politico, “I want to say unequivocally that I never witnessed, nor was it brought to my attention, the behavior that’s been alleged. And I also want to assure you if it had been, I would have immediately taken action to stop that.”

These allegations aren’t just coming from Republicans. Former aides to Garcetti have also tried to get members of both parties in the Senate to review evidence that Garcetti did know about Jacobs behavior and is not telling the truth. One of those former staff members is Naomi Seligman, one of Garcetti’s top spokespeople and one of Jacobs’s accusers. Seligman got the  non-profit organization Whistleblower Aid to help her file a perjury complaint against her former boss and has asked President Biden to revoke Garcetti’s nomination.

Politico spoke with Seligman who said that Garcetti “enabled this repeated pattern of sexual harassment of abuse…he also fostered a culture of denial, intimidation and silence and then he retaliated against those who spoke out and worked with his staff to cover everything up. Often, enablers get a pass. Powerful enablers are the reason that so many are victimized, and that’s why I’m doing this. I appreciate the seriousness with which Senator Grassley has approached this important issue.”

When Biden’s spokesperson Jen Psaki was asked about Seligman’s allegations against Garcetti last month, Psaki said, as quoted by Politico, that the president had no plans to rescind any of his nominations and referred reporters to speak with Mayor Garcetti’s office if they had further questions.

Garcetti’s hearing in front of the Senate Foreign Relations Committee took place at the same time as two other nominees to ambassadorships in Germany and Pakistan in December and the Committee sent all of the nominations forward for a Senate vote. While the other two nominees have been seen and confirmed by a full Senate vote in February and March of this year, Garcetti’s nomination has not advanced to a Senate hearing and final vote.

The allegations and the insistence of further investigation on Garcetti could make things difficult for Biden and his agenda. Relations with India are not as friendly as they have been in the past due to India’s refusal to condemn Russia’s invasion of Ukraine and abstention from the United Nations resolutions to demand that Putin stop his attack on the country. This issue could also affect Biden’s agenda in the United States since Biden recently signed a bill that would end forced arbitration between workers who were victimized in the workplace and their employers who seek to avoid bad publicity and censure. The President said at the signing of the bill that the bill represented “a momentous day for justice and fairness in the workplace.”

The allegations have put a shadow on Garcetti’s burgeoning political career since an LAPD officer filed a lawsuit in 2020 that claimed that Jacobs abused the officer and that Garcetti was a witness to the abuse and did nothing.

The LAPD officer who filed the lawsuit and was part of Garcetti’s security detail, Matthew Garza, alleges that he endured years of inappropriate touching and crude sexual comments for years and that Garcetti laughed at the comments.

There have been other accusers who have made allegations as well about Jacobs and his alleged ubiquitous abuse and sexual harrassment that included a photograph with Jacobs making a sexually suggestive gesture over another man’s genital area in which Garcetti appears and is giving a thumbs up gesture himself.

Former social secretary to the Obama White House and leader of Garcetti’s Mayor’s Fund non-profit organization, Jeremy Bernard, stepped forward to further confirm the doubts about Garcetti’s knowledge of Jacobs behavior and his denials. In 2017, Bernard testified that Garcetti had expressed relief and paraphrased the statement Garcetti made as “I can’t believe Rick worked out at City Hall and that we got through it without a lawsuit.” and further alleged that he was not the only witness to that statement. Bernard did admit that he never personally witnessed Jacobs, who he acknowledged had been a close friend, commit any abuse or act inappropriately at official functions.

Another former Garcetti staffer, Suzi Emmerling, was deposed for the Garza lawsuit as quoted by Politico, that Garcetti’s Chief of Staff during her employment, Ana Guerrero, told her that Garcetti knew “how bad Rick is.” Emmerling admitted that others had reported to her that Jacobs had witnessed Jacobs engaging in inappropriate behavior or that they had been harassed themselves by Jacobs. She also stated that a “prominent journalist” who she declined to name had told her that the journalist had seen Jacobs “doing all of these things right in front of the mayor” and that the journalist “had never seen a staffer behave that way in front of a principal.” Emmerling confirmed to Politico that she has spoken with members of Grassley’s staff who are investigating the charges.