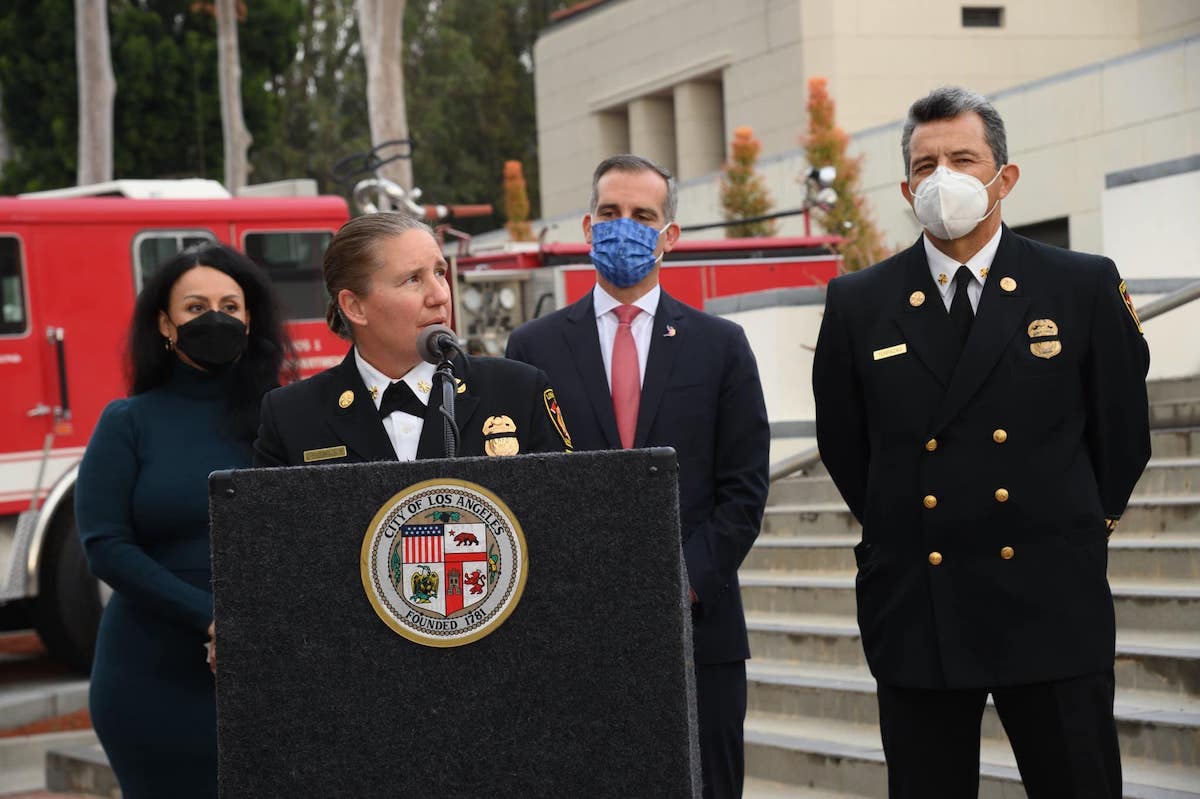 Crowley also to be first openly LGBTQ person to be chief

Crowley became the first woman to serve as an LAFD Fire Marshall in 2016.

“I’m truly honored to be considered the nominee for the next fire chief of the Los Angeles city fire department and I am humbled and proud to have earned the opportunity to represent each and every one of our 3,779-strong civilian and sworn personnel of our department,” Crowley said before the City Council prior to the confirmation vote

Deputy Chief Crowley joined the LAFD in 1998 after taking the firefighter’s exam. Her scores ranked among the top fifty out of the applicant pool of 16,000 candidates according to the LAFD. She has served for 22 years and held the ranks of firefighter, firefighter paramedic, engineer, fire inspector, captain I, captain II, battalion chief, assistant chief, fire marshal and deputy chief.

LA City Council Nury Martinez said, as quoted by ABC Eyewitness 7, “I think it’s so fitting for this nomination to come to council today, on the first day of Women’s History Month. Our city’s fire department has gone 136 years without a woman in its highest office and today we’re going to finally be able to turn the page.”

Martinez also said that Crowley “made a name for herself in the department as a strong leader, a hard worker and someone who does not shy away from a challenge.”

This isn’t the first time that Crowley has changed LAFD history. She broke through the glass ceiling when she assumed the role of Deputy Chief in 2016. She was part of developing the LAFD plan to promote acceptance of change to the department and a new culture among firefighters. Crowley has vowed to continue this effort and facilitate equity and inclusion for all within the department.

Mayor Eric Garcetti said, “Throughout her distinguished career, Kristin Crowley has proven her brilliance, determination and bravery on the job again and again. She’s also shown this city her heart, with her tireless commitment to helping students access life-changing educational opportunities. There is no one better equipped to lead the LAFD at this moment than Kristin. She’s ready to make history, and I’m proud to nominate her as the department’s next chief.”

Monica Rodriguez, Councilmember and Chair of the Public Safety Committee said, Deputy Chief Crowley is “well informed on every aspect of the job. It’s what earned her the respect of her peers, and it is what has continued to embolden her succession [sic] in the department to achieving this most prestigious and highest rank.”

Retiring Chief Ralph Terrazas said, “It was a privilege to serve as the fire chief of this world-class department. For nearly eight years, we made considerable strides in technology, implemented innovative ways to respond to emergencies, and became a model for other agencies.” Terrazas praised Crowley by saying, Crowley “is an exemplary leader and has a broad base of experience that will serve the department well … Chief Crowley has been successful at every position and I expect her success to continue as the next fire chief.”

Crowley is taking over a troubled department that has had a number of allegations of abuse against women within the department, racism, retaliation and sexism made against it in the recent past. Crowley noted that one of her first priorities when she takes over as chief is to address the problems in the LAFD work environment.

She said to the City Council members, “As the next fire chief, my priorities will be to ensure the LAFD stands ready and remains operationally efficient to serve our communities and this great city; that we enhance and support our firefighters’ safety, health and overall well-being; and that we promote and demand a work environment that is free of harassment, discrimination and hazing.”

“Our efforts will be maximized by making sure diversity is celebrated and valued, and that equity and inclusion are intertwined into every policy, procedure and practice.”

By Yo Venice Staff March 9, 2022
in News
Related Posts