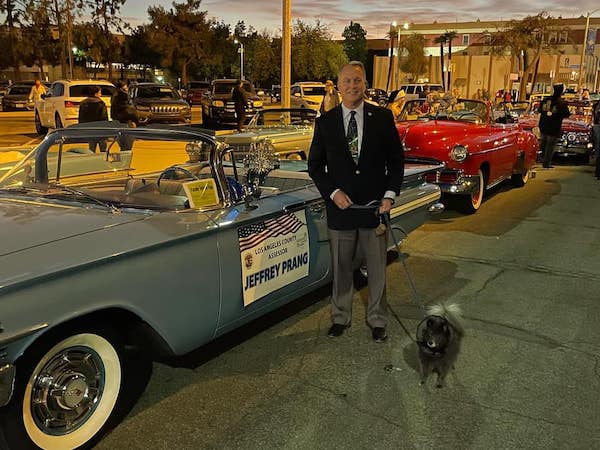 For too many voters, the position of LA County Assessor is obscure and confusing as to what just are the responsibilities of this constitutionally mandated, elected position.

So we decided to call the incumbent and ask him some questions as to what exactly are the duties, policies and misconceptions of his office.

Jeff Prang manages the largest assessor’s office in the United States having been elected in 2014 and re-elected in 2018.

Born in Detroit and raised in Warren, Michigan, Jeff Prang is a graduate of Michigan State University with a BA in International Relations and was a member of the Spartan Marching Band.

Prang is also a graduate of the prestigious Kennedy School of Government at Harvard University.

A former senior advisor to the Los Angeles County Sheriff where he served as a liaison to the county’s 88 municipalities, Prang previously served as a council member and mayor of West Hollywood over eighteen years.

A licensed appraiser himself, the Assessor’s Office of Los Angeles County under his leadership generates nearly $17 billion dollars as part of one of the largest tax revenue systems in the United States.

Prang also serves on the Board of Directors of PATH (People Assisting the Homeless.)

A former realtor with RE/MAX Realty of Warren, Michigan, Prang served at the municipal level as Assistant City Manager for the City of Pico Rivera, a Deputy to the state’s Board of Equalization and former staffer to former California Treasurer John Chiang, former LA Council member Ruth Galanter and former County Assessor Kenneth P. Hahn.

Jeff is a resident of Baldwin Hills with his husband Ray Vizcarra, who is employed as the music director at Redondo Union H.S.

We asked Assessor Prang some questions about the role and responsibility of his position and how those responsibilities impact neighborhoods like Venice Beach:

How are properties valued?

The appraisal of property begins using industry standard methods: the market, cost, and income approaches. The appraisal may be adjusted based on a number of considerations, including partial ownership, exclusions, exemptions, Prop. 13 limitations, etc.

Are there separate values for the land and improvements?

How and when do values change?

Under Prop. 13, a property may be reassessed when it changes ownership or when there is new construction. We do not reassess property unless one of these very specific things occur.

A change in ownership is typically sale, but can also include adding or removing a name from a deed. As a rule of thumb, new construction to an existing property might be adding a guest house or a second floor.

There are other circumstances that could result in reassessments, including when there is a decline-in-value which is granted on a temporary basis.

What is the methodology for residential v commercial properties?

There is both an informal and a formal process. The informal is a contact the appraiser or file for a Decline-in-Value reassessment that will then be reviewed as described above. The formal process involves a public hearing before a Hearing Officer or the Assessment Appeals Board, an independent agency that resolves disputes between the Assessor and property owners.

What is the biggest misconception the public has about property assessments?

The biggest misconception involves what the Assessor does, and just as importantly, what I do not do. The one thing that the public thinks I do, that I actually don’t do, is that I do not collect taxes. There’s another guy who does that and he has a very intuitive title – he’s called the Tax Collector. People often call me the “Tax Assessor,” but there is no such thing; that is a conflation of two separate offices – the “Assessor” and the “Treasurer and Tax Collector.”

Another misconception is that property taxes “increase” year over year. However, under the California Constitution (Prop. 13), assessments cannot increase from year-to-year by more than two-percent. Generally speaking, if you did not change the ownership of the property or engage in new construction, an increased on your property tax bill is probably not an increased in your “property taxes,” but rather, on a direct assessment or on voter approved indebtedness, such as school, transportation, storm water, sewage, parks or fire districts; which are not technically property taxes.

The author is a longtime Venetian and is covering the various positions that will appear on the ballot in 2022. A member of the Outreach and Oceanfront Committee’s of the Venice Neighborhood Council, Mr. Antonicello can be reached at (310) 621-3775 or via email at nantoni@mindspring.com.