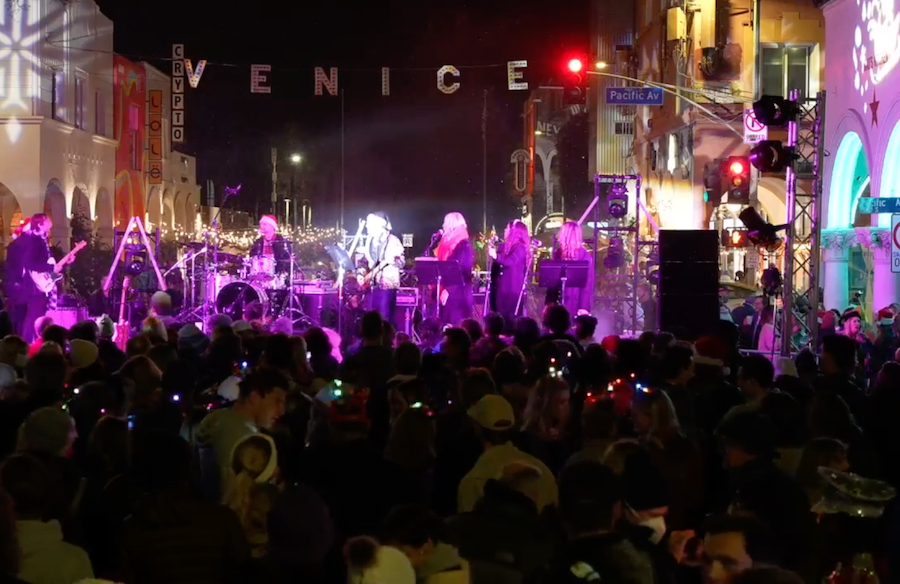 The Venice Holiday sign-lighting is probably the most popular community event outside the Abbot-Kinney festival which was shelved due to COVID-19, and Venetians turned out in big numbers Saturday evening to hear live music while numerous organizations had tables giving away all kinds of information and items.

Even Santa himself was on hand for a photo with kids of all ages.

It was a festive night for Venice, as so many people who had not seen each other at a public event in some time gathered and mingled.

Conspicuous by his absence was Councilman Mike Bonin, a prominent and featured fixture at past sign lightings, rumor has it he was out of town.

For a guy seeking reelection while fighting off a potential recall, his absence was obvious and noticeable.

But then again, Venice has been “ground zero” for the Bonin recall campaign and one might think what was once friendly territory is no longer the case for the controversial incumbent.

Jim Murez, the longtime manager of the Venice Farmer’s Market who also serves as President of the Venice Neighborhood Council, a position he won last June in a tightly-contested four-way race is now a challenger to Mike Bonin and is hosting a fundraiser at his Main Street home later this month.

That makes two announced candidates from Venice along with Allison Holdorf-Polhill, an unsuccessful candidate for the LAUSD school board and current staffer to school trustee Nick Melvoin who defeated her in the race to succeed former board member Steve Zimmer.

Polhill, a resident of the Palisades jumped into the race several weeks ago and made it a point to say she endorsed the recall campaign upon the news the recall organizers announced gathering nearly 40,000 signatures.

Polhill was seen Saturday evening working the crowd as well and sent a mailer promoting herself and her commitment to beating Bonin this week.

And if that wasn’t enough, some believe Venice attorney Mike Newhouse, who previously served as VNC president twice is mulling a potential run against Bonin.

Newhouse served as the evening’s master of ceremonies as he has in the past for so many years.

A popular local, Mike is married with two sons and some noticed the fact he shaved off his “mountain man” beard and mustache adding further speculation that a candidacy might be forthcoming.

And then there was restauranteur and entrepreneur Demetrios Mavromichalis with his wife strolling among the crowd where he has many friends in the Venice area as a lifelong LA area resident.

The longtime Mar Vista community leader that heads up two not-for-profit’s in NOURISH LA and ENVISION LA, he enjoys strong support in other parts of the 11th CD like Playa del Rey, Del Rey and Westchester while having friends in the Palisades in a contest that is quickly developing into a crowded field of aspirants who view Mike Bonin as politically speaking, a mortally wounded incumbent on the way out.

Mavromichalis in a recent radio interviewed said he would seek the seat should the recall signatures be certified for the remainder of Bonin’s current term.

A proponent of the recall, his platform will be centered around ending the homeless encampments, getting the unhoused indoors, repairing relations with LAPD while working with Sheriff Villanueva and restoring the community values of homeowners and tenants across the district.

To add insult to injury for the absent Bonin, his nemesis LA County Sheriff Alex Villanueva was on hand to greet the large crowd and is recognized by many as the real reason Venice Beach was cleaned up of homeless encampments contrary to the notion that Bonin was somehow responsible for this transformation of sorts that saw Oceanfront Walk deteriorate into a virtual slum by the sea on his watch.

Villanueva was greeted to a nice applause for his efforts on behalf of Dogtown as he prepares his own reelection efforts.

And while the evening was really just about community, music and fun, the scent of recalls and reelection campaigns were somewhat evident to those seemingly in the know.

The impact of nearly 40,000 signatures gathered is having a real impact on LA politics and Team Bonin is worried.

As the recall revelers will be meeting next week to celebrate their efforts, the battle to unseat Bonin has just begun and those interested in becoming his successor are now starting to take shape.

And this time around, Venice will be at the head of the line in this process to select a new council member.

The author is a member of the Outreach and Oceanfront Walk Committees of the Venice Neighborhood Council (www.venicenc.org) and can be reached at (310) 621-3775 or via e-mail at nantoni@mindspring.com

By Yo Venice Staff December 9, 2021
in Opinion
Related Posts