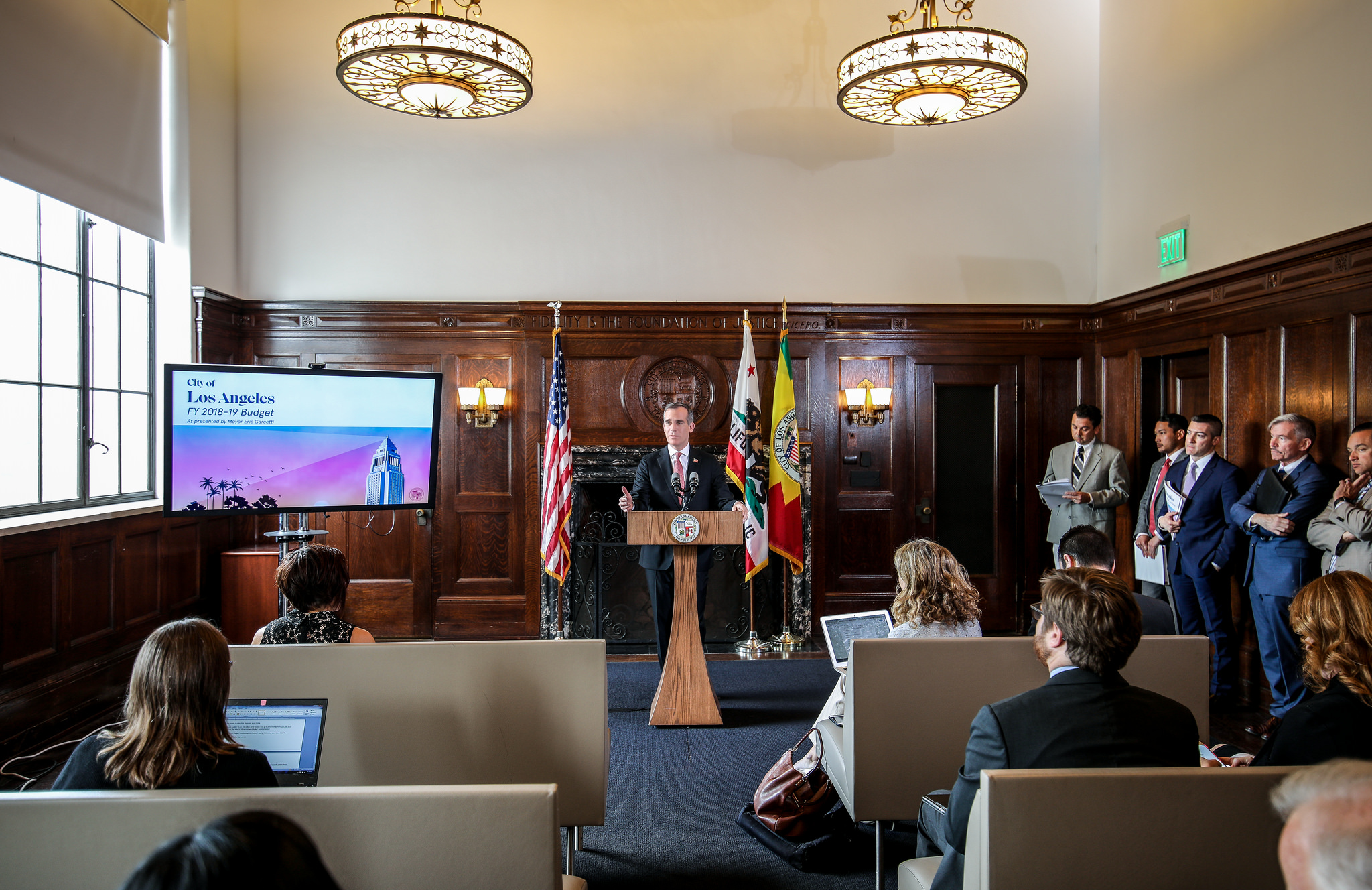 “This $9.9 billion spending plan would more than double the City’s in the fight against homelessness,” Garcetti’s office said in a press release. “Mayor Garcetti’s proposed budget substantially increases spending to fix L.A.’s streets and sidewalks, and make them safer for everyone.”

This next fiscal year will be the first full year of Proposition HHH funding, the ballot initiative that L.A. voters passed in 2016 to invest billions of dollars in homeless housing. Los Angeles City Councilmember Mike Bonin, who serves on the City Council’s Budget and Finance Committee, told Yo! Venice that these funds will help with the City’s effort to end the homeless crisis.

“The smart and important investments in combatting the homelessness crisis will help us reduce the number of homeless encampments in our neighborhoods by offering people shelter,” Bonin said. “I am encouraged and excited that the Mayor’s proposed budget recognizes the good that can come from strategically investing in solving the most pressing issues facing our neighborhoods.”

Mark Ryavec, President of the Venice Stakeholders Association (VSA) told Yo! Venice that the HHH funds will not be enough to make a dent in the homeless population. He thinks that the approach the City is taking to tackle the crisis has not been working and that a new strategy needs to be developed.

“There is very little new general fund money coming into the coffers for serving the homeless,” Ryavec said. “We are going to burn through the HHH money while housing only a small number of people. I think the model is inherently a model that will fail to really address our homeless problem and the burden it places on our community.

Bonin said that the budget should benefit Venice residents due to the increased funding slotted for both homelessness and traffic safety, two issues pertinent to Venice.

“These are both crucial priorities for Venice, and I am encouraged and excited that the Mayor’s proposed budget recognizes the good that can come from strategically investing in solving the most pressing issues facing our neighborhoods,” Bonin said.

The budget proposal is also being touted by the Mayor as being financially responsible.

“This year’s budget increases the Reserve Fund to $343 million, or 5.56% of the overall budget; and includes a Budget Stabilization Fund that surpasses $100 million for the first time ever,” Garcetti said.

The budget is now in the midst of being reviewed by the City Council Budget and Finance Committee. During weeks of scheduled hearings, the City Council will work to find common ground with the Mayor and pass a finalized budget before the new fiscal year, which begins in July.

By Sam Catanzaro May 10, 2018
in Opinion
Related Posts