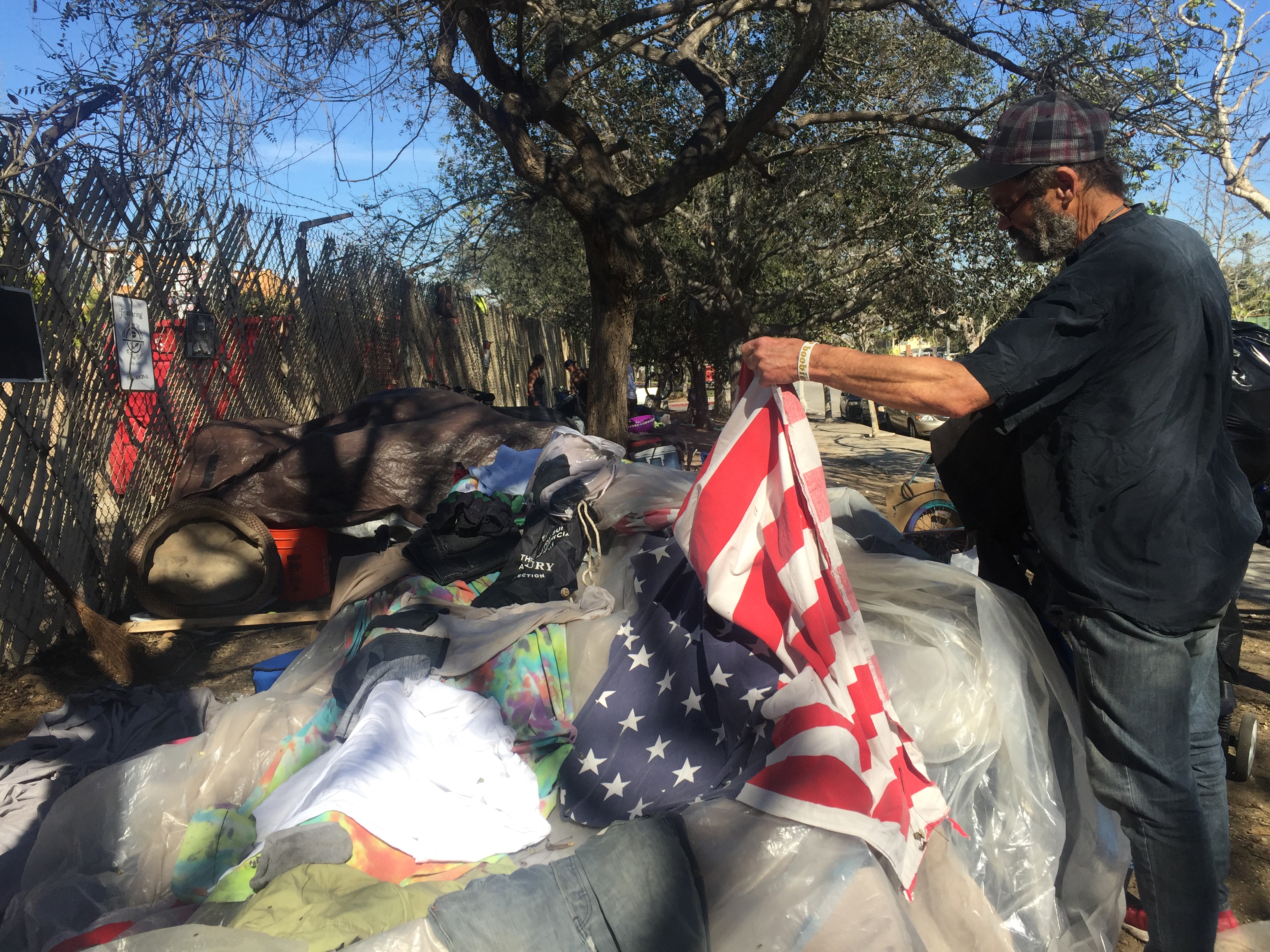 Ask any homeless neighbor in Venice what they want, and often it’s respect.

“I see people walk past every day, and I say ‘Hi,’ but they just put their head down and keep walking. I assume they’re deaf because I’m sure their mama didn’t raise them to be that rude,” said Michael Greiner.

For now, Greiner sleeps under a crinkled blue tarpaulin in the growing encampment at the corner of Venice Boulevard and Electric Avenue in Venice.

Suffering Bipolar Disorder, Greiner told Yo! Venice he is homeless by choice. He survives off a $930-a-month widower’s pension. After his wife died seven years ago, Greiner reasoned the money would go farther Mexico. However, passing through Venice from Missouri on his was south of the border, he decided to stay.

He told Yo! Venice that he is an homeless advocate.

“The money lasts three days. I make sandwiches for everyone,” Greiner said. He explained that he used to camp on the Venice Boardwalk before police issued a stay-away order on him for all of Ocean Front Walk. Greiner said it was because of the sandwiches. Now, he bounces around to whatever encampment in Venice causes him the least grief. For now, it is Venice Electric, but he said he is planning a move somewhere off Lincoln Boulevard.

Pulling a dress shirt out of his belongings, wet from the rain, he hangs it over his tarp in the sun to dry. Open to the fact he suffers Bipolar Disorder, Greiner said he’d like to join the Venice Neighborhood Council and help educate others who are homeless and mentally ill.“People think the meds get you down. The old meds did, the new ones don’t. Not a lot of people know this, and so they don’t take anything,” Greiner said.

Greiner is easy to listen to. There is no denying his intelligence. He imitates the characters of which he speaks with cartoon-like voices. Toothless gums and whistling lips, he replayed the time he gave a 5-year-old child a stuffed elephant he found in the trash. He said he finds all sorts of great things in the garbage, including signs of God. “I say, ‘God show me you’re here and I’ll see trash arranged in a certain way and I’ll know.”

With a very different story, a lady in the camp, who didn’t want to be named but was happy to speak with Yo! Venice, said she took care of her “midlife crisis” by self-medicating with meth. “I used to own a house outright, and I lost it in Hurricane Harvey.” A prior user, the woman said that the stress turned her back to drugs. “I gave my 4-year-old to my sister, and I decided to come and be homeless in Venice.” She explained that she plans to spend the next few years in Venice escaping her pain through meth. Then, she’ll go home and pull her life together.

Also in the neighborhood is Deborah. She shared her story of buying a house in Venice in 1990. “It was when Venice was really quite dangerous,” she said. The place cost only a few hundred thousand dollars and months after getting her mortgage, Deborah who is an alcoholic, lost her job. “Facing the thought of losing my home, I walked out onto the front porch with a glass of wine in my hand, and I fell right through the deck.”

Standing knee-deep in splintered wood, Deborah said she could only laugh. She told Yo! Venice she knew she had to pick herself up, get another job, and fight to keep her house. At the risk of simplifying a long, hard struggle; Deborah still has a mortgage and her home.

A housed neighbor, who lives near the Venice Electric encampment, Deborah said she worries about neighborhood safety, and not just for that of those housed. “A lot happens after 11 p.m. Drinking and drugs. The wet and cold weather makes it worse,” she said.“I try not to walk past it because I don’t know who will be there and worry they might be crazy or violent.”

Deborah wants the camp cleared, but she understands addiction and mental illness traps many on the street. “They need help but won’t accept help, and until they accept it, they won’t get help,” she said of the catch-22 that makes helping homeless a convoluted task.

Case in point, the Hurricane Harvey survivor who lives in the encampment, said when asked about services that might help her addiction, “If my kid isn’t enough motivation to get me to quit meth then I don’t think anything else is going to work.”

As a mother, Deborah is horrified at the thought that someone would choose drugs over their child. However, she has compassion. Quoting an Alcoholics Anonymous line, “your best thinking got you here.” She explained that people make choices from wherever they are at the time and that a meth addict or someone with mental illness probably isn’t in a place to make a great choice. “It’s about hitting rock bottom, whatever that is for someone,” Deborah said.

While a homeless encampment is nothing new in Venice and the one on Venice and Electric is not the worst in the community, the question on how to fix the problem garners a clash of ideas.

In an email that Deborah shared with Yo! Venice, acting Senior Lead Officer Jin Kwon of LAPD Pacific Division wrote, “Officer Delatori and I have been working with both social service agencies and other City entities to deal with the issue. Besides what patrol officers have been doing, in the last two weeks, we coordinated with our Homeless Outreach Proactive Engagement (HOPE) Team to offer homeless services as well impound items at the encampment that were in violation of our municipal codes.”

At a Venice Chamber of Commerce meeting in February, Senior Lead Officer Kristin Delatori said a group of neighbors near Venice and Electric had a beautification plan for the corner. It is a pattern in communities where neighbors, trying to do their part in fixing a leak at their end of the sinking ship that is the city-wide homeless crisis, have often turned. Stuck between a rock and a hard place, neighbors use landscaping with rocks to make camping hard. It’s something that “happened on Electric and California and Flower West of Lincoln,” said Delatori. Even local businesses pitched in to help offset the cost.

Deborah said she supports the idea of landscaping but is upset it has come to this and that more of her homeless neighbors couldn’t be helped to help themselves. “With the drugs and mental illness, I don’t know if we can help. What are you going to do with people who think they want to live wherever they want?”

As Greiner said, if he gets too much grief, he’ll just move to the next encampment.