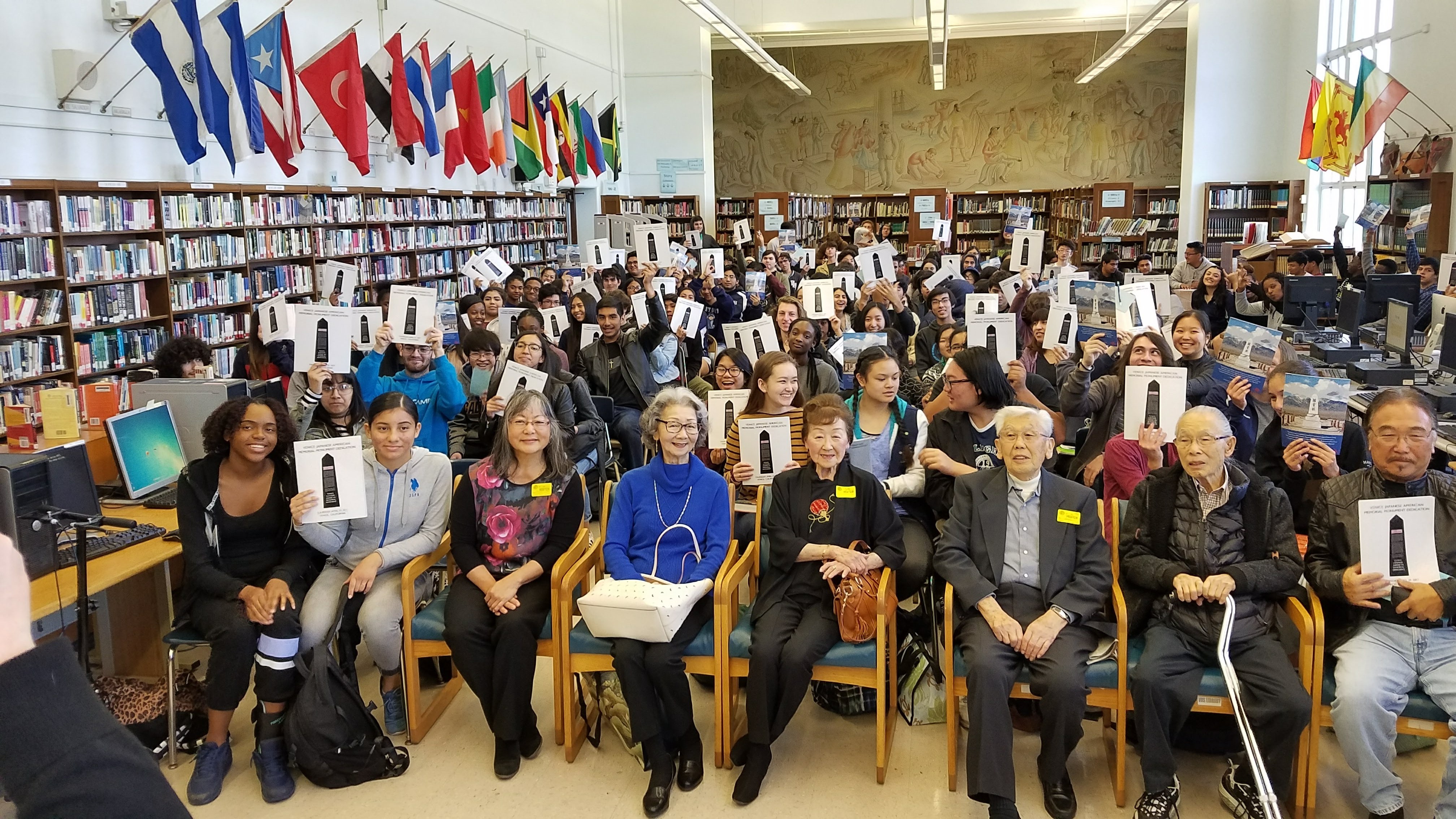 April, marks the first anniversary of the VJAMM dedication at the northwest corner of Venice and Lincoln Boulevards. The mural commemorates the site from where, during WWII, thousands of Japanese Americans were sent to internment camps. Forcibly removed from Venice, Santa Monica, and Malibu, people lined up with only what they could carry and were transported to the American concentration camp at Manzanar in Central California.

Maeda told the students at Venice High how at just 15 years old he was forced from his life as a junior at Santa Monica High School and taken to Manzanar Detention Center. He told of sleepless nights in his cot in the barracks in the middle of a desert, questioning how he, an American-born U. S. citizen, could be imprisoned inside a barbed wire enclosure, having broken no laws and having had zero due process. In time, Maeda distinguished himself at the camp, performing in plays and in musical comedy, getting elected Senior Class President of the Manzanar High School class of 1944.

Ioki, shared a similar story, at thirteen he was incarcerated at Manzanar. He said when he arrived he wondered why people were wearing goggles. He soon experienced fierce windstorms that kicked up dust everywhere and into the barracks, through cracks in the green wood floors and wall boards that shrank as they weathered. Plucked from his freshman class at Venice High School, Ioki found himself in a sophomore class at Manzanar High School, where he said he struggled to keep up with the curriculum and his slightly older classmates.

Kakehashi added to the story and said the dust abated as the internees farmed the land at Manzanar, growing enough vegetables to feed themselves as well as to ship to other American concentration camps such as Tule Lake in northern California, and Poston and Gila River in Arizona.

Also, a former Venice High student, while at Manzanar, Kakehashi worked at the camp hospital as a medical stenographer. She recalled getting into trouble the day she and her co-workers persuaded one of their truck driver friends to drive them ten miles beyond the barbed wire fencing, to play in the snow at the foot of the Sierra Nevada mountains.

Nomura, another internee, and former Venice High School student was 16, the same age as many of the Venice High School students to whom she spoke when forcibly removed and imprisoned in Manzanar. Nomura said she honed her singing talent with Manzanar High School drama and music teacher, Lou Frizzell, who encouraged her to sing at various camp occasions, including the camp dances where she earned her nickname, the Songbird of Manzanar.

Before the Venice High School students, Nomura sang a song Frizzell composed for her, “When I Can,” known unofficially as the Manzanar Song, about the yearnings of young lovers who have no privacy in camp.

For the internees, sharing their stories acts as a reminder for people to be forever vigilant about defending constitutional rights that no group based solely on ethnicity, gender, sexual orientation, race or religion should ever suffer similar persecution.

This year, the VJAMM Committee will honor the legacy of all internees at the VJAMM site on the Venice Boulevard. Following the ceremony will be a fundraising lunch at Hama Sushi at 213 Windward Avenue in Venice. For more information email phyllishayashibara@gmail.com.