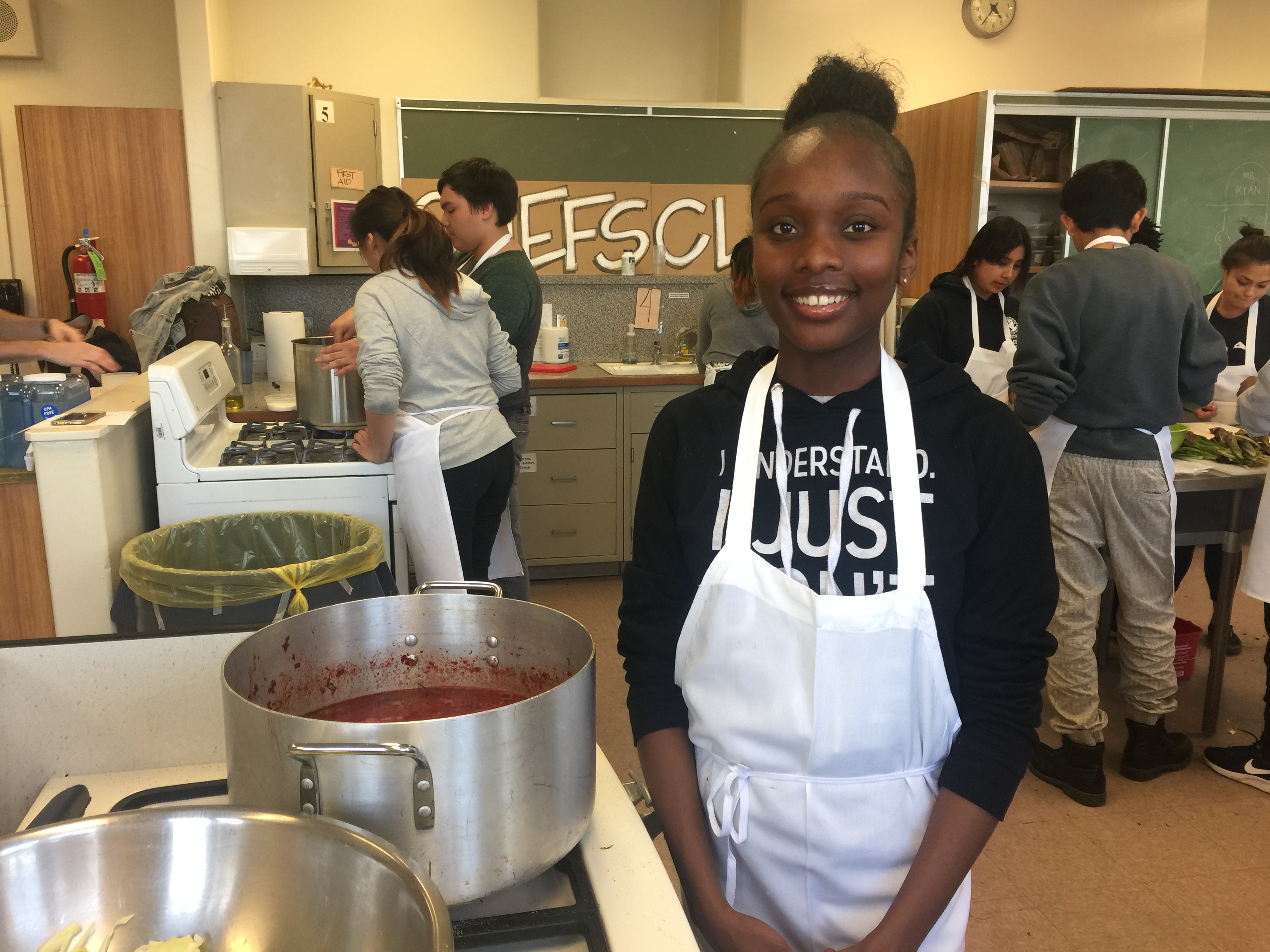 Venice High Student Imari has learned how to cook and make healthy choices.

Something is cooking at Venice High School. Local business Gjelina has teamed up with the Venice Boys and Girls Club to offer an after-school program that teaches kids all about the food they eat, and how to cook it.

“It’s really fun. I like it. We get to learn a lot of new stuff I don’t think I would have learned unless I would have joined,” said Venice High student Corina.

The school already had a home economics room complete with; benches, ovens, stovetops, and refrigerators. Basically everything. Including the kitchen sink. The only thing missing was a teacher to take the class, and this is where Gjelina stepped in. Working in partnership with the Venice Boys and Girls Club; volunteers from Gjelina, GTA, and Gjusta share their cooking expertise weekly at the Venice High Cooking Club.

Venice High School Principal Oryla Wiedoeft “wanted to revive the culinary program,” said Angela Hughes, Director of Gjelina’s Volunteer Program. “We were doing some volunteering at other local schools, like Westminster, all local Venice-based schools,” still, Hughes said, they did not expect the classes at Venice High to be such a hit. “It was amazing the response. We had no idea that kids were really waiting for this.”

Now in its second year, the Cooking Club has upward of 30 students on any given week. Most do it just for fun.

“It’s just so fun learning so much. Learning about so many vegetables and fruits that you’ve never heard of,” said Venice High student David, who was part of the group of kids assigned to harvesting. The team was sent down to the school’s learning garden to pick snap peas and pull up beets for the borscht they were cooking that day.

Harvesting the fruits and vegetables is something Corina enjoys most about the cooking club. “They bring us down here to the garden, and they make us aware of where the food comes from and the process of getting the food from the garden to the table. It’s fun just to come down here and be in nature and get to cook it and make something really delicious out of it,” she said.

While many have joined the cooking club for fun, for others, it has provided a serious opportunity. “We had about six kids from the first program that actually did internships, paid internships, at Gjusta,” said Hughes.

While the class has provided opportunities for those interested in a career in the kitchen, Hughes said the Club works for everyone, “You know, it’s just really a sense of empowerment that comes out of it, regardless of where you take it.”

Many of the kids joined the Club because they couldn’t cook and wanted to learn. “When we learned to make mash potatoes I thought it was so hard, but it’s just butter and easy little stuff,” said Venice High student, Imari.

Imari has found cooking to be a good metaphor for life.

“It’s not really right or wrong when you’re cooking. Because, if you add too much seasoning or something, you can add everything else to even it out. And you never know, you may make a mistake, and then the food ends up turning out to be better than what you expected,” she said.

Another upside for many of the students has been learning to make healthy choices. “I’m a picky eater. I usually eat all unhealthy food and stuff. It feels good knowing how to cook. And knowing what you are cooking,” said Imari.

For Corina, it has been eye-opening to experience eating food straight from the ground. “There’s a subtle, different taste from the freshly grown foods versus the processed food you buy in the market. The best thing about it is the things we’re eating are just picked out of the garden,” she said.

Information is power for the kids in the Cooking Club. “To see them get a recipe, break it down, collaborate, get in a group and see how easy it is to eat well,” said Hughes.

The eating part of the program is David’s favorite bit. “Of course, the end result is always you get to eat. So, that’s always great as well. I just love everything about cooking,” he said.

Co-Owner of Gjelina, Travis Lett is a regular volunteer at the Cooking Club. He told Yo! Venice there are bigger plans for the culinary program. The next step, however, will be to secure more funding to enable expansion. As Hughes said, she is excited about how far the program “can grow.”