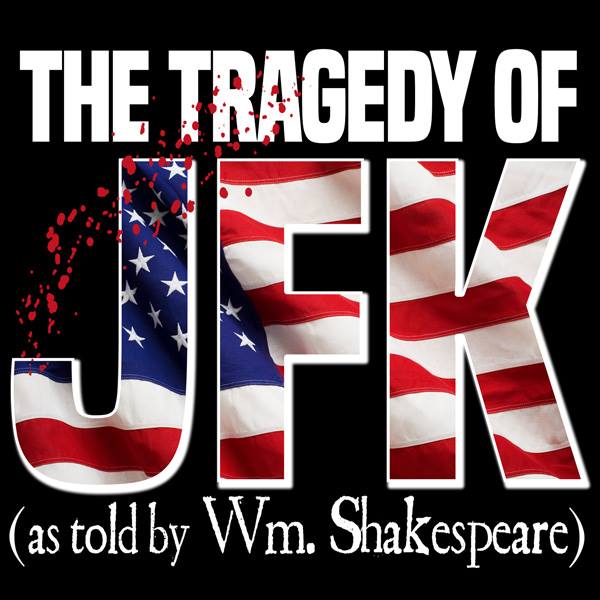 “Something is rotten in the state of Denmark.” That infamous line from William Shakespeare’s “Hamlet” was spoken by a palace guard after seeing the dead king walking around the palace walls. To this day, it is used to describe corruption or a situation that doesn’t pass the “smell factor.”

Although that line is not in The Blank Theatre’s world premiere production of “The Tragedy of JFK (as told by Wm. Shakespeare,”) director Daniel Henning drew upon “Julius Caesar,” one of the Bard’s most provocative plays as it illuminated corruption, conspiracy, and betrayal in Caesar’s inner, most trusted circle. Brilliantly conceived and adapted by Henning, his production is an edge-ofyour-seat thriller. It makes the case that the heinous plot to assassinate President John Fitzgerald Kennedy emanated from the highest placed government officials, the military, and members of his most trusted inner circle.

Following the introduction of these pivotal, historical characters, the dialogue then seamlessly segues into Shakespearean text and begins to create an alternative interpretation of the tragic events leading up to the assassination of JFK on November 22, 1963. Johnson (Brutus)* and Hoover (Cassius) is discussing the president (Julius Caesar) in a hushed tone: “This womanizer has become a God.” Hoover torments Johnson pointing out that he does not get the attention he deserves.  One by one, the treacherous Hoover bores his way into those in JFK’s inner circle finally convincing them that it was best for the country if their “king” was dead. During most of these conspiratorial scenes, Lee Harvey Oswald sits quietly with his eyes closed as if awaiting further instructions. It is clear that he has a relationship with LBJ.

Johnson is not without inner conflict and Lady Bird, (Portia) on seeing his preoccupation says, “You stare at me with ungentle looks.” She wants to know what is happening and beseeches him to confide in her, “Knowest thou of any harm towards him?”

In the meantime, Jackie (Pompeia) has had a bad dream about a statue spurting blood and

entreats her husband, “not to go forth today.” To please her he agrees, “I will not come.” His secretary, Evelyn Lincoln (Spurinna) also begs him not to visit Dallas. However, he is pressured by Hoover and LBJ that he must go as planned and finally gives in, asking Jackie to get dressed so they can depart. She soon appears wearing the pink suit and hat which, I must admit, gave me a bit of a jolt. They are now in Dallas. Jackie is holding a bouquet of flowers and smiling. Augmenting the onstage action are videos replaying scenes that we will never forget, including the Zapruder film, which captured the motorcade as it passed through Dealey Plaza in Dallas. Shots ring out on stage hitting both Kennedy and Governor Connally and, well, we all know how that ended.

Hoover does not want Bobby Kennedy (Marc Anthony) to speak at his brother’s funeral but finally gives in and Bobby, in front of a flag-draped coffin, gives a heart wrenching variation of that famous soliloquy, “Friends, Romans and Countrymen,” beginning with “I come to bury Jack, not to praise him,” delicately alluding to LBJ’s and Hoover’s integrity. This is a particularly poignant moment in a play filled with unending dramatic moments from beginning to end. Augmenting this action, are projections of newspapers from around the country with their screaming headlines about the assassination. We also see a video LBJ’s televised speech to the nation.

But all is not well in Washington. Johnson and Hoover are at odds with each other and LBJ is faced with the growing civil rights movement. The march on Alabama is relived both on stage and through video. The ensemble gives a stirring rendition of the Civil Rights fighting song, “Ain’t Gonna Let Nobody Turn Me Around” and we hear Martin Luther King say “We are on the move now,” as he and his protestors head to Montgomery, Alabama. The time frame moves forward. Johnson declines running for re-election in 1968 and later on in the year, we once again relive an unforgettable tragedy of Bobby Kennedy being shot in the Ambassador Hotel in Pasadena, California.

Director Henning has put together a remarkable cast, each of whom delivers a riveting, articulate performance. There are several characterizations that are particularly commanding and include, Tony Abatemarco’s J. Edgar Hoover, Susan Denaker’s Lady Bird Johnson, and Time Winters’ Lyndon Baines Johnson. His physical and vocal work so captured the essence of LBJ, that you could almost swear he is alive and well and currently on stage at The Blank Theatre’s production of “The Tragedy of JFK (as told by Wm. Shakespeare.)”

The production values serve the play well with a simple set by Sydney Russell, lighting by Brandon Baruch, costumes by Naila Aladdin Sanders, and sound design by Warren Davis. The video portions are not credited in the program so one must assume it’s the work of a most creative director.

Although the material will catapult you back to a painful time in American history, this highly theatrical presentation of Henning’s provocative thesis is fascinating and is one of the reasons why theatre is such a valuable art form and must be protected at all costs. To get off topic for just a moment, almost all the small theatres in Los Angeles operate under the banner of Equity Waiver, which is currently under attack by Equity who wants to remove that banner thus demanding that theatres pay their actors union scale. Most of these theatres struggle just to keep their doors open so to remove that banner would cause the death of hundreds of small theatres and bring to a halt the development of remarkable material such as what is currently on stage at the Skylight Theatre.

*Names of the matching characters in Julius Caesar are in parentheses.

The Tragedy of JFK (as told by Wm. Shakespeare) (A Guest Production)

Fall fun at Palisades-Malibu YMCA pumpkin patch, hear from local children on what makes the perfect pumpkin. Video brought to you...