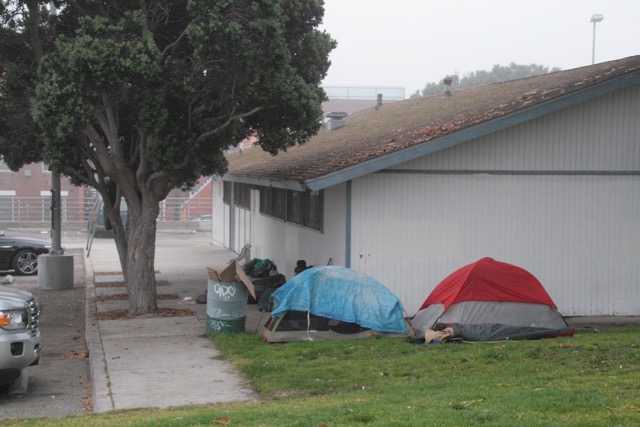 The Los Angeles City Council will consider today a bond measure and a parcel tax initiative that are both being proposed for the November ballot and are aimed at raising money to address the city’s homelessness problem.

The council has yet to decide which revenue-raising strategy to move
forward with – a $1.2 billion bond to pay for housing for the homeless over a
decade, or a 10-year parcel tax to raise $80 million per year until 2027.

The council has the option of placing both the bond and tax measures on the ballot,
in which case they would have until Aug. 12 to decide which one to withdraw.

City officials estimate it will cost about $1.85 billion to adequately house and provide services to homeless individuals and families in Los Angeles. A recent count put the city’s homeless population at about 27,000 people.

The money from either the tax or the bond would be spent on permanent
supportive housing, which are residences for the formerly homeless that
includes health and counseling services within a building. The funds would also
be earmarked for facilities serving the homeless, such as storage, shelters and
showers.

Much of the debate in recent days has been around whether a portion of
the funds should also go toward affordable housing or programs, as opposed to
putting all of the funds into housing for those who are homeless. Also being
discussed was whether funding should go toward helping low-income people become
first-time home buyers, and where to draw the household income line for
deciding who the majority of the funds should go to.

The recommendations going to the City Council today no longer includes
earmarks for first-time homebuyer programs, and would provide the overwhelming
majority of the funding to individuals and families who are extremely low- and
very low-income, while the remaining would go to those who are low-income
households that earn between 51-80 percent of the Average Median Income.

City leaders are hoping to submit the proposed measure or measures by
July 1 so that they could be placed on the November ballot. At least two City Council members. Jose Huizar and Marqueece Harris-Dawson are pushing for the bond proposal, with the two pointing to recent polling indicating the public would be more receptive to it over a tax measure.