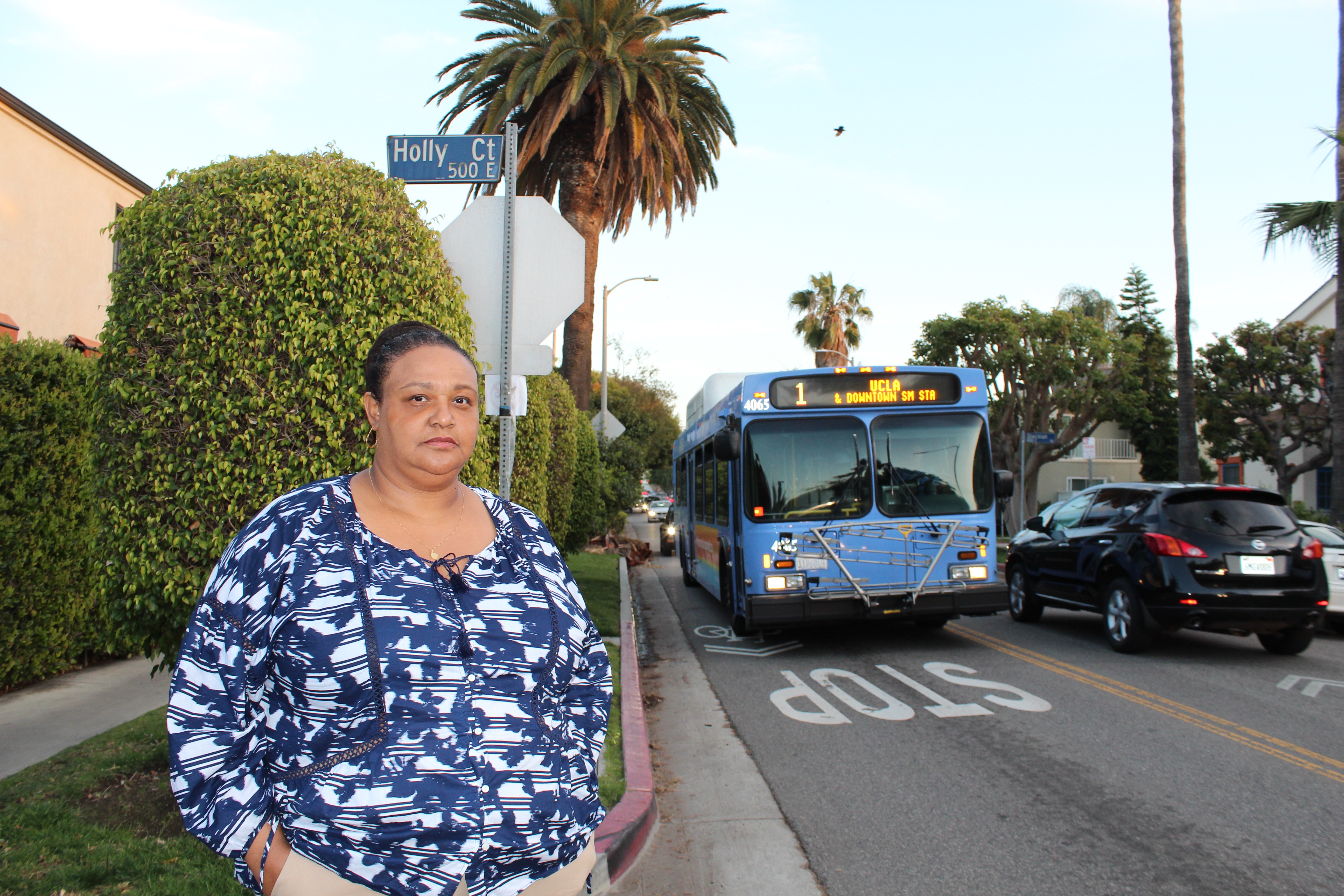 Signs printed from home computers are posted in the windows of nearly every other house along Ocean Avenue in Venice. A simple graphic makes their intent clear. People living here want buses off their street.

“It’s not safe,” says Allen Spiegler as he picks up his kid’s bike that lies on the front porch of his Ocean Avenue home. Spiegler is one of many on the street who are not happy with their new neighbor.

Since February 21st this year, route changes within Santa Monica’s Big Blue Bus network have seen Route 1 buses travel down Ocean Avenue. Linking Venice and Washington Boulevards, the street has always been one of the neighborhood’s most popular ways to avoid congestion on Pacific Avenue. Although during peak hours, traffic on Ocean Avenue also crawls bumper to bumper, residents saying that adding buses to the mix will only make things worse.

Ocean Avenue local, Mary Donaldson, says the people living on the street are a tight-knit group. “People have keys to each other’s houses. It’s not just a street with cars. It’s a community,” Donaldson told Yo! Venice.

A community that does not feel safe having a number of 32,000-pound buses hurtling through stop signs, and zipping around bicycles on the narrow street, Donaldson said. Both she and Spiegler showed such video footage that they shot on their smartphones.

“This street has a 6,000-pound weight limit. They say buses are exempt. Is the City not concerned about the damage of buses every 10 minutes in each direction, 18.5 hours a day will cause to the road and wastewater system underneath?” asked Spiegler.

Suja Lowenthal is the Planning and Community Engagement Manager at Big Blue Bus. She explained that the law permits buses the legal right to be on any street, “it is important to make clear that

Big Blue Bus is not breaking the law,” she said, adding that “while this may be painful for some to hear, we want to empower a conversation based in reality, rather than have either group waste time chasing misinformation.”

Angela Campbell has lived on Ocean Avenue for 22 years. She says no one on the street had any idea the Big Blue Bus was headed their way. “When I first head a bus down the street I though it must be taking a detour. I wondered do buses even make detours? Then the next day I was driving home from work and there was a bus in front of me on the street and I thought, ‘oh no, don’t tell me there’s a new bus route on my street,’ I was depressed,” says Campbell.

While neighbors say the buses arrived without warning, Big Blue Bus says they attempted to reach out to the community, even contacting the Venice Neighborhood Council directly to alert locals of the planned route changes. However, they say, none of their three telephone calls were answered, “there seems to be a notion that there is somehow an easy way to get people’s attention in advance of change,” says Lowenthal.

It appears that the news that the Big Blue Buses parade was on its way to Ocean Avenue did not catch the attention of the neighborhood.

“We mailed letters in late December and early January of this year to households that were within a few houses on either side of the street of the proposed bus stops and received almost no feedback,” Lowenthal said. “Even this did not register with folks as impacting them.”

Campbell said that she heard nothing of and saw no letters, “they say the sent them. I didn’t see anything.” Lowenthal added that Big Blue Bus doesn’t blame residents for missing the news, “everyone is overwhelmed with mail, email, and messaging,” and that this is an ongoing problem for anyone trying to reach out and be heard in any neighborhood.

Where Big Blue Bus did manage to make an impact was in the Palms/West LA area.

“We received over 500 surveys regarding Route 17 alone, and subsequently had a meeting with interested stakeholders attended by approximately 75 people. We were able to find common ground and moved forward. This is how it is supposed to work, but it took community leaders taking note of the survey, sending it out to their lists, and people forwarding the link. We didn’t have that happen in Venice, and we are sorry that it didn’t,” says Lowenthal.

With the new bus route now active, locals are starting to take notice. “I just want to know why they need to come down a residential street. They could take Abbot Kinney or Pacific,” says Campbell. Her question is one repeated by many Ocean Ave. neighbors.

Spiegler flicks through a powerpoint presentation he and a group of residents who live on the street put together to present at a community meeting Councilmember Mike Bonin called to mediate between disgruntled locals and the Big Blue Bus Wednesday March 9. Spiegler points out the pages that propose alternate routes. These include re-routing the buses along the southend of Abbot Kinney Boulevard or Pacific Avenue.

Lowenthal explains the reasoning behind decisions to travel the new route: “In the case of Ocean, it is because it was the shortest distance between Venice Circle and the west side of Marina Del Rey and it also offered good access for folks walking out from neighborhoods.

Pacific does not have ADA accessible cross- walks, and it is already a Culver City Bus route. Abbott Kinney is a significantly longer route to Marina Del Rey. Some attendees of the meeting said, ‘It’s only a mile,’ but that is a long way when you are making the trip many times a day. This translates in to tens of thousands of dollars in extra costs just for that segment. This does not mean we aren’t listening or taking this alternative in to consideration; just to share why we chose what we chose.”

With the Expo Line opening in May, the new Big Blue Bus routes were planned with the idea of carrying people from their neighborhood to the train. Currently 51,000 people a day ride the Big Blue Bus network and with the changes being put in place that number is expected to rise 14 percent.

Common ground for all is that an effective pub- lic transport system is important, “folks are angry about traffic and we don’t blame them. The state of California is estimating the population of LA County to rise by an additional 550,000 people by 2025,” says Lowenthal.

Spiegler says no one disagrees with Big Blue Bus on this one point, “we all agree, something has to be done to encourage more ‘green’ transport. But this doesn’t mean sending a bus down a street it barely fits.”

Lowenthal says, “We know that what we are doing is seen by some as making matters worse, but we ask here that they reconsider that position as public transit eases single-occupant vehicle congestion and improves overall quality of life.”

For Campbell it is difficult to see how having a bus rumble past her home for, “all day, starting at 5:30am,” does anything but decrease her quality of life. She says the community is willing to pit their weight against that of the Big Blue Bus, quite literally, “we want to get the buses off our street, that’s our goal and if we have to create a personal body barricade that’s what we’ll do.”

Lowenthal hopes, for safety reasons, it does not come to this, “we plan to continue listening and analyzing what has been said. No decisions have been made. We are looking more closely at what was presented as alternatives.”