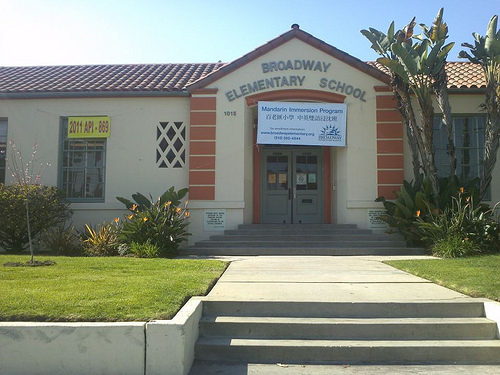 1:31pm
A growing coalition of 290 active and engaged public school parents is calling on School Board President Steve Zimmer and Superintendent Michelle King to reverse the Los Angeles Unified School District’s decision to cut in half the Mandarin Immersion program at Venice’s racially and economically diverse Broadway Elementary School. With plans for the next school year being finalized in the next few weeks, parents note that the time for action is now.

Last week, thousands rallied at LAUSD schools as part of a “walk in” to show support for public schools. Cutting this program, the parents say, validates the narrative that the LAUSD is unwilling or unable to compete with charter and private operators.

“This program makes our kids more competitive and shows how the District can compete against charter and private operators who are siphoning away public school parents, students and resources,” said Jennifer Pullen, a Broadway Elementary School parent and President of Parents for Progressive Education. “Why is the District cutting a program that promotes such high student achievement and that is in such high demand from parents? It’s the opposite of what they should be doing. ”

If the District stands by its decision to cut the number of incoming Kindergarten Mandarin Immersion seats from 96 to 48, there will be only a slim chance for new families to enroll their children in the program because more than 40 seats are already claimed by sibling-priority students. This directly dis-serves the local student population served by Broadway Elementary, the parents note. Cutting the Kindergarten program would also have lasting effects in subsequent years to future Mandarin Immersion classes in grades 1 through 5.

Parents for Progressive Education calls upon the District leaders to do the following:

“Reverse the decision to cut two Kindergarten Mandarin Immersion classes from Broadway Elementary School in Venice. Stop hurting kids. Stop shooting yourself in the foot. Uphold your commitment to a program that is proven to work for students and is reinvigorating a public school that was facing closure.”

Los Angeles’ public schools are facing ever-stiffening competition from private schools and private operators. Parents are removing their children from their local public schools in droves, reducing enrollment and parental involvement. This is creating a Tale of Two Education Systems for Los Angeles students that harms their ability to succeed and Los Angeles’ future competitiveness.

Some parents, however, believe in public school education, and rather than flee, they have devoted time and resources – in partnership with engaged and passionate school officials – to improve public schools. Unfortunately, by cutting the Mandarin Immersion program in half at Broadway Elementary School, the District is hurting students and is:

–Rejecting neighborhood parents who are eager to enroll their kids in their local school. Parents for Progressive Education is fighting for new and local families and a brighter future for Broadway Elementary and our public schools as a whole.

–Gutting a program that has proven successful in the short-term and that has long-term benefits for students in terms of development, language skills, cultural awareness and competitiveness in the global economy.

–Discouraging parental donations, time and involvement in public schools, which face limited resources and where parental involvement is often a key point of contrast with charter and private options.

–Proving itself to be a moribund bureaucracy more interested in perpetuating the status quo than increasing the quality of education for our kids.

In 2010, with leadership from Board Member Zimmer (and Parents for Progressive Education is hoping for the same leadership here) and Principal Susan Wang, parents helped create the Mandarin Language immersion program at a time when, according to the District, Broadway Elementary was facing a shut down due to low enrollment.
Originally 2 classes comprising 24 students each, the program attracted so much demand that it was increased to a total of 4 Kindergarten classes comprising 96 students. Students are now learning in Mandarin in grades K-5 at Broadway.

Program students spend half their day learning in English and the other half learning in Mandarin. It is not a “language” class. Rather, instruction across the spectrum of elementary education – science, math, etc. – is conducted in Mandarin.

Parents literally camped out on the sidewalk overnight to enroll their kids in the program, and demand soon outstripped Broadway’s capacity—the wait list is large enough to support expanding the program to two additional Kindergarten classes beyond the 4 the parents are seeking to preserve.

Unfortunately, some local residents expressed concerns about traffic, parking and potential loss of recreational space, and facing pressure, the District reversed course and cancelled the project.

Parents were discouraged, but were understanding, and they recommitted to strengthening the Mandarin Immersion program at Broadway Elementary.

But then the other shoe dropped — a directive from then-Superintendent Ray Cortines that only two Mandarin Immersion Kindergarten classes at Broadway Elementary commence in the Fall of 2016, thereby cutting the program at Broadway in half. No real alternatives to cancellation were explored.

To Parents for Progressive Education, this is unacceptable. Instead of growing a proven program, the District is cutting it off at the knees. Instead of maintaining a tremendously attractive program for local parents and involved parents to send their kids to a public school, the District is now acting to turn them away. Instead of making L.A. public schools more competitive, they are reinforcing the narrative and the reality that L.A. public schools are failing our kids, their futures and the future of our economy.

There is no justification for the District’s actions, parents say. They understand the reluctance to build. But there are currently empty and available classrooms at Broadway Elementary as well as other solutions for meeting the local demand for this program.