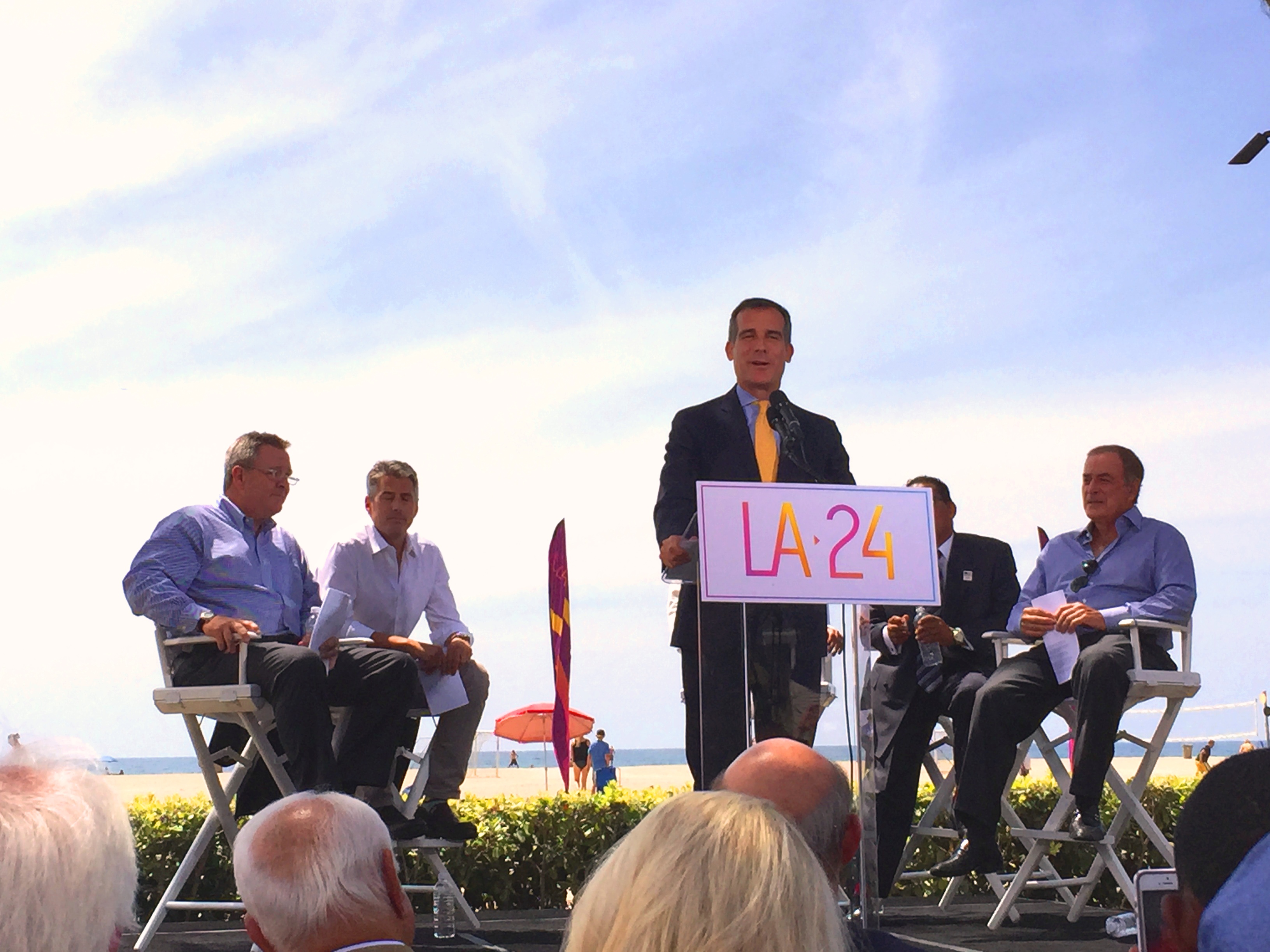 Given the obvious choice of L.A.’s own Venice Beach, with its ocean views, blue sky and palm trees, as the venue to hold the press conference to announce Los Angeles as the official U.S. bid city for the 2024 Olympics, it was odd to see Mayor Eric Garcetti standing at a podium in Santa Monica instead on Sept. 1.

Don’t get me wrong, I love Santa Monica. I was born there and have fond memories of growing up in the sleepy town that Santa Monica once was.

But doesn’t the Mayor know that Santa Monica is a separate municipality? It is not like Santa Monica is going to host a lot of events or absorb any of the cost overruns on the Olympics, which the rest of L.A., including Venice, will face if the 2024 Olympics go the way of almost every other Olympics in history.

Part of the purpose of garnering the Olympics is to boost Los Angeles’ notoriety and garner all those tourist dollars. So, what’s with putting the spotlight on our toney neighbor next door?

One poster on Yo! Venice suggested that the Mayor is scared of Venice.  Well, I understand that it would not do for him or one of the many athletes or journalists at the press conference to get a finger bitten off but I’m sure that the LAPD could have provided sufficient security just this once.

Maybe the Mayor is just not very familiar with all that Venice has to offer.

Two years ago, during the mayoral campaign, a group of Venetians attempted to remedy this. We held two well-attended fundraisers for Garcetti that raised about $30,000. We used the events as an opportunity to tell Garcetti about our on-going nightmare with the transient population and the use of Venice Beach as a campgrounds that attracts deranged and drug-addicted campers from all over the nation. He seemed to get it and gave us his personal phone number, telling us we could call him anytime. Oddly, after the election that number was disconnected and his campaign liaison moved on to other pursuits. Now no one in his office replies to telephone calls or emails. This must just be an oversight, of course.

So, let me use this column as an opportunity to acquaint His Honor with Venice’s many Olympic attributes.

First, he should consider that Venice has been pioneering new sports for Olympics consideration.

While Spain has the running of the bulls in Pamplona, we have the running of the cars on the Boardwalk. Imagine, visitors can stroll Ocean Front Walk, carefully listening for the rev of the engine of a car driven by a drugged-out guy angry at a drug deal gone bad.  Their challenge is to jump out of the way before they’re run over. No medals here, they just get to keep living. Trust me; the course is still open; I could have driven a car onto the Boardwalk at Rose Ave. last week.

The object of this sport is for the roof climber to find and disable the half naked resident before she can call for help or escape. (The climbing venue pictured is at Windward and Riviera Avenues.)

On Washington Blvd. we have the novel and ever popular homeless-on-restaurateur finger-biting and chair-tossing competitions (Clabe Hartley was just clobbered again, by a chair hurled by a deranged man. Clabe had the temerity to ask not to keep dumping all the trash cans lining the street).

On Rose Ave. there is the annual police versus knife-wielding psycho challenge. So far, the LAPD is beating all comers.

We also have the unusual sport of curtain wrestling. Never heard of it? The objective is to frighten a young woman and her children out of their skin while you bleed all over their apartment and finish by convincingly wrestling a shower curtain to the floor of their blood covered bathroom before the police can arrive.

Then, to help all those athletes increase their performance and treat their pain, there is the mile long drug emporium from one end of Venice Beach to the other.

Now, who would want to stroll the dull streets of Paris with all these entertaining options available on the streets of Venice?

And Rome, well, I’m sure the Italians will look past the revulsion I saw in their faces when they heard that their countrywoman Alice Gruppioni had been run over on a pedestrian walkway at Venice Beach and they’ll just give up their Olympic bid.

Maybe, if Garcetti can arrange to hold all the Olympic events in Santa Monica, he can convince the world that none of the visitors and athletes arriving in 2024 will get hurt. But he seems to have given up on protecting the rest of us.