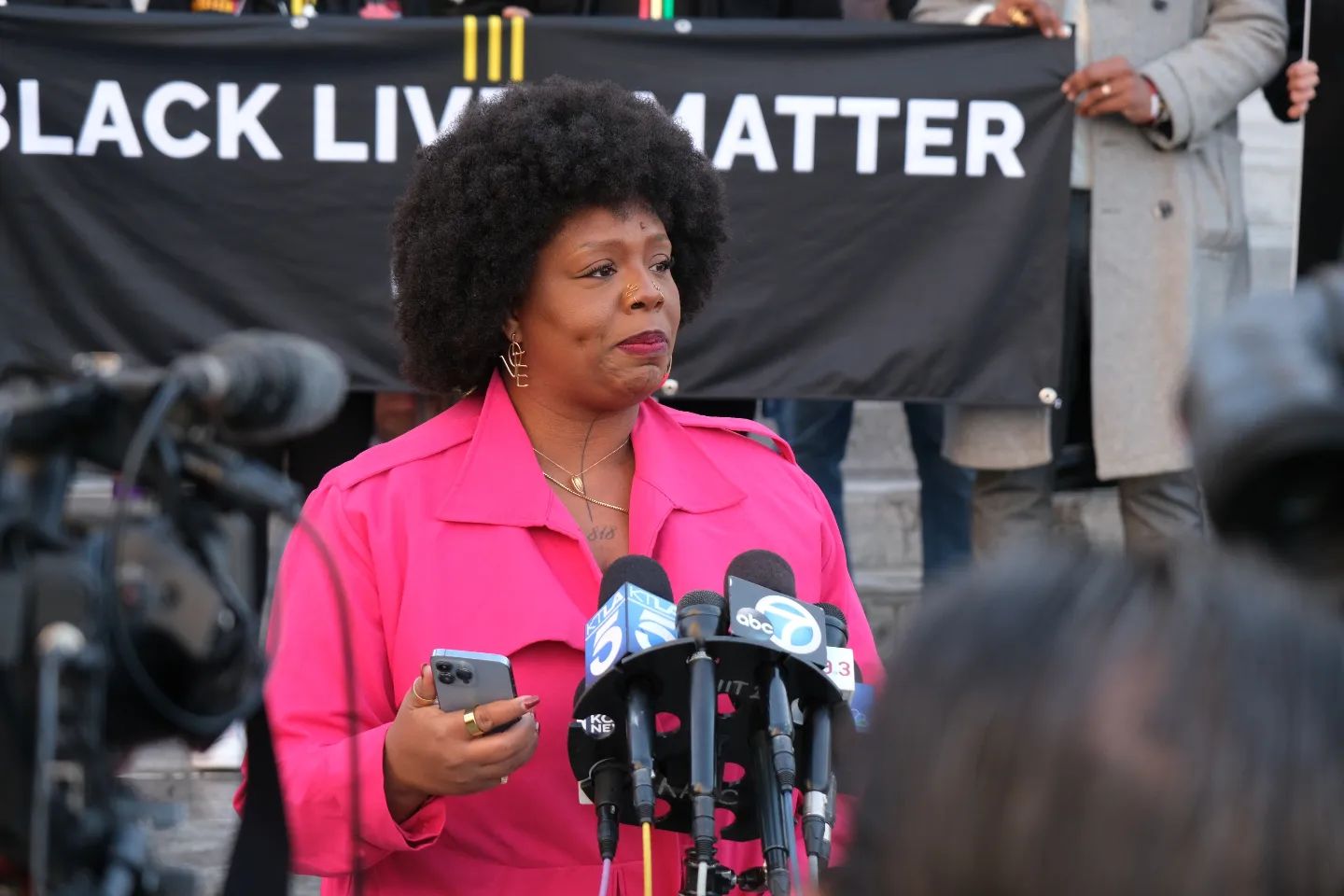 The family of Keenan Anderson gathered at City Hall this week calling for police reform, demanding the release of unedited footage of Anderson’s death and the removal of LAPD Chief Michel Moore, who is seeking reappointment. Anderson, a 31-year-old high school teacher and father, was visiting LA visiting from Washington, D.C. He is the cousin of Black Lives Matter co-founder Patrisse Cullors. He was killed after an LAPD response to a hit-and-run call in Venice on January 3.

“Swift action is what we need for these senseless killings, over-policing and miscarriages of justice handed down by law enforcement. We need this to stop,” said Keenan’s sister Dominique Anderson outside City Hall Tuesday. “Our brother Keenan deserves to be alive with his family, friends, and teaching his students.”

According to the LAPD, Anderson reportedly caused the crash and fled, leading to officers’ physical confrontation with him before they used a stun gun multiple times. He was taken into custody and died several hours later at a hospital. An LAPD police report found cocaine and marijuana in his system. No official cause of death has been given, though officials say he did suffer a heart attack.

Moore noted last week that the investigation into Anderson’s death was ongoing. He said Anderson was tased six times during the struggle with officers, a number that raised concerns.

“In my preliminary review of this incident, it’s unclear what the role of that Taser was,” Moore said. “To be clear, it’s dependent on the totality of our investigative resources, but also on medical records from the hospital as well as a coroner’s report and their formal and forensic level examination. As this investigation continues, however, I will pay close attention to the use of the Taser.”

On Tuesday, at City Hall on Tuesday, the family of Anderson, L.A. City Council members and others called for LAPD policy changes including restricted Taser use and officers not conducting minor traffic stops. They also urged the release of unedited footage of Anderson’s death and the removal of Police Chief Moore, who is seeking reappointment.

Body camera footage shows Anderson being arrested by the officers, begging for his life while an officer pins him down in the middle of the road and demands Anderson get on his stomach.

An officer then can be heard saying “Stop or I’m going to Tase you,” threatening to use a Taser if Anderson does not get on his stomach. Then as one officer pins Anderson down on the ground with his elbow on Anderson’s throat, another officer uses a Taser on Anderson for an extended period.

Before another officer uses a Taser on Anderson for over around 30 seconds straight, Anderson can again be heard saying that police are “trying to kill me.”

Anderson remained handcuffed in the middle of Venice Boulevard receiving medical assistance before an ambulance arrived and transported him to a local hospital where he died 4.5 hours later. According to the LAPD, Anderson “experienced a medical emergency, did not respond to lifesaving efforts by medical staff and was denounced deceased.”

Among lawmakers outside City Hall was Marqueece Harris-Dawson, who represents the 8th district.

“We have two motions in process in the City Council. One is unarmed mental health responses. The other is alternative to policing in traffic stops,” Harris-Dawson said outside City Hall. “If I run a red light, I shouldn’t be confronted by a government worker with a deadly weapon. There’s just no reason for it.”

“I will not be convinced by anybody that any of those people deserved to have their life taken, least of Keenan Anderson,” Harris-Dawson said. “His students should be able to learn from him. His family should be able to love him. His community should still have him at this moment.”

“If your loved one was going through a mental health crisis right now, what would you do? Call 911?” Hernandez said. “Many of the people in the videos were killed when people called 911 for help. They wanted help. They wanted care. And instead they were met with the system which is built — which is law enforcement, which is guns, which is tasers, which is those rubber bullets.”

“I have watched the video of the moments preceding Keenan Anderson’s death and I want to extend my deepest condolences to his loved ones and everyone affected by this tragedy.

Los Angeles Police Department officers are given significant responsibilities, and the public expects them to exercise their duties in a responsible manner. I will continue to prioritize transparency and accountability during this critical investigation.

We must also lead our community forward on addressing the mental health crisis- a crisis that robs us of friends and family, causing life-altering events with cascading consequences. I am committed to taking action to address this emergency. I have begun having conversations with our county and non-profit partners to look at solution-based ideas that bring more mental health support to the Westside.”