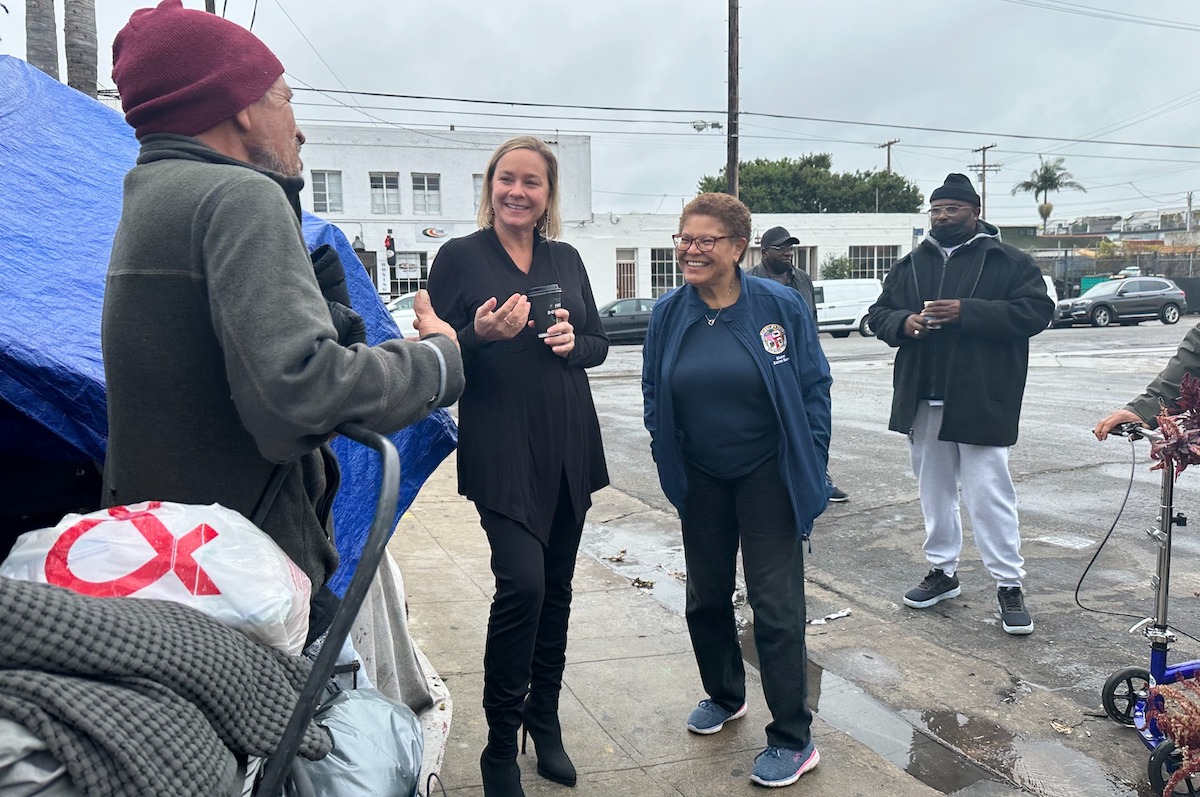 in coming back to the very place her longshot candidacy started some 18 months ago, Councilwoman Traci Park returned to Venice Tuesday evening to update locals on her current progress in conjunction with LA Mayor Karen Bass on the numerous encampments that have been cleaned and cleared much to the delight on Venetians who praised her for a job well done.

Park, who has been in the news in a constructive and positive fashion lately as she has embraced Mayor Karen Bass and her “Inside Safe” initiative to date that has housed over 100 individuals since assuming office on December 12th.

Speaking with clarity and confidence, Park has addressed head-on the only issue that truly matters with most Venetians and that’s decreasing the neighborhood’s street population here in Venice.

To date, major sweeps and evacuations have taken place with relative ease, as we have witnessed at Flower, Hampton and Third to the delight of locals who have endured sub-human conditions that now seemingly are being eliminated in a compassionate fashion.

Park noted that all information regarding CD-11 can be now be easily accessed for all Venetians at www.CouncilDistrict11.LaCity.gov

For Park, who returned to the place where her candidacy started over the issue of homeless encampments and rising crime, took a victory lap of sorts with many in attendance strong supporters of her candidacy as well as most members of the outgoing VNC were active donors and volunteers for her successful, come-from-behind win over fellow attorney and Venetian Erin Darling last November.

Creating a “Better 11” was the catchphrase of the evening as Park stressed advocacy and service in tackling the dual problem of homeless encampments and rising crime that are clearly intertwined with street living inhabitants that has plagued this neighborhood for too long.

Park talked about how Venice needed to emphasize its tourist appeal and she was proud to announce her appointment by the Council President as chairperson of the influential Trade, Travel & Tourism Committee of the LA City Council. In addition, Park will also serve on the Public Safety Committee where she enjoyed enormous financial support from the numerous public safety collective bargaining groups like the LA Police Protective League (LAPPL) that was responsible for hundreds of thousands of dollars in independent campaign expenditures (IE) on behalf of the Park campaign, one of her earliest backers.

Park described her approach to municipal governance as “service driven,” and that outreach with the city’s numerous partners is critical in developing solutions that are permanent.

Park talked about kick-starting the local economy and that overall economic development will be a high priority for Los Angeles moving forward. Park thanked Venice for the “outpouring of gratitude,” and pledged to bringing “service metrics for not-for-profits” who are contracted with the city to manage the issue of homelessness where progress can be evaluated and monitored, a calling card of many of Park’s stump speeches and debates in both the primary and run-off campaigns.

Medina, who served as district director for former Councilman Joe Buscaino will serve in the same capacity with Park. A graduate of UCLA, Medina noted there was an overwhelming number of encampments districtwide, and the primary mission of the council office is to work with the appropriate partners to get individuals off the streets of Venice and LA.

Noting her pride in municipal government service, Medina is entering her 12th year working for the City of Los Angeles and her email is gabriela.medina@LACity.org

Ashley Lozada, also a former staffer of former councilmember Buscaino who served as a field deputy for the Watts neighborhood, will serve in the same capacity here in Venice.

Lozada, who holds a BA and MA in Public Administration worked for Buscaino for five years before moving over to Team Park. Lozada can be reached via e-mail regarding any delivery of city services here in Venice at Ashley.lozada@LACity.orgNick Antonicello is a thirty-year resident of Venice and currently serves on the Oceanfront and Outreach Committees of the Venice Neighborhood Council (www.venicenc.org). Have a take or a tip on all things Venice, contact Antonicello at nantoni@mindsppring.com