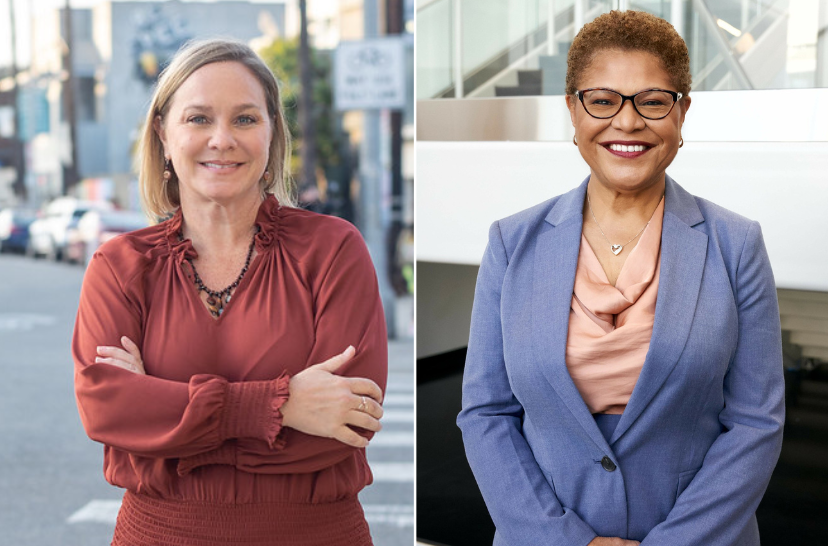 With the election behind us and the politics of governmental progress now the talk of the day, it seems that a former Republican, right-of-center Democrat is now working with LA’s new liberal Mayor in a serious attempt to tackle the issue of encampments in Venice and beyond.

While politics does make for strange bedfellows, it seems LA Councilwoman Traci Park (CD-11) and Los Angeles Mayor Karen Bass (D-LA) are making a concerted effort to tackle the issue of homelessness and get at least for the moment, parts of Venice’s homeless dilemma addressed and cleaned-up.

Outreach has begun to people living in encampments surrounding the A Bridge Home site at the intersection of Sunset Avenue and Pacific Avenue, and people have already accepted housing. Inside Safe is a new, citywide, proactive housing-led strategy to bring people inside from tents and encampments for good, and to prevent encampments from returning.

“I’m proud to be locking arms with Councilwoman Park to change the way we approach homelessness in Los Angeles to bring people inside in a strategic and lasting way,” said Mayor Bass. “Councilwoman Park and I spent yesterday morning conducting outreach with encampment residents and meeting with service providers and local residents about how Inside Safe replaces quick fixes with real solutions. It’s important that the policy solutions developed are informed by the people most directly affected. Through Inside Safe, we will save lives and restore our neighborhoods.”

“During my campaign, I pledged to pursue a comprehensive approach to working with service providers and city leaders to compassionately get encampments like those surrounding the bridge home the support they need,” said Councilwoman Park. “This initiative is to show that the Government can be a place to heal. We don’t just want to say it; we want to show it. Putting people in rooms without the care they need doesn’t work. We need to ensure that they have adequate access to services they need including mental health, trauma, and substance use services for the unhoused.”

This new alliance between Bass and Park comes after a long campaign on different sides of the political equation as Park, a Venice attorney was an early supporter of former councilmember Joe Buscaino for LA Mayor, but he eventually dropped out to support billionaire developer Rick Caruso who spent over $100,000,000 dollars of his own money only to be easily vanquished by Bass by a 55%-45% margin with about one million votes cast.

Buscaino recently accepted a lobbyist position after spending two terms on the city council. Park never officially endorsed anyone in the November runoff, but clearly was more philosophically aligned with Caruso, who became a Democrat just weeks before announcing his plans to succeed Eri Garcetti last spring. Buscaino’s district director is now a member of Park’s staff in the same legislative capacity.

While this is in no-way an “Odd Couple” political partnership of sorts, it speaks to the importance of getting the homeless issue addressed in a meaningful way by these new leaders who have to strip away the notion Los Angeles is governmentally dysfunctional and out-of-touch with average Angelenos and Venetians alike.

This is certainly a good start with hopefully a new beginning to addressing homelessness in a meaningful fashion.

Nick Antonicello  is a thirty-year resident of Venice and currently serves as a member of the Outreach & Oceanfront Walk Committees of the Venice Neighborhood Council. Have a take or a tip? Contact Antonicello at nantoni@mindspring.com