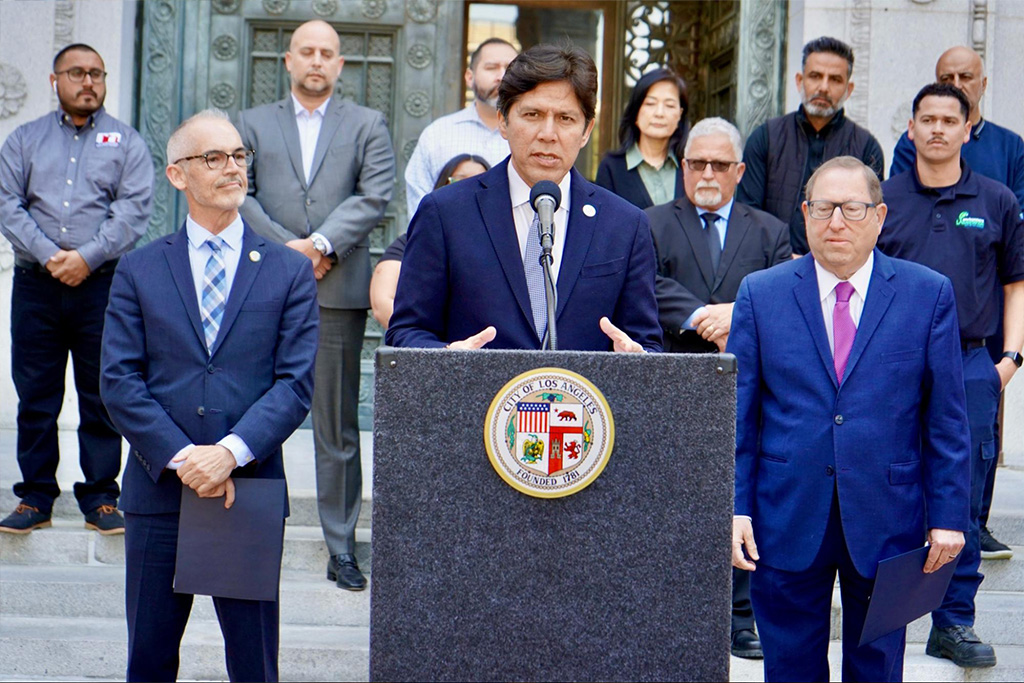 In an interview, de Leon cites needs of “underrepresented” district

Until Wednesday, City Councilmember Kevin de Leon had not said much following the shocking release of the audio tapes where he, former Council President and City Councilmembers Nury Martinez and Gil Cedillo were caught engaging in racist banter and hatching plans to gerrymander the City Council districts of Los Angeles in their favor.

Despite mounting pressure from the citizens of Los Angeles and even President Biden, de Leon went on a public relations defensive to attempt to keep his job. He first went to Univision, one of the city’s largest Spanish-language channels for an interview on Univision Noticias with journalist León Krauze. The second part of de Leon’s apology tour ended for now at CBS News, where he finally issued an apology for some of his actions, yet refused to resign citing the needs of his district, he said, as quoted by CBS News, “It’s about City District 14,” he said. “A district that’s been underrepresented and has gone through much difficulty in the past without political representation… They do deserve political representation.” De Leon said this despite the fact that the people of the district could elect a new city council representative unstained by this scandal.

This is de Leon’s second attempt to retain his position on the council releasing a short statement on October 9 that said, “There were comments made in the context of this meeting that are wholly inappropriate; and I regret appearing to condone and even contribute to certain insensitive comments made about a colleague and his family in private. I’ve reached out to that colleague personally. On that day, I fell short of the expectations we set for our leaders — and I will hold myself to a higher standard.” Nowhere in that statement did Leon apologize for his part in the leaked conversations and, in fact, he joined in by making the comment, “25 Blacks shouting,” and comparing fellow City Councilmember Mike Bonin’s son as an accessory like one of Martinez’s Louis Vuitton bags. In the CBS interview, he referred only to the Louis Vuitton statement, calling it, “flippant.”

Bonin responded within minutes after the interviews aired with a statement on Twitter, that said in part, “Kevin de León cannot be part of the healing as long as he refuses to resign. His stubborn refusal to do what everyone else knows is necessary is deepening the wound he has inflicted on Los Angeles.” Bonin also added, as quoted by NBC Los Angeles, “He made cruel, disparaging, dehumanizing remarks about my son. They’re a hell of a lot more than flippant. He was an active participant in a conversation that was full of blatant anti-Black racism that was a coordinated effort to disenfranchise people. It was a horrible conversation.”

Newly elected City Council President Paul Krekorian also issued a statement responding to de Leon’s interviews within minutes as well. Krekorian said, in a statement released via Twitter, “Apologies will not be nearly enough to undo the damage that this city has suffered. The hateful words that were spoken in that secret meeting have re-opened a deep and painful wound in this city.  People are hurting and demand change. The only way we can begin to heal as a city is for Mr. De León to take responsibility for his actions, accept the consequences, and step down.

“I believe Mr. DeLeon has it in him to be a better person than we heard on that tape, but apologizing is not the same as making amends.  We need to show the world that there is no seat for racism, exclusion and disrespect on the Los Angeles City Council.”

De Leon sent Krekorian a letter asking to be excused from City Council meetings for “in the coming weeks” to focus on “the healing process”. It is possible that de Leon wants to try and avoid confrontations with protesters at those meetings but he may not be able to avoid all protests since the Black Lives Matter Los Angeles has established a 24-hour protest outside of de Leon’s home demanding that City Council meetings and business cannot continue while de Leon is still a Councilmember.

Additionally, the prominent Black developers, R. Donahue Peebles and Victor MacFarlane, who are working on the restoration of the historic Angel’s Flight in Downtown Los Angeles have refused to work with Kevin de Leon in a letter sent to acting City Council President Mitch O’Farrell and posted on the Angel’s Flight website which said, “We are writing to voice our strong concern regarding the conduct, demeanor, and demonstrated racist actions of Council Member Kevin de León. As the developers of Angels Landing, we cannot, in good conscience, go forward and work with Council Member Kevin de León on the Angels Landing project and call for his immediate resignation from the Los Angeles City Council.”

By Yo Venice Staff October 21, 2022
in News
Related Posts