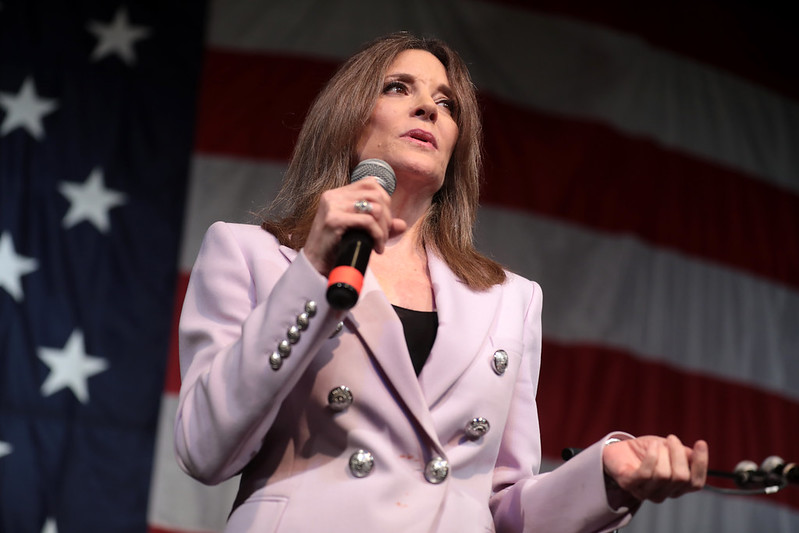 A former candidate for the presidency who is a national best selling author and spiritualist has endorsed tenant advocate and civil rights attorney Erin Darling for LA City Council for the open seat being vacated by the retiring Mike Bonin over his opponent Traci Park, also a lawyer and resident of Venice.

According to WIKIPEDIA, Marianne Deborah Williamson is an American author, spiritual leader, and political activist. She has authored 14 books, including four New York Times number one bestsellers in the “Advice, How To, and Miscellaneous” category.

The founder of Project Angel Food, a volunteer food delivery program that serves home-bound people with HIV/AIDS and other life-threatening illnesses, she is also the co-founder of the Peace Alliance, a nonprofit education and advocacy organization supporting peace-building projects. Williamson has frequently appeared on The Oprah Winfrey Show.

In 2014, Williamson unsuccessfully ran as an independent representing California’s 33rd congressional district in the United States House of Representatives which includes the neighborhood of Venice Beach.

On January 9, 2019, she announced her campaign for the Democratic nomination in the 2020 United States presidential election and suspended her campaign on January 10, 2020. She later endorsed Vermont Senator Bernie Sanders at a rally in Austin, Texas on February 23, 2020.

Williamson was hired as a columnist for Newsweek shortly after the conclusion of the campaign.

Marianne Williamson was born in Houston, Texas, in 1952, the youngest of three children of Samuel “Sam” Williamson, a World War II veteran and immigration lawyer, and Sophie Ann (Kaplan), a homemaker and community volunteer.

Williamson attended Houston ISD’s Bellaire High School, serving as class secretary of the student council. After graduating, she spent two years studying theater and philosophy at Pomona College in Claremont, California, where she was a roommate of eventual film producer Lynda Obst. In 1973, Williamson—an active antiwar protester—dropped out of college and lived what she described “a nomadic existence” during “her wasted decade.”

Williamson became the “spiritual leader” for the Church of Today, a Unity Church in Warren, Michigan, where she had 2,300 congregants and 50,000 television viewers. She booked high-profile musical guests such as Aerosmith’s Steven Tyler, expanded the bookstore, more than tripled declining church membership, increased the congregation’s racial and sexual orientation diversity, brought the church out of mounting debt, and grew the church into one of the country’s biggest Unity churches.

Williamson has authored 13 books. Seven have been on the New York Times bestseller list, with four reaching number one. More than three million copies have been sold.

In 2014 Williamson ran as an Independent for California’s 33rd congressional district in the U.S. House of Representatives. She was praised as a “tireless” campaigner but criticized for not articulating specifics in her plans. Her supporters deemed her lack of plans a strength and said she was not a “made-to-order candidate” who gives “lip service.”

Williamson campaigned on progressive issues such as campaign finance reform, women’s reproductive rights and LGBTQ equality. She raised $2.4 million, of which she personally contributed 25 percent.

Williamson finished fourth out of 18 candidates, with 14,335 votes or 13.2 percent of the vote as Republican Elan Carr finished first in the primary with 21.6 percent of the vote, but lost the general election to the top vote-getting Democrat from the primary, Ted Lieu, now the incumbent who serves on the House Judiciary Committee and is a popular coastal activist and Chair of the Democratic Policy & Communications Committee within the House Majority leadership.

On November 15, 2018, Williamson announced the formation of a presidential exploratory committee in a video in which she said that there was a “miracle in this country in 1776 and we need another one [that would require] a co-creative effort, an effort of love and a gift of love, to our country and hopefully to our world.”

Williamson, who has stated her disbelief in “traditional politics” and thinks that “they must be overridden,” expressed her view that inspiration is underrepresented in political conversation and her thought that the foundations of American democracy were under threat, necessitating a “whole-person politics that speaks to emotions and psychology.”

On January 28, 2019, Williamson officially launched her presidential campaign, in front of 2,000 people in Los Angeles, and appointed Maurice Daniel––who served alongside Donna Brazile in Dick Gephardt’s campaign for the Democratic nomination in 1988––as her national campaign manager, with her campaign committee, “Marianne Williamson for President”, officially filed on February 4th.

Born and bred in Venice and an avid local surfer, Erin Darling attended law school with California Senators Ben Allen and Henry Stern and served as a member of the Venice Neighborhood Council. Married with a three-year old son, Darling has proposed a 5-point plan to end the scourge of street homelessness while offering a detailed platform on climate change which earned him the endorsement of the Sierra Club. The life-long resident played Little League here in Venice as well as baseball and soccer in high school. An advocate for renter’s rights, Darling is a strong supporter of rent stabilization and intends to implement a rapid response, constituent services system that has his office respond to resident calls and e-mails within 48 hours. Darling is the self-described progressive Democrat who is committed to changing and challenging the culture of downtown politics and the bureaucracy that has City Hall hostage.

“We can do so much better,” offered the first-time hopeful.

Nick Antonicello is a longtime Venetian and is covering the race for LA City Council in CD-11. Antonicello has filed more reports, stories and updates on this council race than any other media outlet. Have a take or tip on the race? E-mail Antonicello at nantoni@mindspring.com