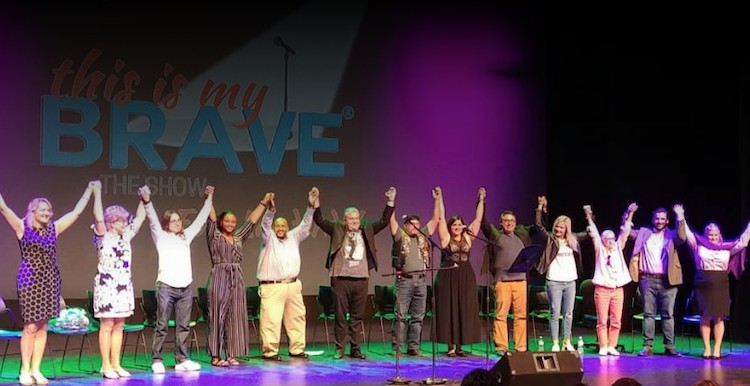 This Is My Brave (TIMB), is a national nonprofit organization dedicated to ending the stigma surrounding mental illness through storytelling and the Los Angeles cast will perform live at the Broad Stage in Santa Monica on Sunday, September 25, 2022. Performances will feature local community members who live with mental health challenges or substance use disorders, telling their stories through spoken word, poetry, music, comedy and more. Those selected for the 2022 Los Angeles show are (in alphabetical order):

Reba Buhr is a professional voice actor in Los Angeles who lives with panic disorder and generalized anxiety. She believes there is nothing more powerful for changing mental health stigma than being open about your own struggles. As an actress, host, and voiceover artist she has worked all over the entertainment industry from theme parks to video games to television. She will be performing a monologue utilizing her voice-acting skills. “I thought I’d do something that combines my love of voice acting and advocating for mental health,” she said. “My performance is intended to show the audience what my panic attacks feel like when I’m going through them.”

Joe Cockrell from Laguna Beach is a communications executive and advocate for LGBTQ mental health. He will perform a monologue entitled October Mourning about his mental health crisis when he “came out” as gay. He was just starting a career as a young journalist when his untreated mental health spiraled into a suicide attempt after reporting about the murder of Matthew Shepard, a gay college student. “It is my hope that by sharing my story, others who are suffering in silence will see that they are not alone,” he said. “Ending the shame and stigma about mental illness is a powerful goal of this show and I am thrilled to be part of it.” You can find him on Twitter at @joecockrell.

Amanda Eldabh is a licensed clinical social worker in Los Angeles who has used her own struggles with various mental health and substance abuse disorders to help others. She has been a therapist for 6 years, working with adults who have severe and chronic mental illnesses, incarcerated juveniles, and other at-risk populations. Prior to that, Amanda volunteered as a peer educator promoting depression awareness and suicide prevention. She found herself immersed in mental health care at the age of 11 after her first diagnosis of major depressive disorder. Amanda is performing poetry that reflects on her mental health journey. “I’m a mental health therapist who has her own plethora of mental illnesses,” she said. “I’ve written a poem about the overall experience with diagnoses and about substance use.”

Kayla Gosnell is a writer, artist, and therapist-in-training at Antioch University in Los Angeles. She studies trauma and is interested in becoming a psychedelic therapist once it’s legalized. She has dealt with anxiety, depression, and PTSD her whole life, and is passionate about using her past experiences to help others heal. She is an avid world traveler, meditator, and aspires to one day write a book about her life. Kayla will be performing a monologue about living with PTSD, anxiety and depression. You can follow her on Instagram: @k_gosnell.

Patrick Jeffries is a support counselor from Glendale who will be performing a unique style of rap poetry about living with manic depressive disorder. “One of my greatest hopes is that through my performance of my poem Extraordinary Madness, I encourage other folks to own their story,” he said. “It’s my intention to represent and encourage others to own their recovery stories in however they express it and transcend their story through self-actualization.”

Alegra Kastens is a Licensed Marriage & Family Therapist (LMFT) and founder of the Center for OCD, Anxiety, and Eating Disorders. She will be performing a monologue about her experiences with obsessive-compulsive disorder (OCD). Fueled by her own lived experience with OCD and eating disorders, education and advocacy are at the forefront of Alegra’s career. She writes for Psychology Today, VeryWell Mind, and other publications, and is a content creator for her successful Instagram advocacy platform @ObsessivelyEverAfter. For more information about Alegra and her work, visit www.alegrakastens.com.

J.D. McGibney is a guitarist in Los Angeles with the mission to fight the stigma around mental illness through music, and by openly sharing his experiences about living with anxiety. He is currently partnered with the You Rock Foundation, using music as a backdrop to help those struggling with their mental health. His band, Angels on the Battlefield, conveys a message of empowerment through epic instrumental metal, and is currently working on several avenues to raise funds for charity. JD also hosts the Conquer Your Battlefield Podcast, where he invites his guests to participate in open conversations sharing their experiences overcoming personal struggles with mental health. J.D. be performing an original song. “I wanted to push myself a little outside of my comfort zone and try something new,” he said. “Through my performance I share what I’ve gone through, what I’ve learned, and how music helped me get through a lot of it.”

Halo (Hannah Richards) is a professional voice actor and musician from Burbank Hills who will be signing in the show. “I’m performing an original song that I wrote during the lockdown in a real extreme loneliness period of my life,” she said. “I feel like writing music was the best kind of therapy to get some perspective and find healthier coping mechanisms.”

Naeem Veera is a high school student from Rancho Palos Verdes who is in recovery from substance abuse disorder and lives with depression. He will be performing original poetry that speaks to his experiences. “I wanted to break  the cycle of where I was at. Poetry is something that I’m passionate about and being part of this show allows me to share it with others,” he said.

Jerry Quickley is a professional musician, poet, librettist and playwright in Los Angeles. He also makes dance music through collaborations with Phillip Glass, and he has worked with a variety of other artists. Jerry has taught at Stanford, Dartmouth and Columbia. His work has been commissioned by The Public Theatre NYC, National Theatre UK, Amsterdam Dance Event, The Mark Taper Forum, and The Art Institute in Helsinki. He will be performing original rap poetry about being the survivor of a suicide loss. You can find him on Twitter at @jerryquickley.

“We are very excited about this cast of performers. This Is My Brave is a show about what it’s like to live through mental illness and addiction and come out on the other side,” said the show’s co-producer Karen Pickett, LMFT. “The emotions from having experienced such challenges first- hand are raw, excruciating, thrilling, inspiring and so much more.”

This Is My Brave was co-founded in Virginia by Jennifer Marshall and Anne Marie Ames (1958- 2017), two women passionate about ending the stigma surrounding mental illness, and saving lives through storytelling. In May of 2014, TIMB debuted its first ever live show in Arlington, Virginia at the Spectrum Theatre to a sold-out crowd of nearly 400. Over the past eight years, the nonprofit organization has hosted performances across the United States and in Australia, including two previous show in Los Angeles.

“One in five American adults face mental health issues, yet the topic continues to carry shame. This Is My Brave aims to end this stigma and silence by celebrating the stories of real people living successful lives with mental health challenges and in recovery from addiction,” said co-producer John Tsilimparis, LMFT. “This is going to be a powerful show where real people from our community put their names and faces to their own stories of recovery. By bringing these issues into public conversation, they provide a sense of hope for others.”

For more information about This Is My Brave and to purchase tickets, visit www.ThisIsMyBrave.org. If a reasonable accommodation of disability is needed, please contact timblosangeles@thisismybrave.org