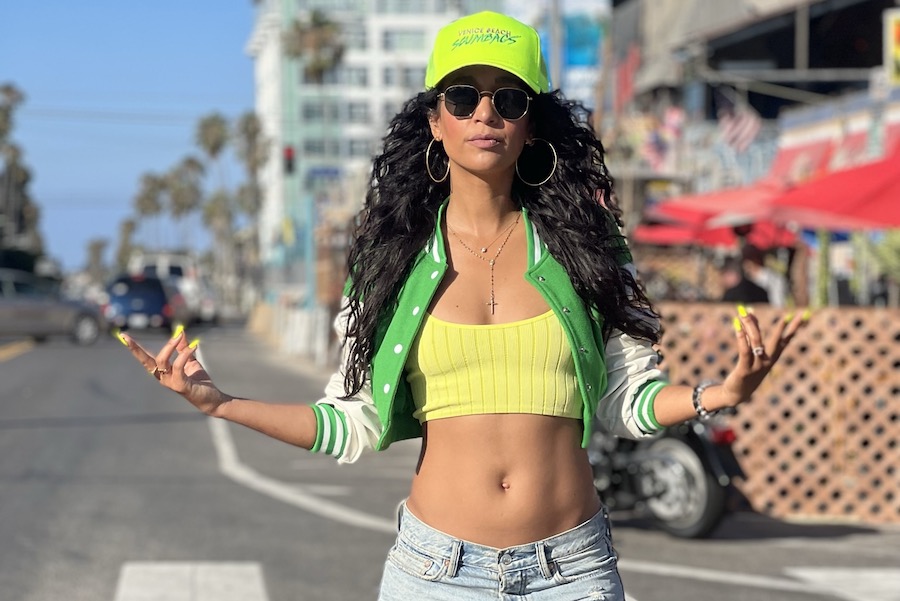 Archer’s complex grief journey forced her to write a TV show about the scumbags of Venice Beach, demonstrating why some good people do the wrong things for the right reasons…

For Aleksei Archer, offering a woman’s perspective on the edgy  underworld that is her latest project Venice Beach Scumbags, is a work  from the heart and a tribute to father, Jeremy, who she lost to  depression and ultimately suicide.

I met her several weeks ago at the Venice Farmer’s Market as she  drove a cool neon green golf cart that promotes her brand, a TV show  and clothing brand.

It was obvious to me she had something serious to say.

Aleksei Archer, a working actress and activist has centered her latest  work around a project so personal that it reflects her nonconformist  persona who would rather “beg for forgiveness than ask for  permission.”

Like so many Venetians, this former New Yorker and also an operatic  trained singer is preparing to pitch the project to willing partners.

For now, the decade long resident including 8 years as a beachfront  occupant is prepping to sell the concept to streamers to launch the  show and further enhance her brand.

More than just a television pilot, Archer is promoting her point-of view while growing an ever-increasing local and loyal fan base and  bringing awareness to mental illness.

“We’re shopping the show, the goal is to have a hit to broaden my  reach and passions,” offered Archer.

Archer believes “Venice Beach Scumbags” is as timely as living in  Venice today in that it offers a young woman’s perspective of the  change we see in Venice at so many levels, each and every day.

“I love Venice. I like the change. Despite it all, I feel safe here.”

The youthful and edgy actress, who recently co-starred with Anne  Heche in “The Vanished”, which was top 10 on Netflix. It’s about child  abduction, personal redemption and grief and serves as another  example of taking on roles that reflect real time issues within our  community and culture. In that film, Archer is sultry and seductive  and enjoyed working with Heche, who has had a long career in  Hollywood in such major hits like “Donnie Brasco.”

In many ways Archer’s personal journey is weaved in grief, recovery  and letting go.

Her Dad, who she lost on April 26th of 2017 is complicated not only by  taking his own life, but his personal battle with depression that she  was not aware until his funeral.

The pilot presentation which serves as a proof of concept took seven  days to shoot and she raised $126,000 to get Venice Beach Scumbags  off the ground with most of the locations shot here in popular settings  in Dogtown.

“My father was my idol, my best friend,” noted Archer who has a  mother and two brothers back east.

Her character in the show is forced into the underbelly of drugs as this  king pin of sorts, but sees the lead as less aware version of herself, and  a personality in need if development.

Healing and suicide loss are recurring themes as Archer continues to  recover personally through this professional endeavor so close to her  heart.

When asked how she was doing, she was blunt and to the point.

“I’m good. While previously in a toxic relationship, the timing of the  pandemic was hard but I have found aspects of joy in this new world.  Focusing on creating my own projects was one of them.”

Relying on yoga, working out, making new friends and working  professionally again all have been personally therapeutic as she is currently starring in a national commercial for Verizon.

And living at her oceanfront walk apartment has lent perspective to  her journey.

And as a suicide loss survivor, moving forward and moving on is what  helps deal with what she describes as “complex grief.”

Archer started a charity called Mourning Glory two years ago to raise  awareness of suicide loss where she provides free mental health care to  survivors and has a docu-series in the works about the benefits of  group therapy.

“I’m excited by the prospects of my shows and I’m optimistic the  projects will change the world and the stigma associated with suicide  loss,” said Archer as she spoke fondly of her puppies and the direction  of her empire as well as her life here in Venice.

“I’m creating a brand and opening doors all at the same time. My  professional success is a catharsis in my personal healing and that’s a  beautiful thing. I want to use art to help my community of survivors  and my community here in Venice.”

If you or someone you know is struggling from suicidal thoughts, call  the National Suicide Prevention Lifeline by dialing 988.

Nick Antonicello is a longtime Venetian who writes about politics,  community culture and the impact on Venice. He can be reached via  e-mail at nantoni@mindspring.com