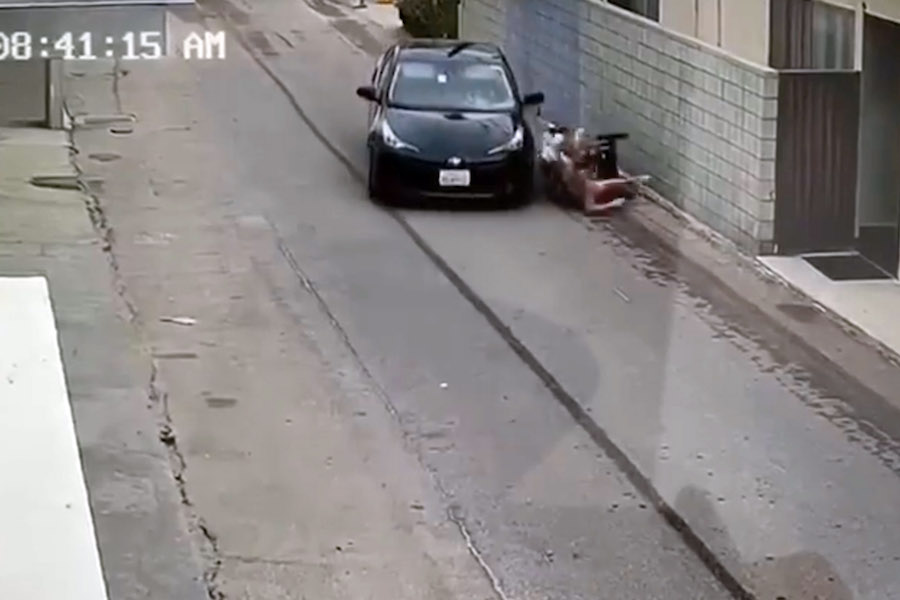 A woman from Venice who was hit by a teenage driver under the influence is angered by the sentence that the young driver received for the crime as reported by ABC.com. The woman, who asked to be identified only by her first name, was hit by the teenage driver from Palmdale while walking with her child’s stroller and the incident was captured on video.

The 16-year-old resident of Palmdale was driving a rental car without a license, while under the influence and on probation for a previous incident who then attempted to flee the scene. The victim, Rachel, said, as quoted by ABC 7.com “He hit us. He had no intention of stopping. He did slow down after he hit us and I believe that’s because he saw the oncoming truck that ended up ramming him into the telephone pole.”

The video showed the car striking the woman and the stroller with her eight-month-old child in August of 2021.

Rachel said, as quoted by ABC 7.com, “I’d like to believe that somebody… that I don’t know wouldn’t just try to intentionally kill me and my child, but once I learned on Sunday that the kid had a prior felony charge for poisoning a girl in his high school, there’s just no doubt. The mental toll on me is just, it’s really hard to wrap your head around somebody just trying to kill you.”

She believes that the incident wasn’t an accident and according to her, the teen was tested for drugs on the spot and the test revealed that the teen had marijuana and Xanax in his system.

Rachel’s injuries were a laceration to her back and she had the need for stitches on her right elbow to close a wound. Her child had a tire mark on his head and did not suffer a more serious injury but was subject to day and night terrors for a couple of months after the crash.

Los Angeles County District Attorney George Gascón’s office charged the driver, who is still a minor, with one count of felony leaving the scene and two counts of felony assault. The 17-year-old was convicted and sentenced to five to seven months in a juvenile probation camp.

The victim had supported Gascón in the election and voted for him, but now backs the attempt to recall Gascón because of her feelings about how Gascón prosecuted the case. In her opinion, the punishment for the teenager’s crime is “laughable”.

Rachel said, as quoted by ABC 7.com, “I think everybody can agree that we need to reform the system in a big way, but, I don’t understand why there can’t be law and order and reform at the same time. Why does it have to be one or the other?”

The office of the Los Angeles County District Attorney Gascón responded to this allegation on Twitter and said that misinformation has circulated about the incident and that there’s no evidence of “attempted murder.”

Gascon’s official Twitter account said, as quoted by ABC 7.com, “Unfortunately, opponents are attempting to capitalize on this incident & are using the victim to advance the false premise that this sentencing is tied to the DA’s criminal reform policies. The truth is our office simply followed California law.”

Rachel told Eyewitness News ABC 7.com that because of what happened and her feelings that justice was not served along with her feeling that she is no longer safe, she and her family will move out of Los Angeles county.

The office of the LA County District Attorney Gascón told ABC 7.com that they are aware that this will affect Rachel for the rest of her life along with her family and that Victim Services has reached out to offer assistance.