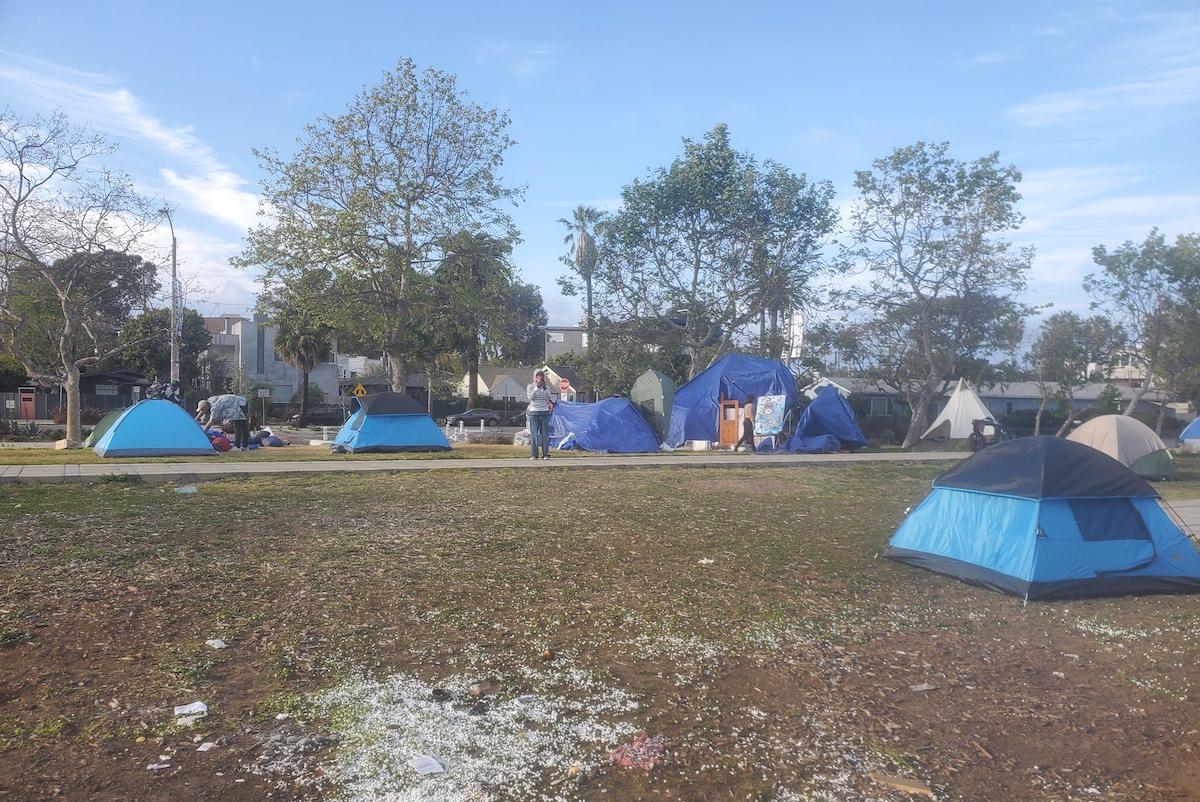 41 of 66 residents moved to interim housing

City officials have cleared a homeless encampment at Centennial Park in Venice.

The Santa Monica Daily Press estimated that there were up to 60 tents on the site, located on the Venice Boulevard median near the Abbot Kinney Memorial Library. The Library is currently closed for repairs, according to the City of Los Angeles.

The city made a concentrated effort to perform outreach among the residents of the camp and in the end, all of the unhoused people there accepted the temporary housing arrangements that were offered to them or left by the deadline of June 13 at the end of the day.

Mayor Eric Garcetti’s office chose St. Joseph’s Center to take charge of the outreach effort. St. Joseph’s is an unhoused services provider whose workers have been making contact with the residents of the camp since November of 2021 to facilitate efforts to help them.

According to Garcetti’s Press Secretary Harrison Wollman outreach began in March of this year.

Out of the 66 park residents, according to information from St. Joseph’s Center’s outreach, 41 of the residents accepted the interim housing that was offered to them. Among those 41 placements, 33 were placed in motels, six went to Project Roomkey slots, one was a bridge home placement and one was placed in shared housing.

LA City Sanitation had scheduled a park cleaning on June 14 from 7:00 a.m. to 4:00 p.m. City Sanitation delivered notices by hand to the residents and the notices were posted at the park. The Los Angeles Homeless Services Authority, Department of Parks and the LAPD were also part of this park cleaning.

“I am pleasantly surprised that action is being taken, Linda Martinek, President of Friends of the Venice Library, a nonprofit organization that fundraises to support library programming, said told the Daily Press. “I hope that they’re getting the support that they needed and that it won’t just be moved to another area of town, the encampment, but also I hope that they stay on top of it and don’t let it happen again.”

Martinek’s group had previously canceled all of their in-person events at the library due to their concerns about potential safety issues at the library. It was Martinek’s belief that the library had endured a notable amount of staff turnover and the hours of the library were not as reliable as normal because of staff who requested to transfer out to other library locations due to what she termed as verbal and physical assaults by the people living in the park.

Over the past few months, the area has also seen a shooting and tent fire, which fortunately did not spread to the library.