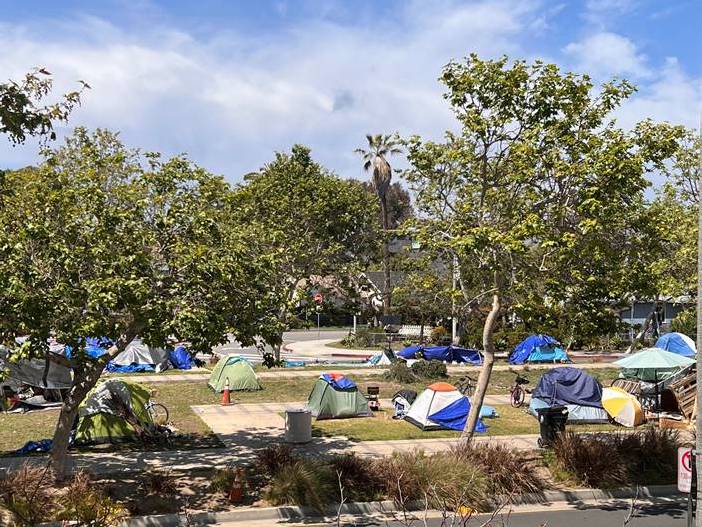 Drug deals, theft of property, fighting, fires and stationary RV’s are destroying this residential neighborhood and nobody is doing anything about it. Resident remains anonymous, but tells her story that is both “bad and scary.”

Like many in Venice this story is sadly becoming the rule versus the exception if you reside by the Library and specifically Centennial Park.

A place where overnight camping is illegal, yet these third-world conditions continue to exist and the question is why?

An individual who works in entertainment, came to Dog Town from New York City and has watched this neighborhood deteriorate before her eyes!

With a room and a view, she can watch drug transactions from a space she barely uses any longer on a daily basis.

She sees the ugly side of a story too gross to observe as she retreats to other places in her apartment and has to wear headphones to block out the shouting and the overall ugliness of having to live across from what has become a ghetto of crime, drug abuse and becoming a virtual hostage in her own apartment.

Can you imagine having to work from home under these horrifying conditions?

For e-mails to Councilman Mike Bonin, law enforcement, the fire department and alike go unanswered and unresolved and thus is hesitant of going public for fear of some retribution by the transient thugs who now control her street.

But I will tell her story.

She sees the faces of young girls who have become disheveled, dirty and bruised by the hard living that is the streets of Venice and in particular tent living at Centennial Park.

Human feces is all over the sidewalk and property, an everyday occurrence.

Calls for help, and nothing happens.

Open drug dealing right in front of her window.

For the Windward faces South Venice Boulevard, a ringside seat for the circus and criminal activity that takes place each and everyday since the original ascension of tents in late October to the literally hundreds of tents, encampments and stationary RV’s that now populate the curbs as flood lights are now operating in the evening and there seems to be a security camera installed on a wooden pole too!

Personal items such as outdoor furniture and alike have been robbed from decks and lawns and can be seen within the encampment.

Videos have been sent to Crime Stopper’s as well as LASD according to the resident, but nothing has changed.

When asked about the make-up of those camping they were described as 50% men and 50% women with an average age of about 30 and drug use is steady, rampant and obvious.

“I am moving out when my lease expires,” offered the tenant with a sense of sadness and relief.

“I was excited to live here.”

Things really got out of control by late December when camp started to swell followed by a rash of RV’s that remain and where much of the drug activity originates.

She stated as a single individual she is scared and is hesitant to invite friends over because of the current criminal conditions.

She even recollected when she was walking her dog on Super Bowl Sunday and a crazed transient waved a knife at her at the Venice Canals of all places!

It seems the criminal activity is metastasizing like a cancer, and the government helpless to do anything, like solve this mess they created in first place!

For how many stories like this are typical, but too afraid to say anything?

What has to happen or occur to change things like this sad state of affairs?

This is a true story, not a fictional horror story.

This is what is occurring and things are getting worse by the moment.

Is there help from anyone or anything?

We need law enforcement to assist this individual.

This all has to end now.

The author is a member of the Outreach and Oceanfront Committees of the Venice Neighborhood Council. To help this woman, e-mail me at nantoni@mindspring.com or call (310) 621-3775.