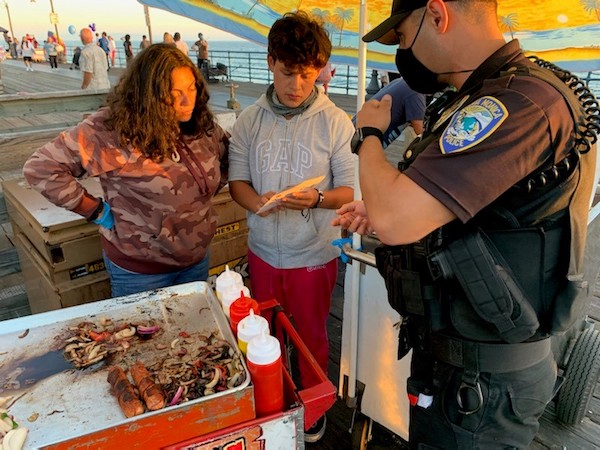 By Dolores Quintana and Sam Catanzaro

Santa Monica City Council is looking at ways to regulate unlicensed food vendors on and around the Pier over an array of concerns including dumping waste on the beach, selling food not up to health code, blocking fire lanes and using unregulated combustible fuels.

Since the passage of S.B. 946 in 2018 that decriminalized street vending as a whole, Santa Monica city employees and LA County employees have been working to control the unpermitted vending and the hazards and environmental problems that they say come with it. SB 946 was passed to give street vendors a path to legal vending but has proved problematic in practice since many cities permitting processes are prohibitively expensive and the equipment standards that are scaled towards larger vendors and are again, too expensive for most street vendors as revealed by a report issued by Public Counsel.org.

In Santa Monica, dozens of unpermitted vendors, especially on the weekends, come to the pier to sell food and cause issues by using unregulated combustible fuels, selling food that is not compliant with health codes, dumping waste by the beach and blocking the fire lanes onto the Pier. In a response to these problems, Santa Monica City Council has passed new ordinances to further regulate street vending and has called in additional staff to deal with the issues. During the Dec. 7 City Council meeting, Councilmember Lane Negrete said “me and my colleagues are addressing public safety, environmental advocacy and human rights. This issue isn’t about illegal vending, it’s about our community values, putting our foot down when enough is enough and now is that time.”

At the December 7 meeting Council, in a unanimous vote, directed staff to “develop a comprehensive assessment regarding the continued challenges with unpermitted vending activity on and around the Santa Monica Pier.” Lawmakers specified that the report should address ways to “protect public health and safety while promoting Pier businesses and the visitor experience.” City Council will take further action on the assessment no later than February 22.

“We need it to stop,” said Mayor Sue Himmelrich. “I think a bunch of us have been down and witnessed the chaos that ensued, and I think we understand that this has created an emergency for us.”

The City currently has assigned up to 45 city employees to handle the street vendor traffic on the weekends, which are the busiest days. This includes three code enforcement officers who are there to work to induce compliance to local ordinances through education, 10 to 15 Public Works employees who clean up improperly disposed refuse from vendors, two SMPD fire inspectors inspect and seize, if necessary, fuels that are not permitted for use and six to ten SMPD officers who are there to enforce ordinances and deal with disputes. The city has hired additional security personnel from Allied Security to keep vendors off of the wooden pier. Anywhere from once or twice a month, LA County sends six to eight public health inspectors who monitor the vendors for any possible health code violations.

The City Council has made it clear that they intend to protect and enforce their city codes with all vendors who seek to sell their food around the Santa Monica Pier, but they seem to be frustrated with the amount of effort that they need to put into that effort. As it stands, there are only 13 available vendor permits allowed on the Pier and all other vendors are required to stay 100 feet from the Pier as stated in the City’s vending ordinance.

The Santa Monica City Council passed new ordinances on August 24 that banned the dumping of merchant trash in public trash containers and liquid wastes in any public area as well as unpermitted use of fuel by street vendors. This gave the SMPD officers the ability to enforce the ordinances with the threat of citations or arrest.

“The biggest change is the ability to legally get involved in these issues and support both code and fire, which we weren’t able to really do before. I think it was a frustration on their part that they had a mission to do, but then PD was legally handcuffed to anything, and so the ordinance opened that,” SMPD Lt. Bobby Villegas told the Santa Monica Daily Press

Vendors are given three opportunities to comply, first the staff can educate, then go to the advisable level, and, as a last resort, use of citations or arrest as the final steps. The focus of these efforts has been concentrated on protecting the pier and keeping emergency lanes and escape routes open for emergency services and visitors to the pier. This means that their efforts have placed environmental issues like the dumping of trash and other kinds of waste as a secondary concern.

The Public Works Department has had to hire another staff member who is specifically assigned to the 1550 Lot that is the site where many vendor carts do business. This staff member can fill between 12 and 16 giant trash bags daily on the weekends, according to the City.

It is the responsibility of Public Works to handle clean up of the area and they do that right down to picking corn kernels out of the sand since their automated tool isn’t able to remove items that are that small.

“Our staff care very much down to that level of the kernel of the corn and we would support any effort to make the situation better for the community and the planet. Without enforcement, we are just not likely to resolve these issues in any simple way, so I would support more enforcement of ordinances as a way to curtail some of the damage that’s being done to our public spaces,” Public Works Chief Operations Officer Peter James told the Daily Press.

But these efforts have done little to control the issues described in a letter read at the December 7 meeting on behalf of 33 permitted pier businesses who did not reveal their names out of fears of intimidation by the unpermitted vendors.

“Each week they experience more brazen action as the unpermitted vendors have only gotten more aggressive and continue to grow in numbers,” the letter reads, describing a “growing wall of illegal vendors” on the weekends blocking access to their businesses.

While more concrete steps to tackle the issue will likely come out of the staff report, some action may come sooner.

“We are not waiting for a report,” said Councilmember Phil Brock, as quoted by the Santa Monica Lookout. “We are going to be working to take positive steps to solve the issue.”

Shawn Laval Smith considered armed and dangerous, police say By Sam Catanzaro Police have identified a man wanted for the...

Shawn Laval Smith considered armed and dangerous, police say By Sam Catanzaro Police have identified a man wanted for the...