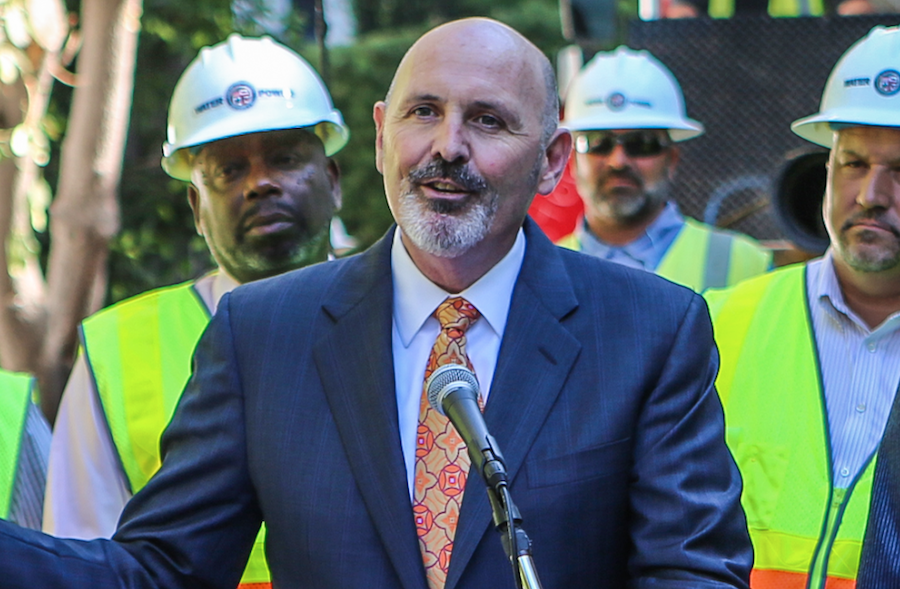 The former general manager of the Los Angeles Department of Water and Power (LADWP) has agreed to plead guilty to a federal criminal charge for accepting bribes from a lawyer in exchange for his official action to secure a three-year, $30 million no-bid LADWP contract for the lawyer’s company, the Justice Department announced this week.

him with bribery, a crime that carries a statutory maximum sentence of 10 years in federal prison. In the plea agreement, Wright also admitted he participated in several other corrupt schemes while the head of LADWP.

The information and Wright’s plea agreement were filed this week in United States District Court. Wright is expected to make his initial appearance in this case on December 10.

According to his plea agreement, Wright served as LADWP’s general manager from September 2016 until July 2019, when he resigned at the direction of the mayor of Los Angeles. In this role, Wright was the chief executive of the largest municipal utility in the United States.

During 2016 and 2017, Wright developed a relationship with Paul O. Paradis, 58, of Scottsdale, Arizona, a lawyer appointed by the Los Angeles City Attorney’s Office to represent LADWP in a lawsuit in which the department blamed the vendor of its billing system for the misbilling of hundreds of thousands of ratepayers. Paradis and his New York-based law firm also held a $6 million LADWP contract to provide project management services in connection with the department’s remediation of the faulty billing system.

Paradis has agreed to plead guilty to a bribery charge for accepting an illicit kickback of nearly $2.2 million for getting another attorney to purportedly represent his ratepayer client in a collusive lawsuit against LADWP related to the billing debacle. Paradis is cooperating with the ongoing investigation into the collusive litigation and corruption at LADWP. Paradis is expected to make his initial court appearance on December 16.

By early 2017, Wright and Paradis agreed that — in exchange for Wright’s support of a “no-bid” $30 million contract for Paradis’s downtown Los Angeles-based company Aventador Utility Services LLC — Paradis would give Wright a million-dollar-per-year job as Aventador’s CEO and a luxury company car once Wright retired from LADWP.

In exchange, Wright lobbied members of the LADWP board of directors to persuade them to vote in favor of the contract for Aventador, whose company name was taken from a model of Lamborghini sports car. He also drafted a letter to the LADWP board touting the purpose of the contract and the company’s capabilities and explaining why the contract had to be granted on a no-bid basis, rather than allowing competitive bids from other companies. Wright enlisted the help of LADWP employees, including other senior executives, to support the Aventador contract, and he prepared an oral and written presentation to the LADWP board urging the contract’s approval.

In his public presentation to the LADWP board, Wright cited to a report from a court-appointed independent monitor overseeing the ratepayer settlement and warned that LADWP could not meet its court-ordered obligations unless it contracted with Aventador. Wright did not inform the LADWP board that the independent monitor’s report had been secretly ghostwritten by Paradis, a fact that Wright knew because he had planned it with Paradis.

At the time it approved the $30 million no-bid contract in June 2017, the LADWP board was also not informed of Wright’s agreement with Paradis to take a lucrative job as Aventador’s CEO upon retiring from LADWP.

After the awarding of the contract, through early 2019, Wright continued to collaborate with Paradis to build and market Aventador and to seek additional lucrative business opportunities for it — and thus for Wright and Paradis — both inside and outside LADWP. For example, Wright directed Paradis to draft an LADWP settlement agreement in a way that would create future business opportunities for the company. Wright also told Paradis that they should do “the minimal possible” with respect to the LADWP billing system upgrade so that the project would not need to occupy Wright’s attention during his remaining tenure. Beyond LADWP, Wright used his position as LADWP’s general manager to advertise Aventador’s services at industry events and in meetings and discussions with other industry officials and executives.

By March 2019, Paradis had been forced to resign from his role as special counsel to the City Attorney’s Office. Around this time, the LADWP board voted to terminate Aventador’s contract, but agreed to retain the company’s services if Paradis sold his stake in the company and disavowed any interest in the company, which Paradis purported to do. In late March 2019, after Paradis sold the company to an employee, Aventador officially changed its name to Ardent Cyber Solutions LLC.

In late March 2019, after Paradis had begun covertly cooperating with the FBI, Wright met with Paradis at Wright’s home and directed Paradis to destroy their incriminating text messages and emails from Wright’s cell phone and Apple iCloud account, and to take back an Aventador laptop and wipe it clean. Wright told Paradis that he had already gone through his office at LADWP and destroyed all incriminating physical evidence.

At this meeting, Wright also told Paradis that he still wanted to continue their secret plans, stating that he felt that his future had been “resurrected” by the opportunity to further their corrupt scheme. Wright cautioned that they would need to create a new company, which they referred to as “Newco,” to replace Aventador and its successor Ardent, because those companies were tarnished because of bad publicity. The two men continued to contact and meet one another in private. Due to Wright’s fears that their corrupt communications would be detected, they orchestrated a clandestine dead-drop maneuver for Paradis to deliver Wright’s wiped cell phone and a “burner” cell phone for Wright’s use so that they could communicate in secret.

In April 2019, Wright used his position to urge the LADWP board to support the award of a new cybersecurity contract to Ardent for more than $10 million. Wright again did not inform the board of his secret arrangement with Paradis, which by then included their agreement that Wright would receive a “substantial sign-on bonus” of $600,000 or $1.2 million, as well as an increase in his ownership of their company, in addition to a previously agreed-to $1 million annual salary and luxury car.

In May 2019, Wright suggested to Paradis that he remain in his role as LADWP general manager for a few more months so he could help ensure that Ardent secured yet another contract from the department. Understanding that he could not legally receive payment from Ardent while he was still employed by LADWP, Wright suggested that he could secretly begin working for Ardent before his retirement and then later be compensated by “some retroactive money” for those services. In proposing this illicit payment arrangement, Wright referred to Paradis as his “ATM.”

Wright admitted in his plea agreement that he deprived LADWP and its ratepayers of their right to his honest services and violated the fiduciary duty that he, as general manager, owed to LADWP and its ratepayers. Wright further admitted that he lied to federal investigators in June 2019 when he told them that he did not have any financial or business interest – including future interests – in any company in which Paradis was associated. Wright also admitted that he destroyed evidence with the intent to obstruct the federal investigation.

By Yo Venice Staff December 9, 2021
in Crime, News
Related Posts