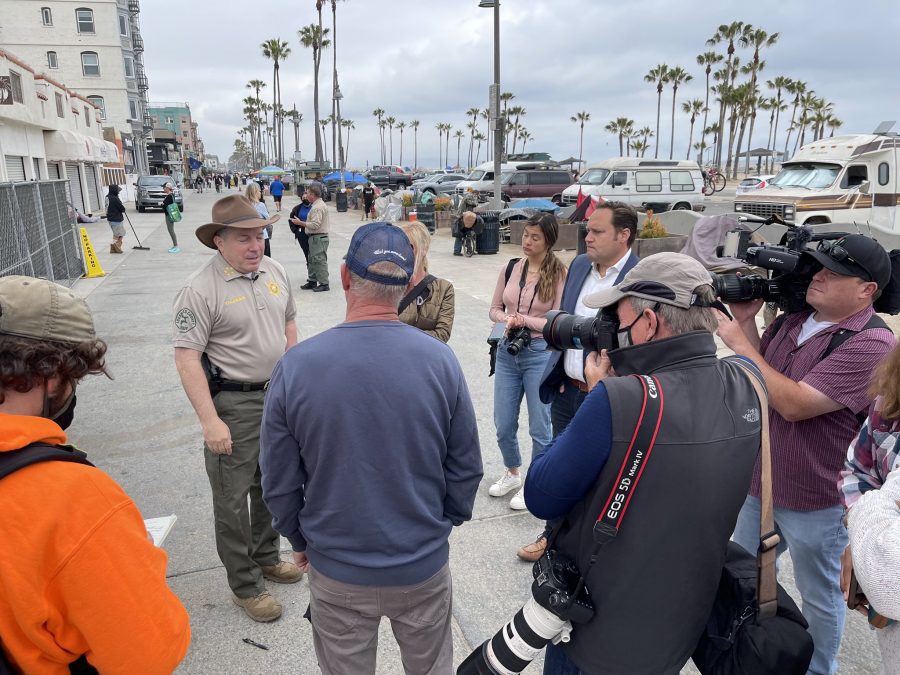 For that seems to be the case when it comes to the incessant bashing of the LA County Sheriff Alex Villanueva by Councilman Mike Bonin, who doesn’t seems to get along with others who don’t agree with his failed and flawed policies as it relates to the issue encampments at the beach.

While it is clear some encampments here at Venice Beach have been moved and in other people’s opinion simply rearranged, the question is why now and not a year, two years or three years ago?

Enter LA County Sheriff Alex Villanueva, with all the trappings and power of his office that in just a few weeks has forced CD-11 Councilman Mike Bonin to start earning his $300,000 plus income as one of the highest paid council members in the United States!

There is a new sheriff in town indeed.

While every possible excuse was given to not stop the proliferation of encampments within Venice and specifically the boardwalk, Sheriff Villanueva’s decision to come to the protection of locals and Venetians has forced Bonin to finally take action that benefits his constituents, and not outside agitators, service providers and transients who do not belong.

As service providers are claiming they have been working for months on the issue at hand, is that really the case or is it the cloud of a second recall attempt that is really shaping the thinking of Councilman Bonin?

For Bonin seems more interested in a very public feud with Sheriff Villanueva then an actual policy of consensus and cooperation with an individual who represents the entire county of some 10 million people where Bonin only represents some 300,000 people.

For if the beaches and parks belong to all of us, doesn’t Sheriff Villanueva have as much standing on the issue of encampments since this is now clearly a public safety concern?

For if 50% of all crime-issues are homeless related in Venice, should an elected law enforcement official who can patrol the beaches have a role in what has happened here in Venice?

For there seems to be a point of politics and progressivism that Mike Bonin is far more concerned about then the public safety concerns that should be above the partisan shenanigans of our council member yet again under the threat of another recall.

Law enforcement officers must be able to call balls and strikes, and not get “knee-deep” in the politics and partisan practices of Mr. Bonin and his supporters hell bent on removing any public safety oversight when in fact those at the beach illegally encamped are in fact violating the law, thus the Sheriff’s presence is not only reasonable, but necessary.

But most importantly, because the Sheriff’s Office is outside the scope of influence of the LA City Council, Villanueva’s presence is truly independent of any undue influences that can be applied to LAPD and I believe that is truly the bone of contention as to why Bonin is so opposed to the Sheriff’s presence in solving this massive issue of homeless encampments at the beach and other public spaces.

It is mindboggling to see a city council member reject the honest intentions of the Sheriff to assist him fix something he has had nearly nine years to solve. A problem that has gotten far worse; and not better on his watch!

For the message is clear, people want the beaches cleared and commerce back at the boardwalk.

That isn’t just good policy, but good politics as well for the community at-large.

The author is a member of the Outreach, Parking & Oceanfront Walk Committees of the Venice Neighborhood Council (www.venicenc.org) and can be reached at (310) 621-3775 or via e-mail at nantoni@mindspring.com

By Yo! Venice Contributor July 21, 2021
in Opinion
Related Posts