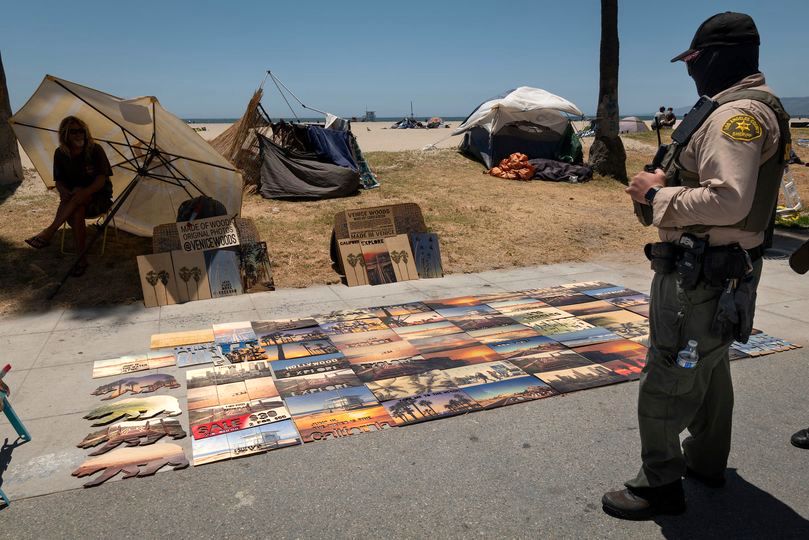 Sheriff sends letter to Board of Supervisors this week

“Venice was once the number two tourist destination in Southern California, second only to Disneyland. The economic hardships our local business owners and residents are facing is unacceptable,” wrote Los Angeles County Sheriff Alex Villanueva in a letter asking the Board of Supervisors to declare a state of emergency on the region’s homelessness crisis.

On June 23, Villanueva sent the letter–titled “Local State of Emergency Regarding the Homelessness Crisis”– to the County of Los Angeles Board of Supervisors.

“Since taking office, I have watched the state, county, and local government fail to address the homelessness crisis affecting the residents of Los Angeles County (County). Despite spending in excess of $6.5 billion over the last ten years to address the issue, and the creation and efforts of the Los Angeles Services Authority (LAHSA), nothing has changed,” began the letter. “Residents and business owners should not be subjected to walking around piles of trash and human feces in their neighborhoods, businesses, parks, and communities.”

Villanueva argued that the state of homelessness in the county is not only causing residents to leave, but also impacting tourism.

“Venice Beach, Olvera Street, and Hollywood are currently under siege. The homeless situation and lawlessness citizens are experiencing is keeping tourists from coming to Los Angeles County. Venice was once the number two tourist destination in Southern California, second only to Disneyland. The economic hardships our local business owners and residents are facing is unacceptable,” Villanueva, who has stated a goal to clear the Venice Boardwalk by July 4, wrote in the letter.

“Fires from homeless encampments are threatening our local residents who live within mountainous areas. On a daily basis, fires are started by the transient population taking refuge in the wilderness. With the current doubt California is experiencing, resources are desperately needed to prevent a catastrophic event in these communities,” Villanueva wrote.

In asking the Board of Supervisors to declare a state of local emergency, Villanueva advised tapping into all available state and federal funding to address the crisis, including assistance from the Federal Emergency Management Agency. In addition, he requested emergency funding to the LASD Homeless Outreach Service Team (HOST), whose officers are currently engaging with the homeless population on the Venice Boardwalk.

“The Board needs to provide emergency funding to HOST so I can expand their efforts across the County to properly address a crisis that has been allowed to metastasize on multiple fronts,” Villanueva wrote.

Villanueva’s actions surrounding the homeless situation on the Venice Boardwalk have been met with a range of reactions. Supporters include the Venice Stakeholders Association (VSA) and Venice United, the Venice Chamber of Commerce and Venice Beach Merchants Association.

“The Venice community has longed for just this kind intervention for several years,” said Mark Ryavec, VSA president and member of the Venice Neighborhood Council. “The City of Los Angeles has abandoned us and ignored our repeated calls for enforcement of the city ordinance that bans tents and camping in city parks and beaches.”

Los Angeles City Councilmember Mike Bonin, who represents Venice, could not immediately be reached for comment regarding Villanueva’s call for a state of emergency. Since the Sheriff announced his plan to clear the Boardwalk, however, Bonin has been among his harshest critics.

“Sheriff Villanueva and I are very different. I believe in treating people humanely and with dignity, whether they are housed or unhoused,” Bonin said in a statement posted to Twitter Wednesday. “The best, most effective, least expensive way to end homelessness is with housing, not with handcuffs.”

On Wednesday, Los Angeles City Council delayed a vote on a Bonin plan to offer housing to all people living in encampments on the Venice Boardwalk. The delay, which is procedural, pushes back the vote on Bonin’s proposal until July 1.

The $5 million dollar initiative would aim to provide temporary housing for the roughly 200 people living along Ocean Front Walk. Despite the delay, starting on Monday outreach workers from St. Joseph Center are set to begin engaging with homeless individuals along the Boardwalk to offer them housing, shelter and services.