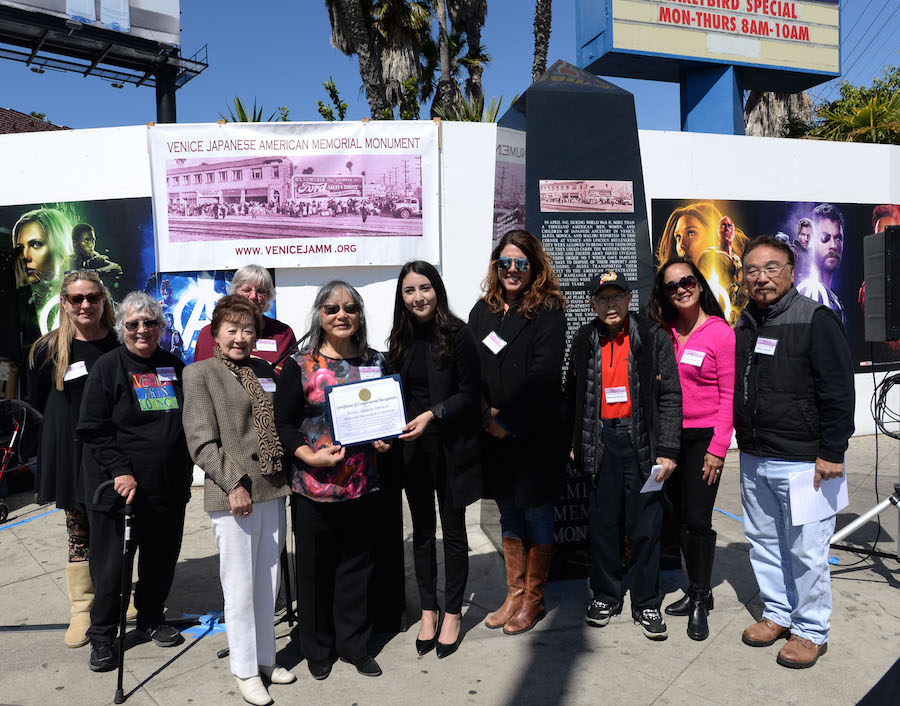 Grant will provide a stipend for Leslie, who will be working with the Manzanar Committee

In December, 2020, the Manzanar Committee and the Venice Japanese American Memorial Monument (VJAMM) Committee announced Leslie Aguilar of Los Angeles, a recent graduate of UCLA, as the inaugural recipient of the Arnold Maeda Manzanar Pilgrimage Grant. The grant will provide a stipend for Leslie, who will be working with the Manzanar Committee to help organize the 52nd Annual Manzanar Pilgrimage, to be held virtually on Saturday, April 24, 2021.

“I feel honored and excited to be given the opportunity to work alongside passionate individuals for this amazing event,” Leslie said.

The Arnold Maeda Manzanar Pilgrimage Grant commemorates and pays tribute to the late Arnold Maeda, who at 15 years of age, found himself and his parents forcibly removed from Santa Monica, by Executive Order 9066 signed by President Franklin D. Roosevelt on February 19, 1942. The Maeda family spent over three years in what would become the War Relocation Authority Camp at Manzanar, incarcerated without due process in violation of their Constitutional rights. Maeda became a founding and inspiring member of the Venice Japanese American Memorial Monument Committee in 2010, along with other former Manzanar incarcerees, and the Venice artists and activists who had been lobbying for a permanent memorial to the Japanese American experience since after September 11, 2001. On April 27, 2017, the VJAMM Committee dedicate the nine-and-a-half-foot tall obelisk of solid black granite before a crowd of over 200 people on the northwest corner of Venice and Lincoln Boulevards. At this intersection, some 1,000 persons of Japanese ancestry from Venice, Santa Monica, and Malibu had gathered in April, 1942 with only what they could carry, for the bumpy bus ride to Owens Valley in Inyo County where they would find their assigned barracks at Manzanar.

Leslie grew up in Los Angeles, where she had lived until her family moved two years ago to Bakersfield, California. Her parents, originally from Guatemala and Mexico, met in Los Angeles where they raised Leslie, and her sister, Leonela. Leslie attended Los Angeles Academy Middle School and Hollywood High School, where she enjoyed her history classes the most. According to her winning essay, Leslie was thirteen years old when she participated in a field trip to Manzanar National Historic Site with middle school teacher, Darrell Warren.

“I think that, for the first time, history felt so real, and not simply an event that I read in a book. It was also the first time that I learned something new about World War II and the impact it had on minority communities in the United States.”

In Leslie’s application essay, she wrote, “Ten year later, I am reading about Arnold Maeda’s life, and his story resembles one of the many stories I read about, that day I went to Manzanar [for the first time]. Arnold’s efforts to memorialize an intersection [at] Venice and Lincoln Boulevards, where many Japanese American families were awaiting the unknown, is a reminder to many of us that it has not been just a long time since that tragic time period. Arnold’s “commitment to social justice” has inspired Leslie to work with the Manzanar Committee on the Manzanar Pilgrimage. His “involvement with the Venice Japanese American Memorial Monument feels like a call to action to me as a future educator to be more involved in preserving history and ensuring the impact of Executive Order 9066 is not forgotten.”

Leslie says she looks “forward to getting my teaching credential and an MA [in Education] soon. She envisions herself “teaching social studies courses such as U. S. History and/or Ethnic Studies at the high school level, because she thinks “that history is so important to understand our present. Especially in this time of uncertainty, we have seen so much about how race, class, gender, etc. impact our daily lives. I think that students are also trying to understand and navigate so many of the recent events that have [just] happened.”

Leslie will be bringing her impressive technical skills to the Manzanar Committee, which include “data visualization, such as presentations, creating websites, and of course any research that has to be done.” With her event planning skills, Leslie can also “do things like scheduling and figuring out logistics in regards to contacting speakers for the [Manzanar Pilgrimage] event.”

In Leslie’s essay, she closes with this: “Having the opportunity to work with the Manzanar Committee . . . will allow me to engage more with Arnold Maeda’s vision, [that everyone remembers and no one forgets what happened to persons of Japanese ancestry during World War II]. I believe that the first-hand experiences of researching various materials, and working alongside other committee individuals would give me a more in-depth understanding of what Arnold Maeda’s family went through. I also believe I can apply the lessons I learn from this unique learning experience in my future . . . curriculum. Most importantly, I would be able to assist in creating a space, such as the Virtual Manzanar Pilgrimage, where stories like Arnold’s will be highlighted and made accessible for the general public.”

In her interview, Leslie closes with: “From pandemics to racial inequality, we can definitely look back in time and understand our present, and hopefully create solutions. That is why it is important to preserve and conserve history for future generations.” The VJAMM Committee looks forward with great anticipation to Leslie’s speaking at the Virtual VJAMM Commemoration scheduled for Thursday, April 15, 2021.

The VJAMM Committee congratulates Leslie Aguilar’s selection as the inaugural Arnold Maeda Manzanar Pilgrimage Grant recipient, which speaks to the inclusiveness of different nationalities in the U.S. who have studied the Japanese Americans’ forced removal from the West Coast, and their unjust incarceration in the ten War Relocation Authority Camps throughout the desolate interiors of the western United States. This history is United States history, says Phyllis Hayashibara, a VJAMM Committee member. This history is U. S. Constitutional history, adds Phyllis, quoting from the third paragraph on the front of the VJAMM obelisk: “May this Venice Japanese American Memorial Monument remind us to be forever vigilant about defending our Constitutional rights. The powers of government must never again perpetrate an injustice against any group based solely on ethnicity, gender, sexual orientation, race, or religion.”

To read a copy of Leslie Aguilar’s winning essay, please visit:www.venicejamm.org/our-progress: 2021 January 26. Click on the link.