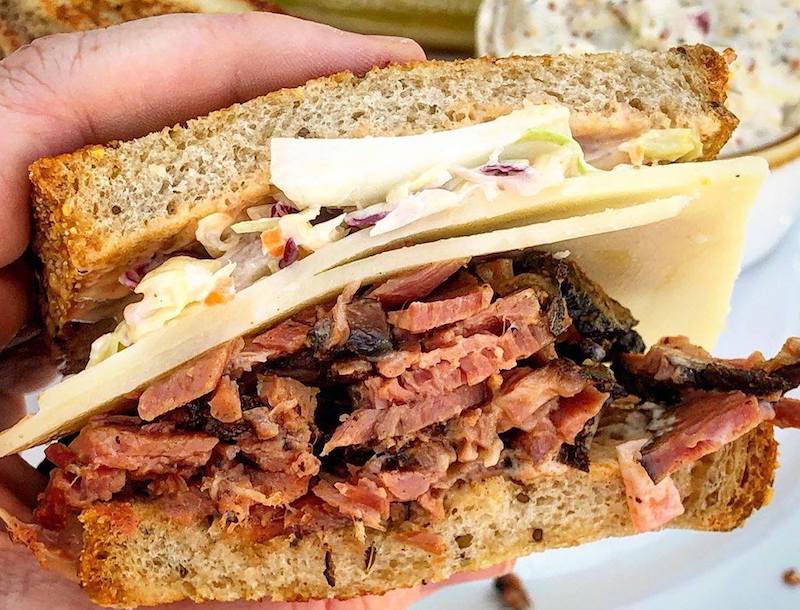 Despite outdoor dining expected to resume this week, a popular Marina del Rey deli frequented by the likes of Jerry Seinfeld, Leonardo DiCaprio and Shaquille O’Neal has announced it is closing for the time being. Jerry’s Patio Cafe & Bar in Marina del Rey–the offshoot of Jerry’s Famous Deli–posted a notice on their website announcing the closure: “This is only goodbye for now, as we shutter the doors to Jerry’s Patio Cafe & Bar. We endeavor to regroup and return to serve all of you, our loyal customers, again. Meanwhile, from all of us at Jerry’s and our affiliates, we thank you for your support over the past 42 years and look forward to sharing many more happy moments with you in the future.”

Did someone say macarons? A renowned French patisserie known for their double-decker macarons has opened a pop-up stand in Pacific Palisades. A Ladurée cart is open in Palisades Village near the CHANEL Beauté and will be there until February 28, offering primarily macarons. There are currently proper locations of Ladurée in Los Angeles in Beverly Hills and Glendale.

A Santa Monica Italian restaurant “reinventing the Italian hero by day and serving classic Italian cuisine by night,” is expanding. Heroic Italian (516 Santa Monica Blvd) this week opened a new location in Beverly Hills. The Beverly Hills restaurant, located at 8484 Wilshire, is offering Heroic’s popular sandwiches–from the eye catching OMG to the savory Quadronno–, pizzas, salads and soups from 11 a.m. to 3 p.m. The Santa Monica location, which features a more extensive dinner menu, has announced it will begin outdoor dining starting Friday. The restaurant also has a location in San Francisco.

Denver-based Smashburger is opening two new Los Angeles locations. As reported by What Now Los Angeles, the popular chain known for their burgers that are smashed on a grill with a metal press during the cooking process, is opening a location in Beverly Hills (100 N Cienega Blvd) and Manhattan Village (3026 N Sepulveda Blvd). Whenever these locations open, they will join six other Smashburgers in the state, including in Downtown LA and Torrence.

Pizzeria Known for $5.99 Pies to Open in Westwood-Area

A pizzeria known for their $5.99 pies will be opening a location on the Westside. Piara Pizza will open a restaurant at 11281 Santa Monica Boulevard within the next six months, What Now Los Angeles has reported. The restaurant will be the first on the Westside for the chain, which currently has 22 locations nationwide. A large cheese or pepperoni pizza at Piara Pizza is $5.99, an impressive price considering they tout no freezers and make dough in-house daily.

By Yo Venice Staff January 28, 2021
in Dining, News
Related Posts