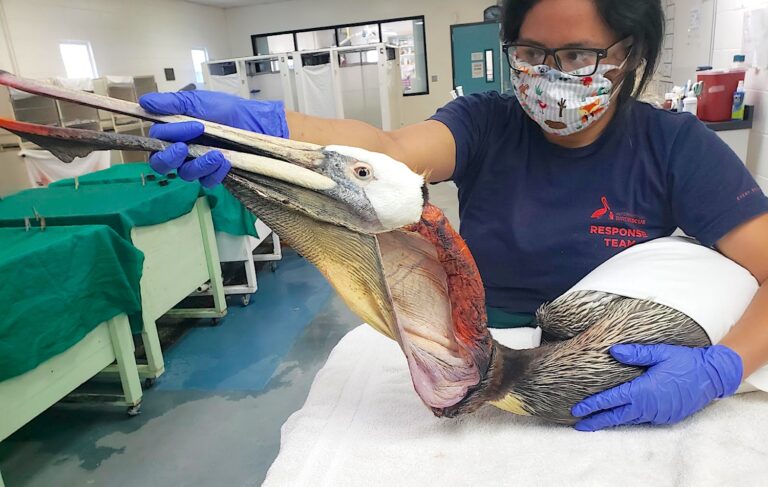 Who is harming Brown Pelicans in the Venice-area?

At least four California Brown Pelicans have come into care at International Bird Rescue in San Pedro, CA with identical, severe injuries to their pouches and necks, according to the wildlife nonprofit.

Three of the four pelicans were from the Marina del Rey area, the fourth was rescued near Ventura Harbor, the organization said. There was also a fifth bird with similar injuries that came into care in fall of 2019 – also from Ventura Harbor.

International Bird Rescue is offering a $5,000 reward for information leading to the conviction of the person or persons responsible for inflicting these horrible wounds on these iconic seabirds.

“We rely on the public to find injured animals. Please keep an eye out over the holidays, we are asking our community of bird lovers to help protect vulnerable wildlife from human violence,” International Bird Rescue said.

These recent injuries are different. Duerr says the wounds are straight cuts through both sides of the bird’s pouch, indicating foul play, extending back along one or both sides of the neck – peeling the skin off the bird’s neck. Although all of the victims briefly remain capable of flying away, they likely don’t get far. These wounds leave the pelicans in shock and doomed to die in pain.

“These injuries make our 2014 case “Pink the Pelican’s” wounds look like a cakewalk to repair in comparison,” Duerr said. “These are a whole new level of horrible.”

Back in the summer of 2014, Pink the Pelican, became the poster pelican for animal cruelty. The bird’s human-caused pouch slashing required more than 600 sutures to repair. With restorative surgery and care, the pelican was released back to the wild.

According to International Bird Rescue, the most recent victim not only had symmetrical cuts slicing through the entirety of the pouch, detaching it from the neck, but also had a straight cut into the muscle at the back of the neck consistent with a knife or machete cut.

“This poor bird came into Bird Rescue’s Los Angeles Wildlife Center in extremely critical condition. Unfortunately, the pelican had to be humanely euthanized because of the severity of the wounds,” International Bird Rescue said.

Brown Pelicans are protected by the Migratory Bird Treaty Act and harming them is a crime. If you have information about these cases or witness someone harming other wildlife, please call the CalTIP hotline 888-334-2258, the “CalTIP” app available in the App Store, or by texting “CALTIP”, followed by a space and the message, to 847411 (tip411). Please include penal code 597 in the report.

By Yo Venice Staff January 11, 2021
in News
Related Posts