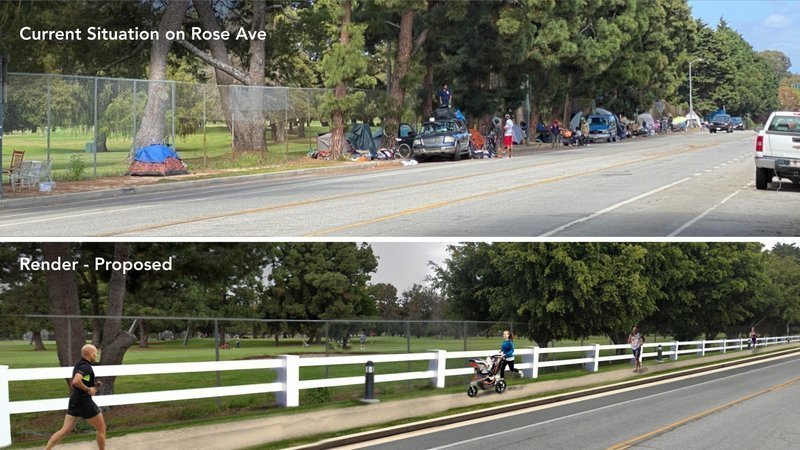 A petition circulating calls on the City of Los Angeles to take action that would make it illegal to camp next to Penmar Golf Course in Venice.

“The goal of this petition is to urge the City of Los Angeles to move the jurisdiction of the public walk path on the South Side of Penmar golf course to the Los Angeles Recreation and Parks Department. Once the strip of land’s jurisdiction is changed, it becomes park land and illegal to camp upon,” reads the petition. “Currently the land is presided over by the Los Angeles Department of Public Works. LADPW cannot enforce the no-camping rule and, as evidenced by the current condition of the walkway, cannot provide the surrounding neighborhoods with the public right-of-way we ALL have a right to use.”

According to the petition, the neighborhood (Rose-Penmar Parkway Beautification Association) is taking legal steps required to get this officially approved by the city. This includes filing a motion to be voted on by the Venice Neighborhood Council and the Los Angeles City Council.

Because of the COVID-19 outbreak, the March VNC meeting never occurred, and therefore the organizers asking for signatures so that they can take this directly to Councilmember Mike Bonin’s office. Yo! Venice has reached out to Councilmember Bonin’s office for comment, but they could not immediately be reached.

“Once the land is granted back to the Department of Recreation and Parks, we will then have an opportunity to pursue multiple means to beautify and improve the strip of land so that it can best serve our community. However, first thing’s first: we must encourage the city to give the land back to Recreation & Parks before anything further can happen.”

As of April 29, over 750 people have signed the petition, with many people saying camping hinders public safety.

“I’m signing because this path was always part of our community where I ran while pregnant, pushed my baby in his stroller and have always embraced as part of the neighborhood to be enjoyed by all of us. Now we are too frightened to go near it and it is unfair to take this away from all the community for a selfish few who refuse to accept shelter being offered on a weekly basis to all of them,” wrote signer Jenny Cooney.

In addition, organizers say as an addendum and backup plan, they are also pursuing the city-sanctioned Adopt-a-Median program.

Originally established in 1988, under the authority of the Board of Public Works, this program was designed as a way to empower neighborhoods to engage in community improvement efforts.